News Apeksha Bhateja Have $340,000 and Want to Vacation in a Survivalist's Paradise?
NewsO’Hare Airport Uses Barnyard Animals to Mow Grass

Sure, you could say Chicago’s O’Hare is pretty good at being one of the world’s largest airports and jetting thousands of travelers around the world everyday. But they couldn’t do it without the help of some humble unsung heroes: a barnyard gang of goats, sheep, llamas, and wild burros.

It’s true: while you’re enjoying the fruits of O’Hare’s splashy modernization projects in the terminal, farm animals are now grazing on the grounds nearby in a much more low-tech initiative. The two-dozen grass munchers are being employed by the environmentally conscious airport to keep its extensive grassy areas tidy. 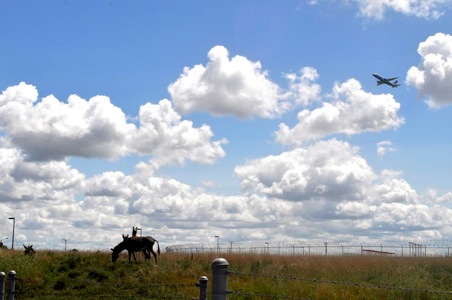 The operation is the whacky culmination of the airport’s established environmental dedication. Its vast grassy roofs are designed to reduce storm water runoff and lower the urban heat island effect of the airport’s sprawling concrete expanse; meanwhile, 1 million bees live in 28 beehives on a patch nearby, where they make honey that’s sold in the terminals and help replenish the declining bee population.

Herders have been commissioned to keep watch over the animals, making for a surreal scene of future-meets-past: planes ascend into the sky above the shepherd-like figures and roaming animals.

Some of the animals were donated from a rescue shelter just south of Chicago, while others came from Central Commissary Holdings LLC, which was raising a small goatherd to produce cheese for its Chicago restaurant, Butcher & the Burger. None of the animals seem to mind the roar of the jumbo jets. Just recently, a goat even gave birth to a kid. Its name? "O’Hare." 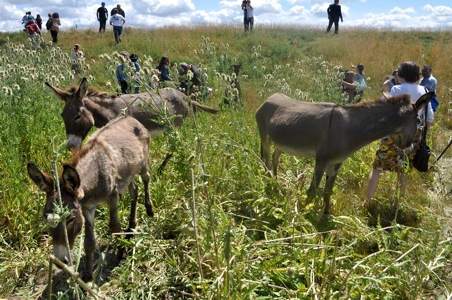 It seems crazy, but O’Hare isn’t even the first airport to implement such a plan. Predictably, San Francisco International employs a company called Goats R Us to clear brush each spring in an effort to protect nearby homes from potential fires. Airports in Atlanta and Seattle have similar programs.

In a world where similar labor is increasingly being replaced by computer technology, O’Hare’s herd is, ironically, forward-thinking in that it’s a step backward—it’s an environmentally responsible way to lower landscape maintenance costs.

Try and get a window seat next time you’re flying from Chicago, and who knows—you might get a glimpse of a llama as you ascend to 30,000 feet.