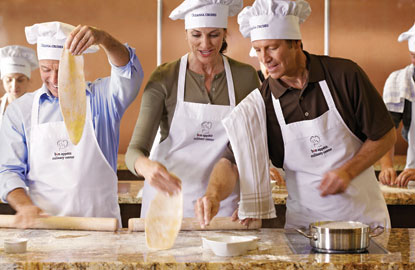 When Oceania Cruises initially developed plans for the line’s newest ships—Riviera and Marina—they wanted to focus on culinary activities to complement its renowned fleet-wide dining options. Oceania dreamed up the concept for a hands-on cooking school at sea and teamed with Bon Appétit magazine to make it happen. Today, travelers can look forward to their time spent in the Bon Appetit Culinary Centers—each outfitted with 24 fully equipped work stations—aboard both of these ships.

Marina‘s Temples & Palaces voyage, embarking Athens on October 22, will also feature a Bon Appétit Wine & Food Festival. That cruise will call upon Patmos, an overnight in Ashdod (for Jerusalem), Haifa, Limassol, Rhodes, Kusadasi (Ephesus), and an overnight in Istanbul.

Bostonians will immediately appreciate the choice of festival host on the October 22 voyage. It’s James Beard award-winner Chef Ken Oringer of the city’s Clio restaurant, one of "America’s Best New Restaurants" according to Esquire magazine. (It was new at the time.)