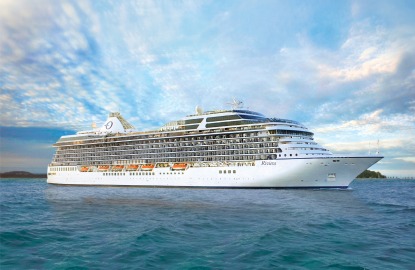 Cruisers looking forward to the upcoming launch of luxury line Oceania Cruises’ 1,250-passenger Riviera will have to wait just a bit longer. Labor strike delays at the shipyard near Genoa, Italy from where the Riviera is set to emerge have pushed back the maiden voyage of this seagoing gourmand’s haven from April 24 to May 16. Any guests who have already booked cabins on those initially scheduled inaugural sailings will be contacted by the cruise line or their travel agent to arrange alternative cruise dates, receive a future cruise credit, or be issued a full refund.

For those who have yet to book, but are onboard for a trip after the revised mid-May launch date, there’s a new reason to be reeled in. Foodies on the Riviera will delight in its many gourmet offerings, including 10 dining venues (a more-than-generous dollop for a ship of its size) and a hands-on Bon Appétit Culinary Center, but why not do dinner and a show? Oceania has announced that the Riviera will feature the legendary music of Andrew Lloyd Webber as part of its entertainment offerings. In partnership with Royal Theatrical Productions, they’ll be featuring "Now and Forever—The Music of Andrew Lloyd Webber." A 10-member cast of singers and dancers will perform music from Webber’s catalog of hit musicals like The Phantom of the Opera, Cats, and more. The production will join three already-planned shows, including "Up in Flames," showcasing Elton John and Billy Joel hits; "The Dawning of Aquarius," a 60s music review; and "Rock On," a rock-and-roll-infused love story.

Plus, you can get to your port of departure in style with the line’s new promotion, featuring business class airfare upgrades from just $999 per person, one-way, for select 2012 summer sailings. Additionally, Oceania is currently offering two-for-one deposits on all sail dates. Note this promotion expires on March 31. The Riviera will offer 10- to 15-night itineraries, with a base in the Mediterranean through fall, before traversing the Atlantic for a series of winter Panama Canal and Caribbean sailings; rates start at $1,999/person.