News Apeksha Bhateja What Are the Chances You'll Get Monkeypox at a Hotel?
NewsTop 5 NYC Hotel Holiday Happenings

Spending the evening at a swank New York hotel is fun any time of year—but it’s an even bigger treat during the festive month of December. From carolers at The Carlyle to ice skating at The Standard, we’ve gathered the best options for well-rounded merriment. 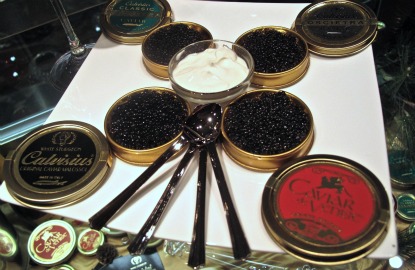 Indulge in Russian Delight at the Four Seasons

Get into the holiday spirit at the Four Seasons in Midtown—just a short walk from prime Fifth Avenue shopping—with an indulgent snack at the hotel’s Calvisius Caviar Lounge. Every Friday to Sunday in December, there’s a caviar apertivo special. For $99, taste the life of a Russian oligarch by sampling four premium caviars (about 10 grams of each variety) topped off with a glass of champagne or vodka.

The Kicker: Your drink of choice is essentially on the house. Ordered à la carte, the caviar would cost more than $100 alone.

Skate at The Stardard’s Ice Rink

Leave the rink at Rockefeller Center for the tourists. The hippest way to hit the ice is in the Meatpacking District at The Standard’s 3,000-square-foot ice skating rink. For $12 (plus $3 to rent skates), turn a few laps and take time to refresh at the adjoining Kaffehaus, where piping hot waffles, hot apple cider, and sweet and savory crepes will warm you right up. And if you don’t make it here for the holidays, fret not—it’s up all winter.

The Kicker: No need for dinner plans to interfere with skating time. The rink stays open until midnight during the week and 1 a.m. on weekends.

Tea and a Designer Tree at The Plaza

Festooned with hot pink boas and multicolored tinsel, the Christmas tree at The Plaza, decorated by designer Betsey Johnson, should be your first stop before heading over to the Palm Court for afternoon tea. The legendary restaurant serves high tea from 2 p.m. to 5 p.m. Your best deal is the Classic Tea ($49 for the basic tea) with such luxurious offerings as caviar, Maine lobster, truffled egg salad, and chocolate Viennese Sacher torte.

The Kicker: Have kids in tow? For a special holiday experience, order the Eloise Tea ($49 for the basic tea; $28 for kids under 12), which includes snacks such as grilled cheese, cucumber and buttered bread, and PB&J.

Rather than spending Christmas day wandering around the city, mosey over to the Crosby Street Hotel to hang out and watch a film with company. Catch the Woody Allen marathon at the hotel’s downstairs screening room, starting with Annie Hall at 2 p.m., Manhattan at 4 p.m. and Hannah and Her Sisters at 8 p.m. For $50, catch a movie and a three-course dinner, or for $25, snag a movie, cocktail, and bar plate.

The Kicker: The dinner and movie option is a steal. The three-course dinner menu is at the hotel’s Crosby Bar where a comparable meal would usually set you back in the neighborhood of $60, sans entertainment.

Sing Along While Feasting at The Carlyle

Do as the locals do and eat out on Christmas day. The Carlyle will be hosting carolers during a four-course prix fixe dinner feast. Three seatings are available at noon, 3:30 p.m. and 7 p.m., and the menu includes such classic options as poached Maine lobster tail, beef Wellington, honey-glazed country ham, and bûche de noel. To finish, Santa Claus will make a jolly cameo.

The Kicker: Dinner goes for $170 per person, not including gratuity. To make the bill go down easier, start the night at the hotel’s Bemelman’s Bar, a New York City institution beloved for its Bloody Mary.

Planning a trip to New York?