News Apeksha Bhateja What Are the Chances You'll Get Monkeypox at a Hotel?
NewsPot, Kettle, Passport, or The Time a Flight Attendant Forgot Her Passport

Pot, Kettle, Passport, or The Time a Flight Attendant Forgot Her Passport 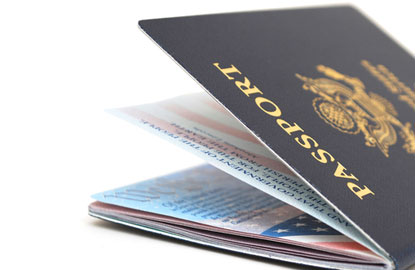 Gillian Brockell (@gbrockell) is a radio producer in Washington, D.C. She was a flight attendant for a major airline for five years and still gets a nervous tic when she sees an overhead bin left open mid-flight. Her stories have appeared in Cosmopolitan and The Frisky. She holds a master’s degree from Northwestern University and a bachelor’s from the University of Texas at Austin.

"I’m American. I don’t have to do that," the young man in 19A says, as I thrust the immigration forms toward him.

It’s shortly after takeoff, and the lead flight attendant has just made the announcement explaining the forms, in Spanish and English. It’s Spring Break, and as I walk through my section, I feel as though I have become the unwitting mother to 48 fraternity brothers.

He stares at me blankly.

"Called Mexico?" I add. Please, God, don’t let him be on the wrong flight. He takes the forms.

The young man behind him waves his hand frantically.

"How many beers can I have?" he shouts.

"There’s no set number," I say. "The rules are: If you appear to be intoxicated, then I legally can’t serve you." (That’s true.)

"But I’m not even drunk yet!" he sputters.

"I’m not saying you are, sir. I’m saying as long as you’re chill, I’ll keep serving you. Provided you’re over 21 and have a credit card."

"Well, I can’t serve doubles…or triples," I say. (That isn’t true, but probably a good idea.) "But I’d be happy to bring you one beer at a time, once I’m serving beverages. Right now I’m handing out immigration forms."

The key to being a good flight attendant is acceptance: Acceptance that your passengers don’t do this every day; they don’t know the aircraft like the back of their hands; and that it actually is your job to help people do the same thing for the one-millionth time.

On most flights, I am completely Zen. What’s this? You don’t know how to open the bathroom door? Please, allow me to show you. You can’t find a spot for your bag in the overhead bin? Fear not, we’ll just play a little suitcase Tetris and get you sorted.

I’m one of the nice flight attendants, I swear.

Just don’t ask me for my pen.

It may sound silly, but in the repetitive world of same aircraft, same route, same uniform, same meals, we flight attendants value our pens. It’s one of the few unique things we’re allowed. My favorites are the silver twist pens I pick up on my Hilton Hotel layovers.

I get only one pen back after they are passed around by the Drinka Lotta Brewski brothers. The return flight to the East Coast is no better. When we handed out the forms right after takeoff, no one said a thing. But four hours later, as we start to descend, five people ask me for a pen.

The sun is rising, I’ve been up all night, and I do not take it well.

"They need to have a section in travel magazines called ‘How Not to Be a Moron While Traveling,’" I gripe to my coworker. "Rule No. 1: Bring a freaking pen. Rule No. 2: Bring another pen for the person seated next to you."

As the last passengers disembark, a middle-aged woman races up the aisle waving my pen in the air.

"Here you go. Thanks so much!" she says.

I grudgingly thank her and gather my belongings.

And that’s when I realize: I don’t have my passport.

The crew searches the plane. I dump my purse out on the galley counter and ransack my roll-aboard, discovering that I don’t have my state-issued ID either. My only identification is my company badge.

Oh my God. I am the ultimate travel fail.

There’s nothing I can do but report myself to Customs and Border Protection. After a brief holding, I’m escorted to a special line for travel mishaps.

"Name the hospital where you were born," an officer barks. I don’t even know how he got my name already. "What’s your mother’s middle name? Your father’s? Where was your father born? What was your address when you applied for this passport?"

I answer, in rapid-fire, two-dozen questions about myself and barely pass. My bags are searched, and he tells me he could give me a "huge" fine if he wanted to, but he’s feeling charitable. Before letting me through, he marks my forms with a red marker: NON-COMPLIANT.

I’m a flight attendant to the core. It is my duty to be obsessed with compliance. That hurt.

Then, my pen died.