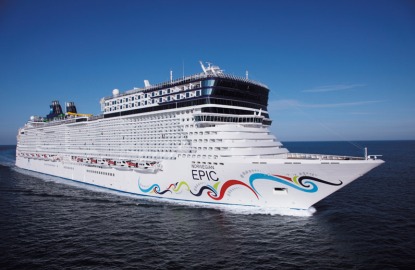 Norwegian Cruise Line has announced the latest in its steady stream of tech-savvy innovations. The Norwegian iConcierge smartphone app, which rolled out aboard the 4,100-passenger Norwegian Epic in late March, is being billed as the first app to allow passengers to talk and text with fellow cruisers while at sea, and will soon provide upgraded ship-to-shore (and vice versa) cell phone service capabilities.

The free app was developed by the cruise line in partnership with Allin Interactive, and is designed so that guests with iPhone, iPad, Android, and Windows 7-equipped devices can review information about ship services and make shore excursion (and soon dining) reservations. The app will also allow guests on each sailing to communicate with each other via unlimited phone calls and text messages, for one flat introductory rate of $7.95 (valid for the duration of the sailing). Some 1,500 guests have already downloaded it, and plans to expand the service to Norwegian’s fleet beyond Epic are in the works.

App enhancements that will improve cell phone services for "off-ship" calls are also being developed. Currently, calls between shore and ship can be notoriously costly (rates vary by customers’ cell service provider), but Norwegian iConcierge app users will soon be able to make calls at more affordable rates, starting at a comparatively reasonable $0.79/minute.

This latest offering follows a long history of the cruise line’s pioneering technological traditions: It was the first cruise line to offer Internet access at sea back in ’99; offered the industry’s first Wi-Fi equipped fleet in ’02; and launched the first fleet-wide cell phone service in ’06.

Norwegian Epic is currently offering 7-night Western Mediterranean sailings from Barcelona, on offer through fall (before the ship return to Miami for a series of 7-night Eastern Caribbean sailings). Rates from $449/person; www.ncl.com.