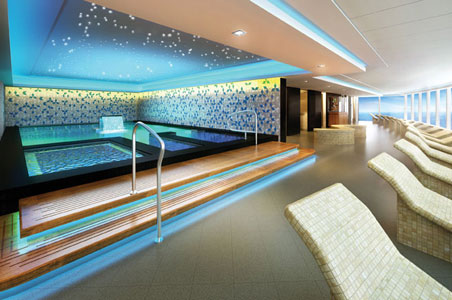 The buzz about Norwegian Breakaway, the line’s newest mega-ship, is getting louder. Shipbuilders are currently putting the finishing touches on this 4,000-passenger ship that’s set to launch in late April of 2013.

Norwegian Cruise Line is coyly releasing intriguing tidbits about the ship, and eager fans are gobbling them up in anticipation of the christening. The latest announcement reveals details about Breakaway‘s expansive spa that is sure to be a destination in and of itself.

Let’s start with the spa: Breakaway‘s spa will cover 23,000 square feet on two decks of the ship. Mandara will manage the facility. (If you’ve ever had a spa treatment at Disney’s Grand California Hotel, Wailea Beach Marriott Resort on Maui, or Atlantis on Paradise Island in the Bahamas, you’ve enjoyed the sweet spa services from Mandara.)

Two standout aspects of the spa include the thermal suite and Salt Room (pictured below), which is the first ever at sea. Salt therapies are in vogue these days because of anecdotal evidence that says treatments relieve respiratory issues, skin problems, and promote better sleep. With its grotto-like setting, the Salt Room will be a lovely place to while away the time. The thermal suite’s setting is equally tranquil with unobstructed views of the ocean. Guests will enjoy 13 heated loungers, a vitality pool, whirlpools, sauna, solarium, and steam room.

Additionally, Breakaway‘s spa will feature 22 treatment rooms offering 50 services for both men and women, including Elemis facials, massages, and even an oxygen treatment from bliss®. 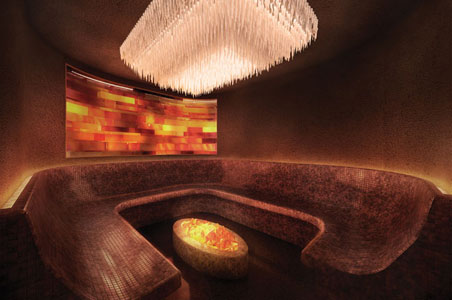 Acupuncture, teeth whitening, and cosmetic medical treatments—like Botox, Dysport, Restylane, and Perlane—will also be on the menu. A full-service salon (hair, nails, waxing) and barbershop (haircuts and shaves) will round out the pampering experience.

On the fitness side of things: The Breakaway will feature stationery bikes, cardio equipment, weights, and group classes combining yoga, tai chi, and meditation. Head to the spa for boot camp-style courses in kettle bell training, yoga, Pilates, and body sculpting or a fitness class developed by New York City’s beloved Rockettes. One-on-one personal training sessions, nutritional consultations, and metabolic testing are on the docket as well.

Finally, Breakaway will offer something a bit different: Nexersys® interactive fight training modules that allow for high-intensity, interval training against an avatar through the use of a simulator.

Breakaway will home port in New York City, starting May 2013. She’ll spend the summer sailing seven-day itineraries to Bermuda. From October 2013 through April 2014, the ship will offer voyages to the Bahamas and Florida as well as to the Southern Caribbean.