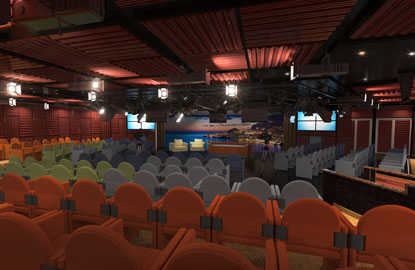 Cruise industry bigwigs Norwegian Cruise Line and Princess Cruises are shaking things up at sea with exciting innovations aboard two soon-to-debut additions to their fleets in 2013. Look to the Norwegian Breakaway for the cruise line’s largest water park and sports complex to date, spawning a slew of superlatives like Norwegian’s first mini-golf course and its most extensive ropes course at sea. And Princess Royal will be rolling out a high-tech onboard television studio, where guests can sit in on live daily broadcasts, musical entertainment, and more.

Set to launch next spring, the family-friendly 4,000-passenger Norwegian Breakaway will be making waves with the cruise line’s biggest Aqua Park, trimming its top decks with no fewer than five waterslides (including twin "Free Fall" slides, on which the floor drops out from underneath adrenaline-seeking guests), and a Nickelodeon-themed Kids’ Aqua Park. Plus, look for a massive three-stories-tall sports complex, complete with a nine-hole mini-golf course, basketball court, rock climbing wall, bungee trampoline, and ropes course (which incorporates "The Plank," a platform that extends eight feet over the ship’s side).

The Breakaway will operate year-round out of New York City, offering 7-night Bermuda cruises from May through October, followed by 7- to 12-night sailings to the Bahamas, Florida, and the Southern Caribbean for its winter season. Rates start at $549 per person; Breakaway.Ncl.com.

Princess Cruises is set to roll out an innovative, high-tech entertainment venue, the Princess Live! television studio. The studio will debut aboard the new 3,600-passenger Royal Princess when it launches in June 2013, allowing up to 280 guests to partake in the excitement of a working TV broadcast studio, with a series of live television broadcasts (including daily emissions of "The Wake Show"—the cruise line’s popular daily show featuring the cruise director and special ship guests—now, with a live audience), "unplugged" musical performances, and special events like murder mysteries, game shows, and cooking demos. For the time being, no registration or fees are required for guest participation.

The Royal Princess will sail regular 12-night Mediterranean cruises between Barcelona and Venice from June through September. Rates start at $2,299 per person; Princess.com/RoyalPrincess.