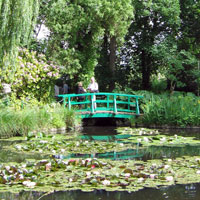 If you love Monet and Renoir you’re in good company—these fathers of Impressionism are among the most beloved painters of all time. But who would have thought that they also made amazing road-trip buddies? I "hit the road" with them during a recent trip to France, to savor the summer-long Impressionist Normandy Festival (June–September). Along the way I discovered towns and gardens that are a bevy of 3-D Gauguins, "virtual" Monets, and pop-up Pissarros. Here’s how to enjoy the best of France’s celebration of art.

Hitting the Road with Monet

With more than 150 special events, the Impressionist Normandy Festival reveals how the region became the "cradle of Impressionism" and forever influenced the history of world art. As a Monet junkie, I’ve spent a lifetime seduced by his paintings and this was the perfect opportunity to learn more about what exactly seduced him.

My week-long vacation proved to be an exuberant, intoxicating feast of art. And feast it is—in one tightly packed 100-mile stretch of coast you can take a road trip through the history of 19th-century painting, the giants of Impressionist art acting as your kindly tour guides. Many of us already know that a visit to any major museum is enough to virtually transport a viewer—by way of Monet’s luscious water-lily paintings, Boudin’s vibrant beach scenes, and Renoir’s Seine river vistas—to beautiful Normandy. But it is one thing to marvel at masters’ paintings in museums, and quite another to visit the actual sites and scenery that inspired them. I’ve compiled some highlights to take the guesswork out of the vast festival schedule and, perhaps, help you make some lasting impressions of your own.

Brushing Up on Impressionism

Why Normandy? The reasons, historians tell us, are simple and yet extraordinary. Back in the 1860s, Parisians were as stressed out as today’s New Yorkers and just as desperate to escape the frenzied effects of urban industrialization. Voila! The construction of a new rail line turned the westernmost province of France into the "Hamptons" of Paris, and almost overnight, scores of elegant Parisians flocked to the seaside towns of Deauville and Trouville to promenade by the sea in their Worth gowns. Upon returning home many of them bought examples of then-revolutionary beachscapes. And once back in Paris, liberated from the confines of their stuffy studios, artists traded shop talk about painting en plein air ("in the open air"). Normandy became the new promised land because, thanks to the sea and its river estuaries, the region had the most mercurial weather in France. It became the perfect place to capture the fleeting aspects of nature.

I Left My Heart In Etretat 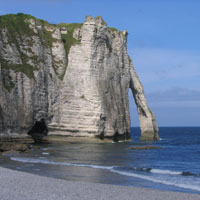 Etretat, a storybook fishermen’s village welcomed Monet one winter in 1868. This end-of-the-world spot might have been expressly composed for the artist by nature: views of spectacular chalk cliffs, soaring rock needles, and rolling sand dunes practically demand you to pick up brush and palette. Perched midway along Normandy’s Alabaster Coast, it is a Fisher-Price toy village with streets lined with 19th-century houses covered with sculpted wood figures. No matter there are no museums there—the entire village could be a museum exhibit.

The stunning white-sand beach and white-chalk rocks, such as the Manneporte—a limestone portal likened by author Guy de Maupassant to an elephant dipping its trunk into water—are major elements in the landscape. Here Monet became a pictorial rock-climber with the help of his famous "slotted box," built with compartments for six different canvases, allowing him to switch midstream from painting to painting, as weather patterns momentarily changed. I experienced this first-hand when an unexpected downpour threatened to terminate my climb up the cliff footpath. The guide was quick to reassure me, "Just wait: in Normandy we have great weather several times a day!" For an artist like Monet, intent on capturing the ephemeral (he would have been glued to the Weather Channel), Etretat’s constantly changing weather was ideal. For more information visit our destination guide or www.seine-maritime-tourisme.com to find a full list of hotels and restaurants. (If you want to join Offenbach and Victor Hugo’s names in the guest book stay at its Château Les Aygues.) Etretat rocks! 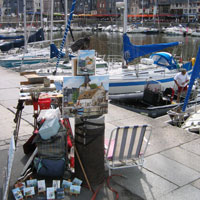 The Impressionists went on to colonize every point of the compass in Normandy, including Honfleur, whose harbor, lined with half-timbered houses, is so picturesque that I wished I knew how to paint—mere photographs don’t do it justice. A few blocks from the port is the town’s Musée Eugene Boudin, named to honor Honfleur’s most famous native son. The first to set up his easel outdoors (a revolutionary act at the time), he wound up holding painting sessions for the likes of Monet, Pissarro, and Jongkind at a pretty seaside auberge which today is the noted hotel Ferme St-Siméon (www.fermesaintsimeon.fr). During the festival, the museum is hosting a striking show called "Honfleur: Between Tradition and Modernity, 1820-1900" (through September 6th), which traces how earlier styles, including the School of Barbizon, were veritable springboards for Impressionism.

Lying at the center of Normandy’s compass is the bustling river port capital of Rouen, whose Fine Arts Museum is hosting the festival’s focal show, "A City for Impressionism: Monet, Pissarro, and Gauguin at Rouen" (www.unevillepourlimpressionnisme.fr, through September 26th). The high point is the room hung with 11 of the 31 paintings Monet did over a three-month period, in 1892, of Rouen Cathedral. "Everything changes even if it is made of stone," said Monet of this series—clearly the cathedral façade was simply a pretext to capture the essence of every hour from dawn to twilight. Embrace your inner Monet by heading across from the cathedral to Rouen’s tourist office and signing up for "Learn to Paint like Monet," a mini-tutorial that allows you—thanks to a professional artist on hand, a watercolor set, and a traced outline of the cathedral façade—to paint your own Rouen cathedral. By a stroke of luck, I wound up sitting on the exact spot (second floor front, third window from the right) where Monet once set up his easel. Alas, my "Monet" wound up looking like a… Picasso.

We’re in the Monet

Fittingly, my final stop was the picturesque village of Giverny, where Monet spent forty-five years (until his death in 1926) tweaking the terrain of a former farm into a veritable live-in Impressionist painting. Adjacent to the Claude Monet House (www.fondation-monet.com)—its cozy rooms, done up in sugared-almond hues, Art Nouveau furniture, and Japanese prints, are open to the public—he created two legendary gardens (like the house, open May through October). Some people refer to the Clos Normand as "the Liberace of gardens" due to its avalanche of pink flowers, but a stroll here underscores how Monet regarded the garden as a painting (he said, "the most beautiful masterpiece I have done is my garden"), and vice versa. I confess I shed a tear upon entering the Water Lily Garden, set with the famed Japanese footbridge and water-lily pond. Magically, the real world appeared to dissolve and, just for a moment, I had the sensation of stepping into a 19th-century Impressionist painting. This garden is so precisely similar to his paintings that I realized the Impressionists had nothing to invent—it was all there, in Normandy, to begin with. 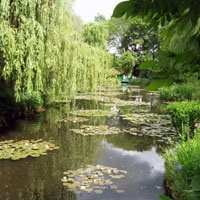 I arrived at Giverny around 4 pm (during summer in Normandy it stays light until 10 pm)—while the water-lily flowers had closed for the night I was just in time to see a gardener cleaning the pond from a rowboat. In a flash I recalled the "late" water-lily paintings—the celebrated canvases that show a horizonless sky reflected in the water including one that sold for $80 million at Christie’s last year—and realized that Monet must have painted those from a similar rowboat. These paintings were done near the end of his life when he was suffering from cataracts brought on by incessant smoking and too much sun. Ghost colors, blurry shapes, and lapidary shades of blues (he could no longer see reds or yellows) helped these works open the door to the new age of 20th-century abstraction. The garden at Giverny was truly an avant-garden.

Not far from Monet’s house is Giverny’s sleek new Musée des Impressionistes (www.mdig.fr), which just hosted a major show of the festival, "Impressionism Along the Seine River" (through July 18th) and now features an exhibition of photographs by Olivier Mériel of towns immortalized by the Impressionists (through October 31st). But be sure to continue several blocks down Rue Claude-Monet past the museum to the Hotel Baudy (restaurantbaudy.com). Painted cake-frosting pink, this was the place where droves of artists stayed while visiting chez Monet. Today, Renoir could enter the dining salon (it is now only a restaurant) and feel entirely at home, so little has anything changed. Out back is one of the most beautiful rose gardens in France, whose winding paths take you to a tiny studio-hut which Cézanne once briefly called home. 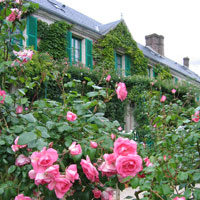 Unfortunately, I won’t be in Normandy to enjoy the most communal event of the festival, but this is the perfect time to make your own plans. The indoor-outdoor Great Impressionist Ball will be held in Rouen on September 24th, the last day of the festival. The public is invited to attend on the condition that they dress only in white, to create a giant blank canvas onto which a master lighting expert will project constantly changing splashes of color—similar to brushwork—an effect that will be captured on video and instantly played on large screens. Start planning your own pilgrimage by getting the full run-down on the Impressionist Normandy Festival Web site or www.seine-maritime-tourisme.com—and then get ready to book your own flight to Monet-land!

Often turning a 2 hour trip into a 3 hour ordeal, the Parisian exodus every weekend can gridlock the A13 highway to Rouen so it’s best to opt for the frequent trains that leave every two hours from Paris’s Gare St-Lazare (70 minutes, €19.50) for Rouen. From Normandy’s capital you can head to Normandy’s coast by taking the train to Deauville and then using buses (www.busverts.fr and www.cars-perier.fr) to Etretat and Honfleur. You can also take a train from Paris directly to Deauville (2 hrs, €26) or one to Le Havre (2 hrs, €27); from either station buses leave for the coastal towns. As for Giverny, a train from the Gare St-Lazare on the Rouen-Le Havre line heads to Vernon (which also has rail links with Rouen), from which buses, taxis, or a long hike will connect you to Monet’s village six miles away.