Dishing on the New Nobu Hotel 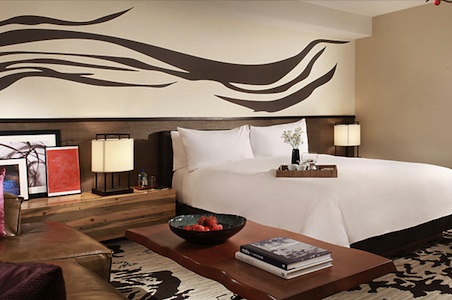 Largest, first, and luxuriant are the buzzwords swirling around Nobu's conquering of Caesars Palace. The first Nobu Hotel will unveil 181 rooms, including 18 luxury suites, on Feb. 4, creating a boutique hotel out of Caesars Palace’s existing Centurian Tower.

The suites were designed by David Rockwell, whose recent work in Las Vegas includes the Cosmopolitan of Las Vegas and Crystals shopping center. High-end suites include complimentary valet and free access to the Pure Nightclub and Qua Bath & Spa's fitness center. The largest Nobu suites include their own sushi counter space for ordering up a personalized sushi chef. While the luxury suites can be prices as high as $4,000 a night, standard rooms are currently priced from $249. Guests arrive at the hotel and check in, in private, in their own room via iPad. A signature welcome of hot tea will be served on arrival.

The room designs use a neutral base accented by purple and aqua. Abstract designs on the carpet and wall coverings are inspired by landforms and seascapes. Patterned carpets in the hallways recall cherry blossoms and Japanese Zen gardens, and many of the design features are inspired by origami.

The Nobu touch even extends to the mini-bar with unusual Dean & DeLuca items and a custom Nobu-branded Pocky, a popular Japanese chocolate-covered pretzel snack. Japanese beverages and green teas are also within the mini-bar. Guests may never want to leave their rooms with a room service menu created by Nobu Matsuhisa himself and available 24 hours a day with options such as green-tea waffles with banana for breakfast or for lunch the RLT, a Nobu spin on the BLT with rock shrimp, butter lettuce, and Maui onion tomato salsa in a creamy spicy sauce. Naturally, the Nobu Hotel will feature an eponymous restaurant that will welcome both hotel and Caesars Palace guests. This will be the world’s largest Nobu restaurant, clocking in at 12,775 square feet and also designed by Rockwell. Japanese touches include a bamboo exterior resembling a traditional Japanese flower arranging basket. Traditional elements such as stone, wood and paper marry a very contemporary and colorful vision.

Even the seating is uniquely stylish with dining pods hidden behind leather-upholstered screens. Oversized light fixtures were created to resemble Japanese tea whisks. Less obscure, diners will recognize kimonos hanging from the ceilings.

Befitting Las Vegas, a lounge will be connected to the restaurant, featuring a 15-person bar for optimum people watching.

This is the second Nobu restaurant in Vegas, with the first at the Hard Rock Hotel. A different menu will be created for this new venture.

The stakes are high for the Caesars Palace property to succeed with a worldwide chain of Nobu Hotels planned. A second is already in the works in Riyadh, Saudi Arabia, and others are scheduled for London and Bahrain.