Nicaragua is Ready for Prime Time

Nicaragua’s natural beauty is the real star of the most recent edition of Survivor—a series long known for highlighting fabulous locales. Unlike contestants, though, visitors needn’t subsist on rice and bugs or compete in over-the-top challenges to enjoy them. Be sure to check out our top five experiences before extinguishing your torch and returning home. 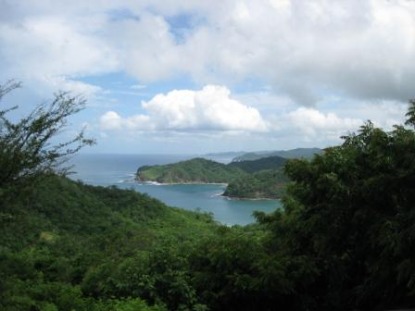 Pounding Surf
In a place lapped by both the Pacific Ocean and the Caribbean Sea, it’s no surprise there are ample opportunities for on-the-water adventures. If you’re interested in reef diving you’ll have to hit the east coast. But if you want to Hang 10, you can do it a stone’s throw from the Survivor set. The best breaks are clustered near where the reality show was shot, in Nicaragua’s southwest corner close the Costa Rican border. San Juan del Sur is Surf Central with Playa Maderas, Playa Hermosa, Los Perros, Popoyo and Manzanillo being other top spots. Yet persistent prevailing winds and miles of blissful beach means you can choose from loads of isolated areasmdash;many of them accessible only by boat or 4WD. 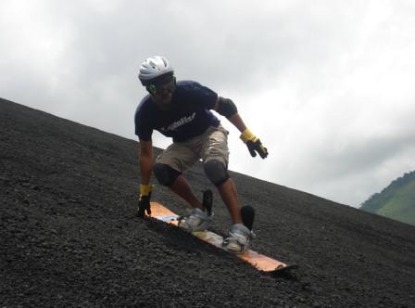 Bubbling Volcanoes
Central American nations are volcanic hotspots, and Nicaragua—boasting 19—is no exception. Momotombo, with its symmetrical cloud-wreathed cone, wins the "most photogenic" prize. Masaya is the most accessible since visitors can drive right to the rim. (It is arguably the most dramatic, too. Peer into the 2000-foot wide Santiago Crater and you’ll understand why conquistadors considered it the mouth of hell.) However, Cerro Negro is the most fun. The Black Hill last erupted in 1999 and the surrounding landscape bears witness to that: devoid of vegetation it looks almost post-apocalytic. The upside is you can ascend on foot; then zoom down the cinder-coated slope on a board or sled. 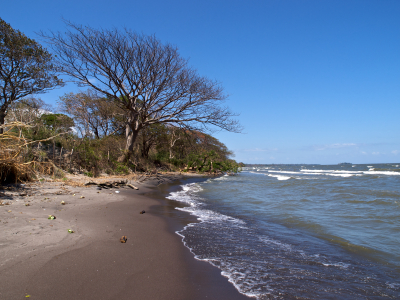 Lovely Lakes
Nicas call their country the "The Land of Lakes and Volcanoes." Among the former, Lake Nicaragua (aka Cocibolca) stands out. The 10th largest freshwater lake in the world, it covers 3,200 square miles and is dotted with leafy islands. One of them—Ometepe—was named Nicaragua’s third UNESCO Biosphere Reserve earlier this year. Taking the ferry there from San Jorge you can channel your inner Jeff Probst by hiking its twin peaks, communing with monkeys in the rainforest, and ogling pre-Colombian statues that look suspiciously like oversized immunity idols. Alternately, base yourself in Granada and explore the easy way, opting for a quick lake tour in a kayak or motorized launch. 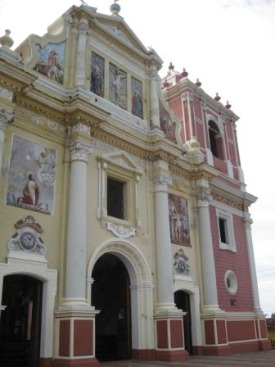 Colonial Cities
Though it’s been dubbed "The Next Costa Rica," Nicaragua has something its famous neighbor lacks: namely two sublime colonial cities, Granada and León, founded by Spaniards in the early 1500s. Just gritty enough to feel like discoveries, they’re notable for gorgeous Baroque churches (including Granada’s Iglesia de la Merced and León’s Basílica de la Asunción, the largest church in Central America), Kool Aid-colored townhouses, plus lively squares lined with vendors selling handmade trinkets for a few bucks each. They also have a growing number of quality restaurants where you can enjoy a multi-course meal featuring fresh local seafood or Churrasco-style steak for under $25. 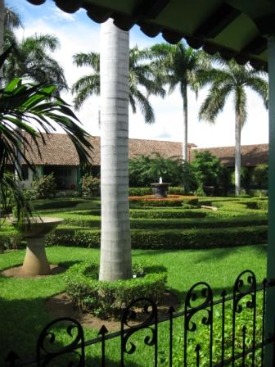 Luxe Lodgings
Hotels are a terrific value too, so you don’t have to win Survivor’s million-dollar prize to sleep in style. Take León’s Hotel el Convento. Divine doubles at this converted convent, complete with private garden and cloistered arcade go for $112; while those at Grenada’s Hotel Plaza Colón (a restored mansion with a cool courtyard pool) start at $89. For something worthy of a reward challenge, try Morgan’s Rock Hacienda & Ecolodge. Located 35 minutes from San Juan del Sur, it has 15 handsome thatched bungalows and a broad selection of eco-oriented activities. Packages start at $195 per person per night.

The Fine Print
December and January, when the dry season is just beginning, are the best months to go. American Airlines can get you there direct from Miami in about two hours and 10 minutes. Once you arrive, it’s wise to hook up with an experienced guide who can arrange excursions at an affordable price (you can e-mail my favorite, Guillermo Bobadilla, at [email protected]).