News Apeksha Bhateja What Are the Chances You'll Get Monkeypox at a Hotel?
NewsNiagara Falls from Every Angle

Niagara Falls from Every Angle 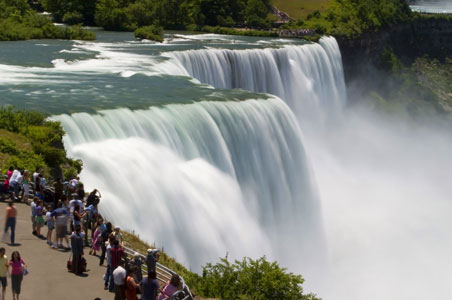 There are higher waterfalls than Niagara Falls, sure. But the width and incredible volume of the waterfall that straddles the border of Canada and the US is a bucket-list-worthy sight to behold. And when it comes to actually doing that beholding, there are almost as many options for travelers as there are gallons of rushing water careening over the cliffs.

Facing the Falls: The beauty of Niagara Falls is on full display at Ontario’s Table Rock, which offers postcard-worthy views of the three waterfalls, in order of size: Horseshoe Falls (also known as Canadian Falls), American Falls, and Bridal Veil Falls.

Behind the Falls: For a totally different view of a waterfall than you’re used to, descend into a series of tunnels and peer through portholes for a true behind-the-scenes peek at Horseshoe Falls, which gushes at 34 million gallons a minute during the summertime. Observation decks at the foot of the Falls grant a side view and fantastic photo op—just make sure to wear the poncho you’re given, as you will get wet.

Signs along the tunnels provide more information about the area, like tales of the daredevils who’ve contributed to Niagara’s popularity. That includes Annie Edson Taylor, a schoolteacher who went over the Falls in 1901 in a barrel. (Although she sustained only slight cuts and bruises, she didn’t recommend the feat to others.)

Near the Falls: Want to hang out right in the middle of Niagara Falls? You’ll have the sensation of being in the thick of things with the aptly named Maid of the Mist, a half-hour boat ride that lets you feel the roar of the Falls as you get up close and personal with the spraying mist. North America’s longest-running tourist attraction (it started in 1846), Maid of the Mist leaves from both the American and Canadian sides. You’ll be in good company if you go, as the Prince of Wales, Theodore Roosevelt, and Marilyn Monroe have all taken the ride.

Really near the Falls: The closest you can get to Niagara Falls is on the US side at Cave of the Winds. After taking an elevator 175 feet down into Niagara Gorge in a provided poncho and sandals, carefully make your way over wooden walkways (they’re rebuilt every year!) to the Hurricane Deck to stand a mere 20 feet from the smaller-but-still-mighty Bridal Veil Falls. At times, the experience can feel something like a tropical storm.

To the side of the Falls: In New York, Luna Island, Terrapin Point on Goat Island, and the Observation Tower in Prospect Point Park that juts out over Niagara Gorge all offer interesting perspectives on various parts of the Falls.

High above the Falls: From inside the climate-controlled gondolas of the Niagara SkyWheel in Canada, you’ll get a bird’s-eye view 175 feet up on your eight- to 12-minute ride. Try going at night when the Falls are lit up with multicolored lights—it’s particularly pretty during the fireworks show, which runs until September 1 on Fridays, Sundays, and holidays at 10 pm.

Even higher above the Falls: A glass elevator smoothly rockets riders to the top of Ontario’s Skylon Tower, 775 feet up in the air. In addition to the panoramic scene of the Falls, on a clear day, you can see both Toronto and Buffalo’s skylines, along with 8,000 square miles of terrain. Placards all around the 360-degree observation deck help you identify what you’re spotting near and afar.

Have some of that thrill-seeker spirit in you? You can’t use a barrel to ride in anymore, but you can use a helicopter. From the American side, hop on with Rainbow Air, whose "limousines of the sky" offer everyone a window seat and serious sightseeing bragging rights.