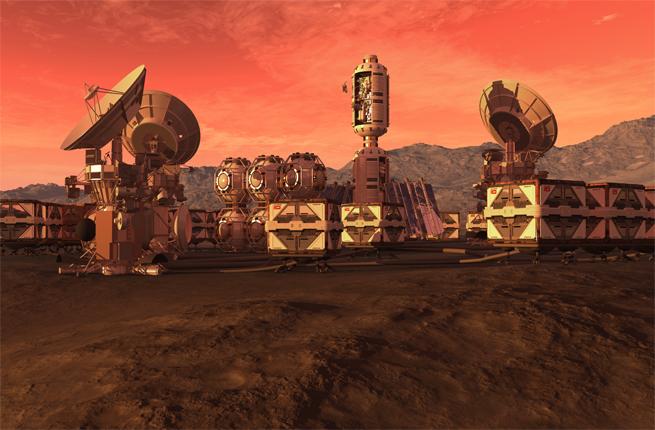 The United Arab Emirates have announced plans to build a city on Mars for human people to live in—in 100 years.

“'Mars 2117' is a seed we are sowing today to reap the fruit of new generations led by a passion for science and advancing human knowledge,” said UAE President Sheikh Mohammed bin Rashid Maktom this week. The UAE space agency was formed in 2014, and Maktom is eager to get in on that space action, stating, “The landing of people on other planets has been a longtime dream for humans. Our aim is that the UAE will spearhead international efforts to make this dream a reality.”

This plan might seem a little outlandish, but, hey, 40 years ago Dubai was a quiet fishing village and now it’s one of the most futuristic cities in the world—their firefighters wear jetpacks, for crying out loud. Why not build a city on Mars in 100 years? It’s 100 years from now—anything could happen! We could figure out how to do this, probably!

CNBC reported that it will be most likely a city of about 600,000 people, but no other details of the plan have been released at this time—probably because it is 100 years away, and there aren’t any details yet.

The UAE have sooner plans to send a space probe to orbit Mars in 2021 called “Mars Hope,” which will be the first Arab probe sent to space. Note: the UAE space agency also doesn’t happen to have any rockets—yet. They do have a lot of money to spend, which can probably get them one sometime in the next hundred years.

At this point in time, no human person has ever been to Mars for several reasons such as “we don’t know how to get them there” and “we don’t know how to build houses on Mars.” Good thing the UAE has 100 years to figure it out. We have full faith in them—really. Have you seen Dubai? It’s exquisitely futuristic.

Until then, plan a trip with Fodor’s Guide to Dubai.