People may be smiling politely as you board with your emotional support rooster/mini horse/bearded dragon, but here’s what they’re actually thinking.

For some of us, being seated near a dog or a cat is honestly just an unexpected bonus while traveling. For others, it’s just an allergy flare-up wearing a collar. Indeed, the answer to the seemingly straightforward question of “Should animals be allowed in an airplane cabin?” is dependent on so many variables, that it’s essentially impossible to settle on a one-size-fits-all policy.

But a new survey from Upgraded Points takes a closer look at service and emotional support animals and how people feel about traveling with them.

As a baseline, 79% of people surveyed agreed that animals should be allowed in the cabin of a plane. But as anyone who can recall the menagerie of unusual emotional support animals that find their way into news roundups can attest, the matter isn’t nearly as cut and dry as “cat and/or dog.” But just over half of people surveyed said that emotional support animals (which can be any type of pet) should have the same rights as service dogs (which is a canine that’s been trained for a specific function). 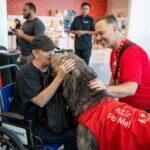 The most common reason people said animals could be a problem on planes was that people may be allergic and 27% said the animals needing excess space could cause an issue (clearly 72% of those surveyed didn’t see these two service giants).

When the survey looks into what types of animals should be allowed on planes, dogs were far and away deemed to be the most acceptable. But what was more surprising were the types of animals any percentage of people agreed were acceptable: parrots (11%), snakes (8%), miniature horses (5%), and peacocks (just under 4%). Sure, from a mathematical point of view these numbers may be on the low side, but it’s still surprising that as many as four people out of 100 were presented with the idea of sharing a tiny, hermetically sealed space with these liquor store wrecking agents of chaos known as peacocks and responded, “Yeah, I’m cool with that.”

We all get a good chuckle from tales of emotional support squirrels and mini horses, but in actuality, you’re unlikely to be faced with the dilemma of what you should do if your seatmate falls outside the cat or dog binary.

So while there’s no easy way to determine pet policies that fairly accommodate every person (and animal) in every scenario, there is one thing you can do: Just try and be the best human possible. Don’t be judgmental of people for having animals that—though it may not always be visible to the naked eye—genuinely need assistance or relief. And, on the other side of the spectrum, if you’re someone whose only reason for wanting your pet in the cabin with you is that you really, really want to, don’t abuse the system—something the survey showed 55% believe pet owners have done.