Picture the scene. The soft dawn light brushes the ocean before falling across a grisly sight. The shape of a body washed up on the shoreline: a young female. The corpse looks fresh—the incident must have taken place relatively recently. Apart from the clear wounds on her body, she looks otherwise healthy.

“Can you determine cause of death?”

“The post-mortem will tell us for sure but, at first glance, it looks like blunt force trauma…as if she was struck by a ship.”

No, this isn’t the latest episode of Crime Scene Investigation and our victim is not a stereotypical beautiful blonde. In fact, she’s a beached harbor porpoise.

A beaching—or stranding—is, essentially, when a marine animal ends up on land. You might be surprised to hear this scene (minus my imagined CSI-inspired dialogue) is common, with an estimated 1,000 annual strandings in the U.K. alone. Enter the “CSI of the Sea,” Rob Deaville, Project Manager at the Zoological Society of London’s Cetacean Strandings Investigation Programme (CSIP). It’s his job to get to the bottom of the mysterious beachings of whales, dolphins, and other marine animals.

Some animals die and wash ashore while others strand alive and die on the scene (sadly, even with the best rescue efforts, survival rates are low because the creature usually has an underlying illness, injury, or other reason that caused it to strand). Either way, this is when Deaville’s job kicks in.

Just like a human post-mortem, the necropsy—led by a vet—offers clues around the reason behind a stranding. Deaville has been involved with hundreds, if not thousands, over his 20-something year career. “Your main drive,” he explains “is to try and find out how it died.” As a crime drama fanatic, the process he describes sounds familiar: “You’re essentially going through the whole animal externally and internally, looking for evidence of abnormality…and then you try and relate that back to the overall condition [of] the animal.” Putting together the clues, the team tries to work out the cause of death and whether it’s natural or man-made. And if a threat is caused by humans, what can be done about it?

As you might expect, it can be gruesome. For example, in one tweet, Deaville shared a graphic photo of a harbor porpoise with “extensive injuries consistent with grey seal attack.” If you look closely, you can even see the bite marks. With bycatch—when an animal is unintentionally caught in a fishing net—the specimen will appear to be fat with evidence of recent feeding (often, dolphins swim into fishing nets for a snack) alongside signs of drowning or entrapment. In some cases, Deaville has even seen the net marks on the body. Disease cases tend to be thin with significant parasite burdens or have certain bacteria present. With ship strikes, he continues, “you get blunt force trauma or parallel prop[eller] cuts.” There are almost endless reasons why a cetacean might strand, he adds: “We haven’t even gone to noise [pollution] and everything else.”

While some—like the porpoise clearly attacked by a seal—are open-and-shut cases, others are more complex. For example, it can be hard to categorically prove chemical exposure is the cause of death, despite evidence of diseased animals having higher levels of exposure to pollutants than healthy animals.

Anthropogenic threats—such as bycatch, entanglement in fishing gear, ship strikes, and the impact of pollution—are of particular interest to the CSIP team. Getting a better handle on how human activity causes strandings enables them to consider what policies could mitigate these impacts and better protect marine species. Deaville is especially concerned about chemical pollution, saying: “Everything we do can end up in the marine environment in some form or other.” While the public is increasingly aware of plastic pollution—it’s hard to ignore the disturbing image of a turtle caught in a plastic bag—chemical pollution, less visual, is more insidious. Even pollutants that have been banned for decades—such as PCBs—are incredibly persistent and continue to cause problems in the marine environment for years if not decades to come.

Although his work investigates how human threats can be reduced, Deaville is keen to stress that “strandings have always happened and they always will.” Even if we reduce or eliminate man-made threats, there are still many natural reasons marine species will die and end up onshore.

While the study of dead animals might seem morbid, this research is vitally important: “It allows us a window into their lives, not just their deaths,” Deaville explains. Many marine species—particularly deep-diving animals such as the mysterious beaked whale—are hard to study in the wild. Strandings give researchers the chance to collect data they otherwise couldn’t source from a live animal: stomach contents reveal what they’ve been feeding on and if they’ve ingested plastic, blubber can be tested for contaminants, gonads give you a glimpse into their life history—and more. “There’s a whole range of research and areas of research that are really only possible from the study of dead animals,” says Deaville.

Strandings can also have a “profound effect” on bystanders. Deaville elaborates: “You’re never going to get a chance to see a sperm whale in your life and then suddenly they just turn up on your doorstep. That has massive impact on people” and can make them appreciate their local marine environment more and want to protect it. 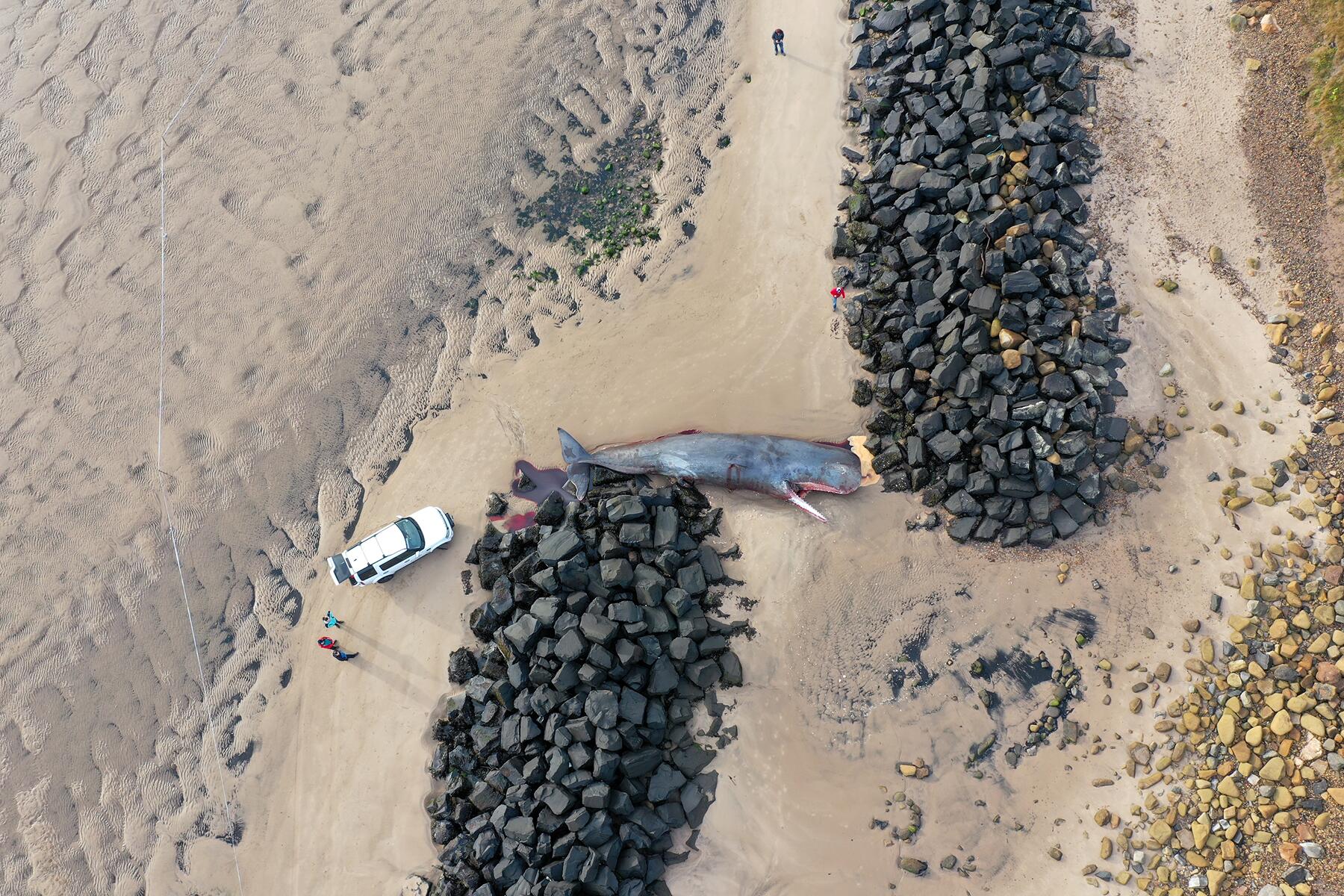 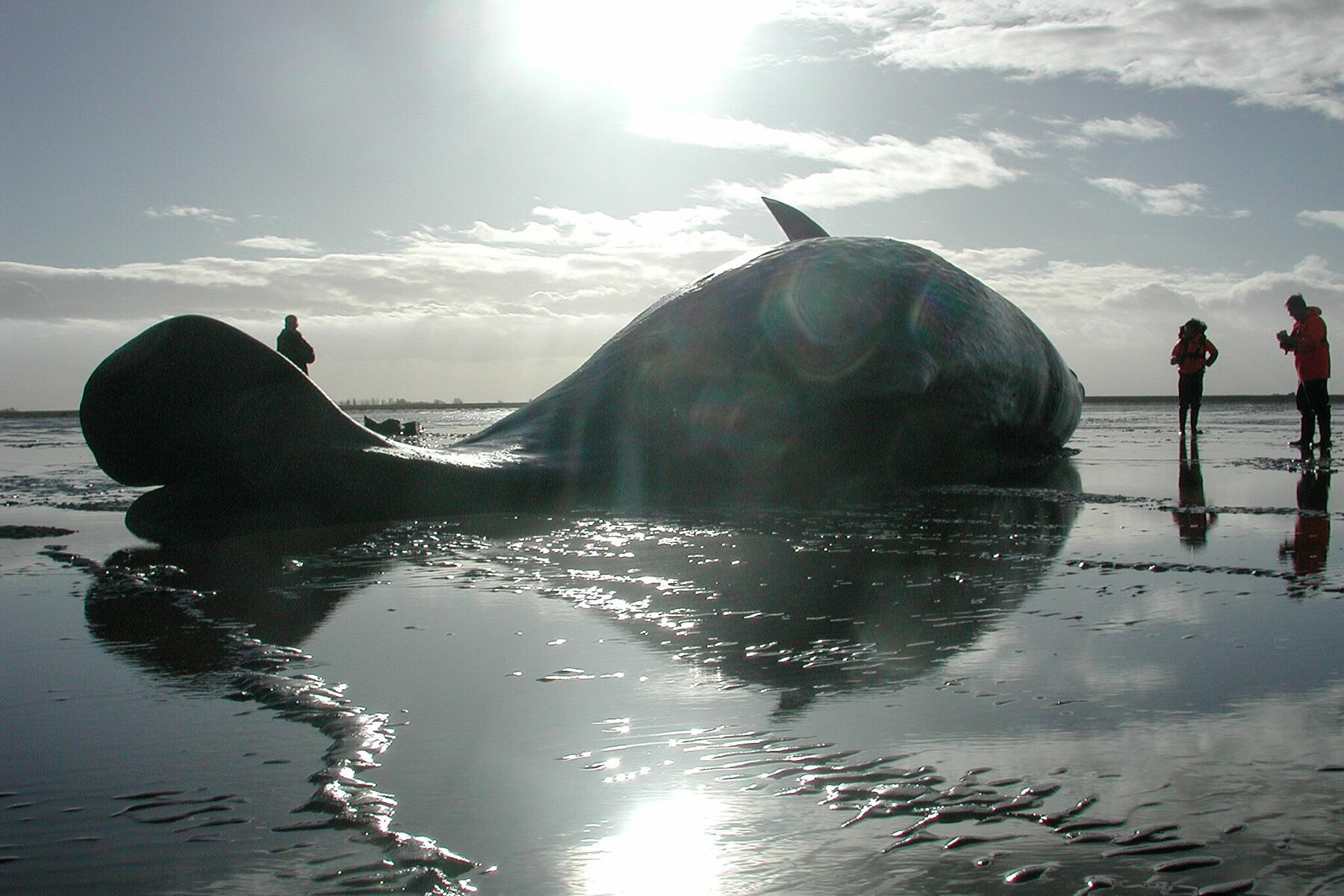 1. A sperm whale in Newbiggin-by-the-Sea, England.Rob Deaville 2. Another sperm whale, this one is in the Wash, an estuary in East Anglia, England.

A decrease in strandings can—perhaps surprisingly—also be cause for concern. Because of the many natural reasons an animal might strand, a sharp decline in the stranding rate of a certain species “might indicate they’re not there anymore.” Deaville mentions humpback whales: over the 100 years that we have U.K. data, no humpbacks stranded for 80 years because the population density was so low. Since the International Whaling Commission banned commercial whaling in the 1980s, humpbacks have begun to strand again in the U.K. which tells us that humpback populations have begun to recover.

For Deaville and his team, there’s always more to do (he lists off issues such as the welfare problem caused by bycatch, the cumulative impacts of individuals threats, and a need for better collaboration between scientists working in silos). Nevertheless, he is an optimist, concluding: “We’ve still got a lot of work to do but I think—I hope—there’s still time.”