Christopher Burns has lived and worked in Indonesia since 2002 and since 2018 has worked with the Bali Tourism Board. He currently leads their media-communications team for the western market. He also serves as the head of business development for Bali App, the official app for the island. Here, Burns responds to Bali's inclusion on Fodor's 2020 No List.

When surfers first made Bali popular in the early 1970s, the island was much like many other tropical destinations with pristine beaches and volcanic peaks. There was one unique difference though—it had the most extraordinary culture. Preserved for over a thousand years, this unique blend of Hindu, Buddhist, and Animist beliefs influenced every aspect of Balinese life.

As surfers spent their days in the sea riding perfect waves, the people of this island spent much of their time preparing for, celebrating, and cleaning up after elaborate ceremonies. Over hundreds of years, they had constructed some of the most intricate and aesthetically beautiful places of worship anywhere on earth. These exotic temples and the haunting mantras that echoed amidst their walls drew hordes of curious visitors eager to experience the ancient mysteries Bali offered.

The growth was staggering. By the early ‘80s, Bali was transformed to a resort island and its economy became almost solely dependent on tourism. Investors funneled money into huge resorts, beach clubs, adventure parks, and a host of entertainment venues. The infrastructure struggled under the load and solutions to the worst problems were put off until breaking point. Yet even as traffic, garbage, and power outages increased, the world’s love affair with Bali was undeterred. We won World’s Best Destination and Best Tropical Island of the Year more times than we can count. Like flies to a Bintang, the planeloads of tourists kept coming, and the cash they brought became an easy distraction to the growing issues that could one day undermine our success.

There is a tired old excuse often trotted out by well-meaning expats–the one about the previous generation who bought their food wrapped in banana leaves which they could then throw on the ground to become part of the earth. The suggestion is these people have not been able to break that habit in the age of plastic and we may have to wait several more generations for the lessons to be learned. This story has two contemptible implications: firstly, it suggests the people of developing countries can’t discern the difference between bananas and plastic; and secondly, garbage is a cultural tradition we need to accept. Educating the community is one of our greatest challenges but let’s not make excuses for complacency. 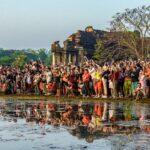 This island, with a population of just over four million, now receives more than eighteen million visitors a year. The strain on our environment and infrastructure can no longer be ignored and this has resulted in some bad press. But a few bad stories are easy to ignore as the news cycle marches on and they get lost in our collective amnesia.

But being added to a No List from a trusted travel publication such a Fodor’s drew the attention of the government and our stakeholders in a way I’ve not seen before. There was the typical rush from a few to dismiss the problems but I was surprised to hear the more amplified voices of those who welcomed the criticism and demanded: “this is the time for change.”

The new government was elected in 2018 on the promises they made to address Bali’s most challenging issues. And it seems they are committed to keeping their word.

In the meeting room of the Governor’s office in Denpasar, an impressive plan called Nangun Sat Kerthi Loka Bali, “Towards a New Era for Bali,” has been designed to protect Bali from the threat of over-tourism and create a ‘Green Island’ as an example to the world of sustainability. The challenge is huge but the results are already being felt. Last year we banned single-use plastic bags, Styrofoam, and plastic straws. The initial inconvenience soon passed and we’ve all now learned to tilt our glasses and allow gravity to perform the task of consuming liquids. And under the seat compartment of every motorbike now lives a reusable bag for those last-minute stop-offs at the minimart.

Separating our garbage and recycling is now gaining traction across the island. The famous ‘mountain of trash’ in Suwung which received 14,000 metric tons of trash a day, is being transformed into a parkland. Mass cleaning programs are happening now in our rivers and lakes. And Seawalker in Sanur is leading the way with an ambitious coral reef regeneration program. We’re also moving towards being paperless as we implement a new digital ecosystem called Bali App which will be the payment gateway for all ticketing across the island.

The efforts have been recognized by the Australian Consular General and the Bye Bye plastic campaign also made world-wide news.

Yet as with any great initiative, we need support. Our first obstacle is community awareness and compliance. In this area, we are far behind most of the world. Environmental education programs have started at schools to raise a new green generation of Balinese who can help influence the older generations still resistant to change. But even with that, how can four million residents offset the impact of eighteen million tourists? Especially when the average tourist uses five times more water and produces far more waste than any local.

The irony—tourism is the major source of our environmental problems yet it’s precisely the tourist dollars we need to address those problems.

So by taking an example from many other destinations around the world, we are introducing a ‘Green Contribution Fee.’ This $10 contribution from every foreign arrival will go towards environmental and sustainability initiatives. The feedback so far shows most people are happy to make the contribution if the money helps offset the impact of tourism on the environment. I guess it’s true…

“When you pay for something, it becomes precious”

We hope to implement this in the coming weeks and Bali Tourism Board has formed a Media Team to help communicate our environmental message and achievements to the global media.

So, it’s with much optimism we begin this new decade with our goal to show the world we are committed to our environmental responsibilities and will make every effort to preserve the natural beauty of Bali for many generations to come. And you will know we’ve succeeded when Bali does not appear in the No List for 2021.