Beaches Kaila Yu Do You Enjoy Visiting Hawaii? You Should Pay a Fee
Home  >  News • VIP Travel
All Photos Courtesy Of Meg Butler

Cathay Pacific has a reputation for excellence and attention to detail and they certainly strived to live up to it.

Hot take: I like a long flight. Like rayon, I travel well, especially when the service is good. And recently I got the chance to try out Cathay Pacific, an airline with the reputation of having not only the best service in the business but a young fleet, great premium cabins, and access to some of the best airport lounges in the world.

I took a ride on my longest haul to date: 16 hours from Hong Kong to Los Angeles. 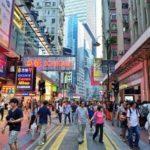 RELATED STORY
15 Things Not to Do in Hong Kong

My good-travel barometer? My two-year-old copy of Anna Karenina. If I manage to crack it open, I’m not really enjoying myself. So I took my tome on a journey to see if Cathay Pacific’s Business class offerings live up to the hype, or if I’ll finally get to see what one of literature’s longest love stories is actually about.

Even though I suffer from what a doctor once called “serious” jet lag, I’m always optimistic about hitting my destination running. So, when I can, I choose a red-eye. This flight was scheduled to arrive at Hong Kong International Airport at 6:10 a.m. and leave LAX at 11:20 p.m. on a Saturday, a time when the Tom Bradley International Terminal is relatively and appreciatively un-crowded.

The business class line for the TSA was only a few passengers long and the agent surprisingly cheerful (even as he flagged my bag and had me throw away a brand-new 6.8oz. bottle of Chanel No. 5 lotion that had somehow made its way in there).

Despite that hiccup, I made it from my rideshare to the other side of security in roughly 10 minutes, which may have been a personal LAX best.

Tolstoy Status: Not in line long enough to read and queue.

With nearly two hours of pre-flight time to burn, I headed up to the fifth level of the terminal to the Oneworld Business Class Lounge. While Cathay Pacific does have its own lounges in Hong Kong (more on those later), this one is open to all Oneworld passengers, including Qantas which, judging by the accents in the room, there were plenty of. 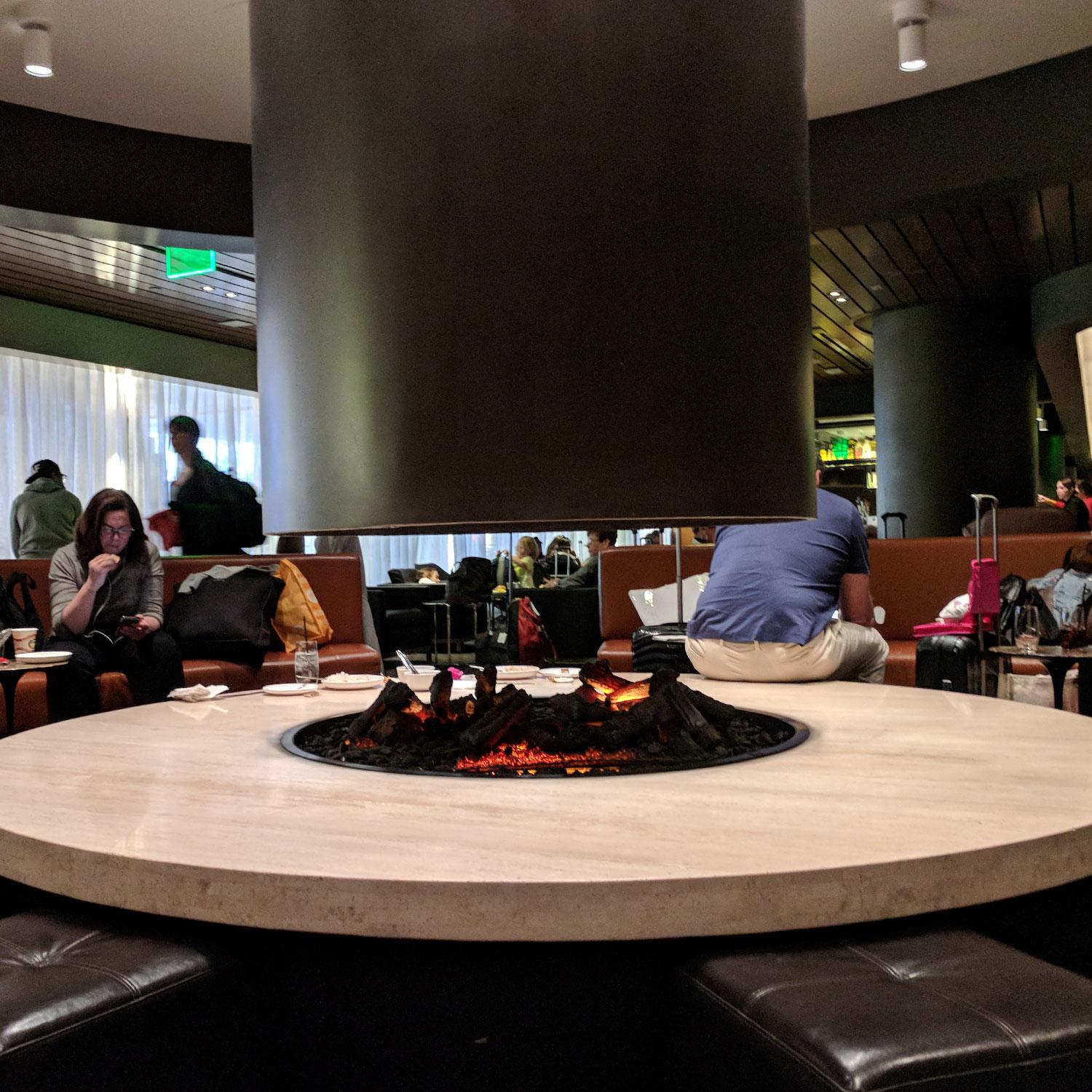 To accommodate all of those airlines, the Oneworld Business Class lounge is massive. It holds up to 400 passengers, or so I’ve Googled, in three wings, with a surplus of seating options. I wandered them all looking for a good place to plug in my Pixel, laptop, and DSLR which are always with me and always in need of a little juice.

I settled on one of the leather loungers in the main room, near the big (if faux) fireplace, some of the most comfortable and plugged-in seats in the house. The rest of lounge, I have to say, didn’t hold up so well in terms of amps. Outlets, in general, were few and far between, and all North American, so I hope the Aussies brought their adapters.

But that was the only attention to detail that the lounge seems to have missed. The showers are pristine (and cleaned after every use), the bathrooms are appointed with orchids, the business center sports around eight Mac computers, and there are even loungers by the window just for watching planes go by.

The dining, of course, is where airport lounges really set themselves apart. And the Oneworld Business Class lounge not only has a real bar (well-appointed with mid-range selections) and a wine bar (self-serve), but also a hot bar, a cold bar, and even a taco bar (closed by the time I got there). A crowd gathered just north of the espresso machine. They were centered around something the concierge called “the Mercedes-Benz of pancake machines.” Press its button and you can watch through the tiny window as it “3D-prints” a pancake—perfectly sized to cook by the time it reached the end of the conveyor belt. It makes a stack of three in about as many minutes and almost everyone in the lounge had a small syrupy plate next to them.

It’s the little things that make a lounge worth it.

Tolstoy Status: My hands were, frankly, too busy for a book. Instead, I plugged in Vince Staples’ Big Fish Theory and people-watched between visits to the food and self-service wine bars until it was time for my flight. 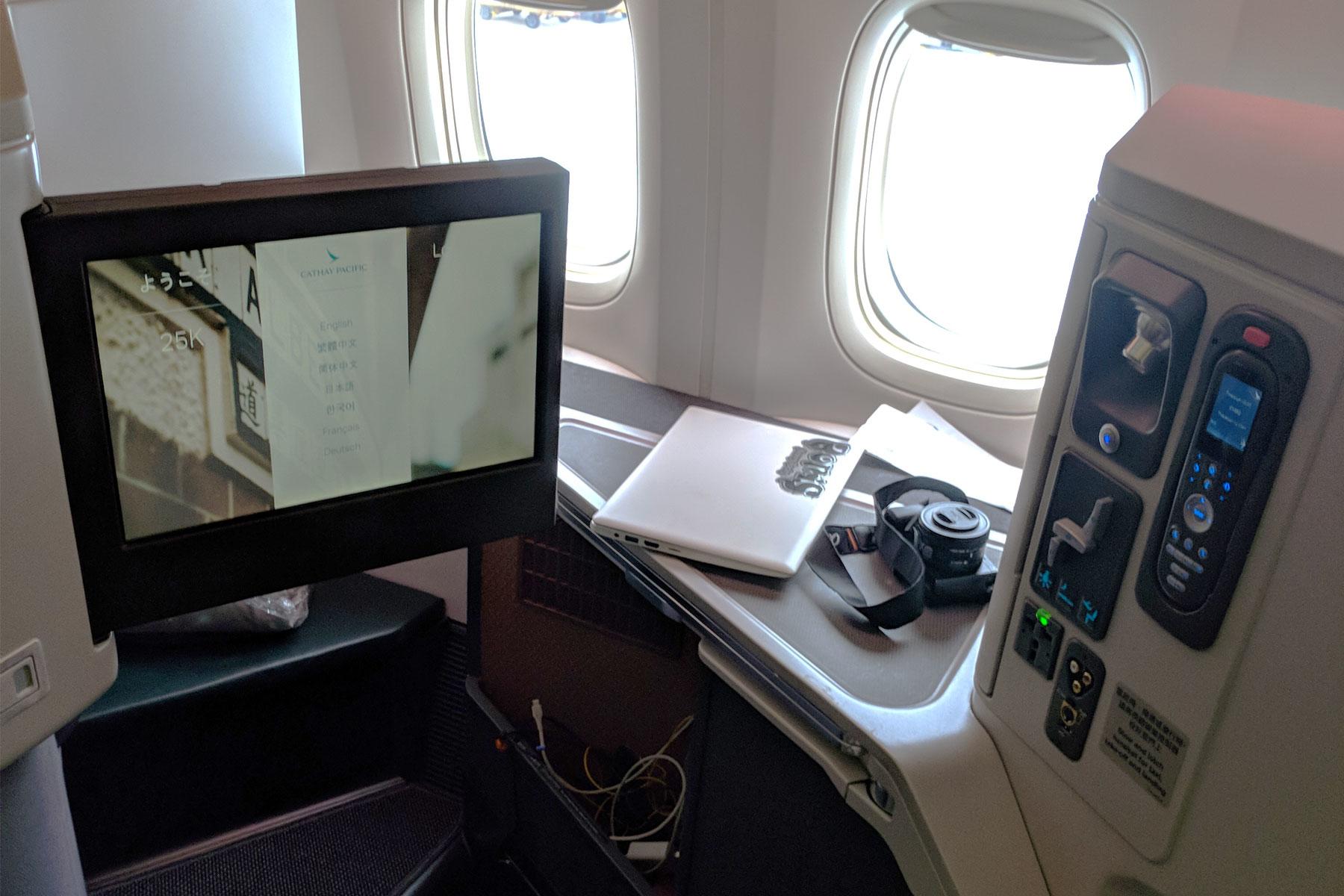 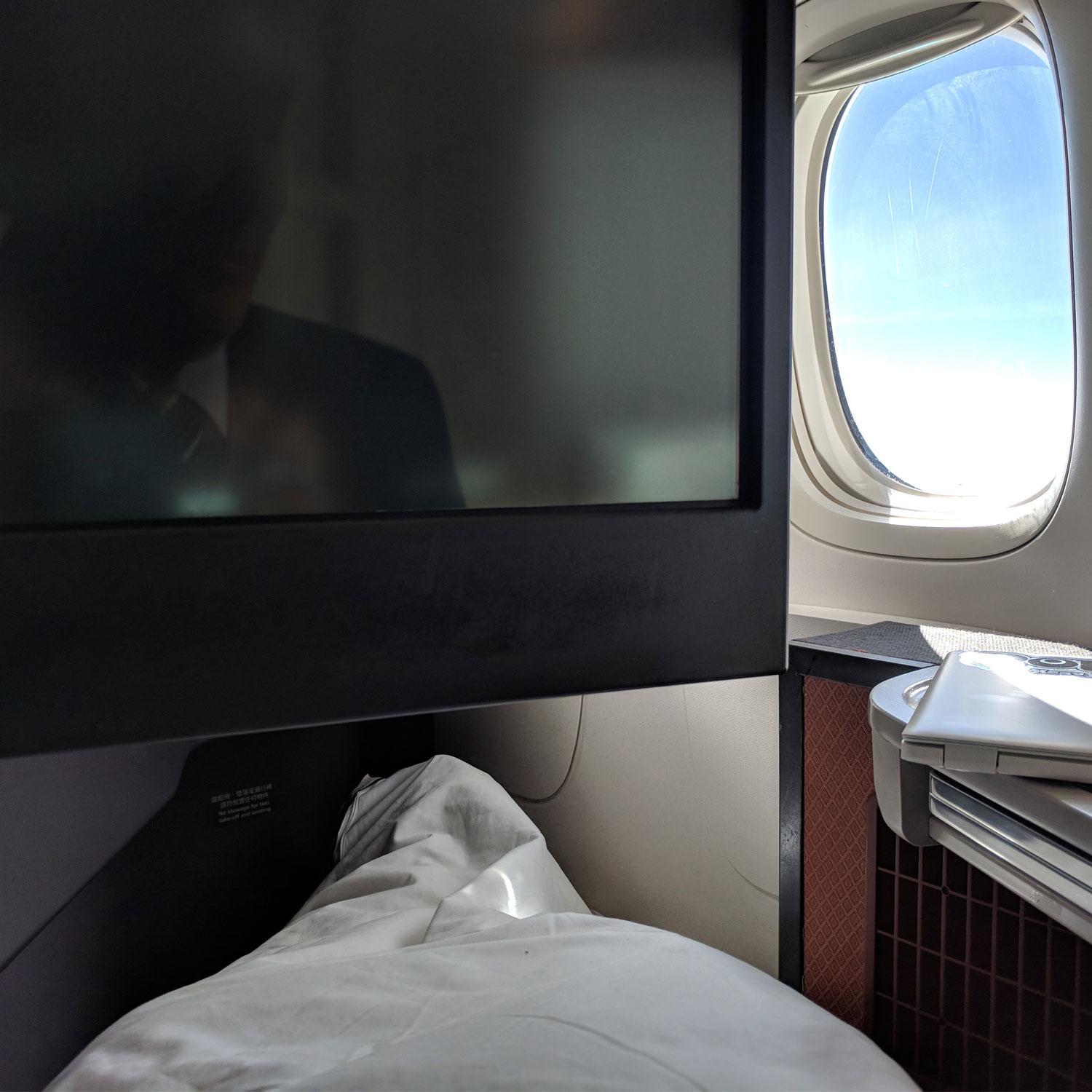 It seems like Cathay Pacific is always refreshing its business class suite. And while the headlines have started including “again” in semi-sarcastic parentheses, you can tell that Cathay Pacific takes keeping it fresh seriously when you board. Their business class section is pristine. And the 38 reverse-herringbone seats in 1-2-1 configuration means that everyone has aisle access, which is an attention to detail that I don’t think gets enough credit.

I was lucky enough to be seated in the bulkhead window seat 25K. The window seats are closest to a private cabin feel. The configuration of the pod makes making eye contact with your neighbor an intentional act that requires leaning forward, and even though your belongings do technically share a middle tray, a small divider makes sure they stick to their own sides.

And, anyway, there is plenty of storage in the side cubby for your purse, 864-page copy of Anna Karenina and Pixel, laptop and DSLR if there are only two charging points—a USB and a (universal) outlet. But the flight is long enough for everything to take turns juicing up. And, because there is no Wi-Fi on this flight, it’s more difficult to find yourself involved in any serious battery-draining activity.

One of the best activities on any long-haul flight is sleeping. There are few in-flight experiences quite as nice as reclining back incrementally until you’re finally lying flat in your own business class bed. It stands to mention for those who will miss it, while Cathay does provide duvets, these lie-flat seats do not come with bedding or a mattress pad (or turn down service or pajamas, while we’re on the subject). 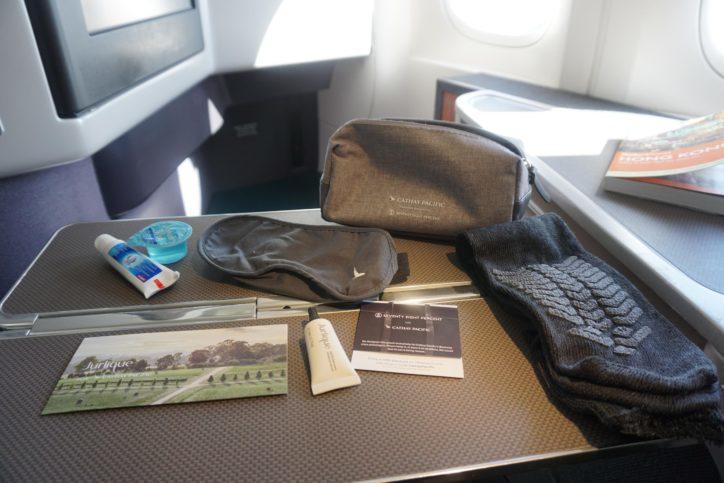 While the kit itself did get an update to a more stylish (and reusable) bag, the contents don’t have the bells and whistles that you’ll find in First Class (those bags are also gender-specific).  What’s in there are basics—lip balm (by Jurlique), toothpaste/brush/mouthwash, eye mask socks, earplugs—they are above par in quality. 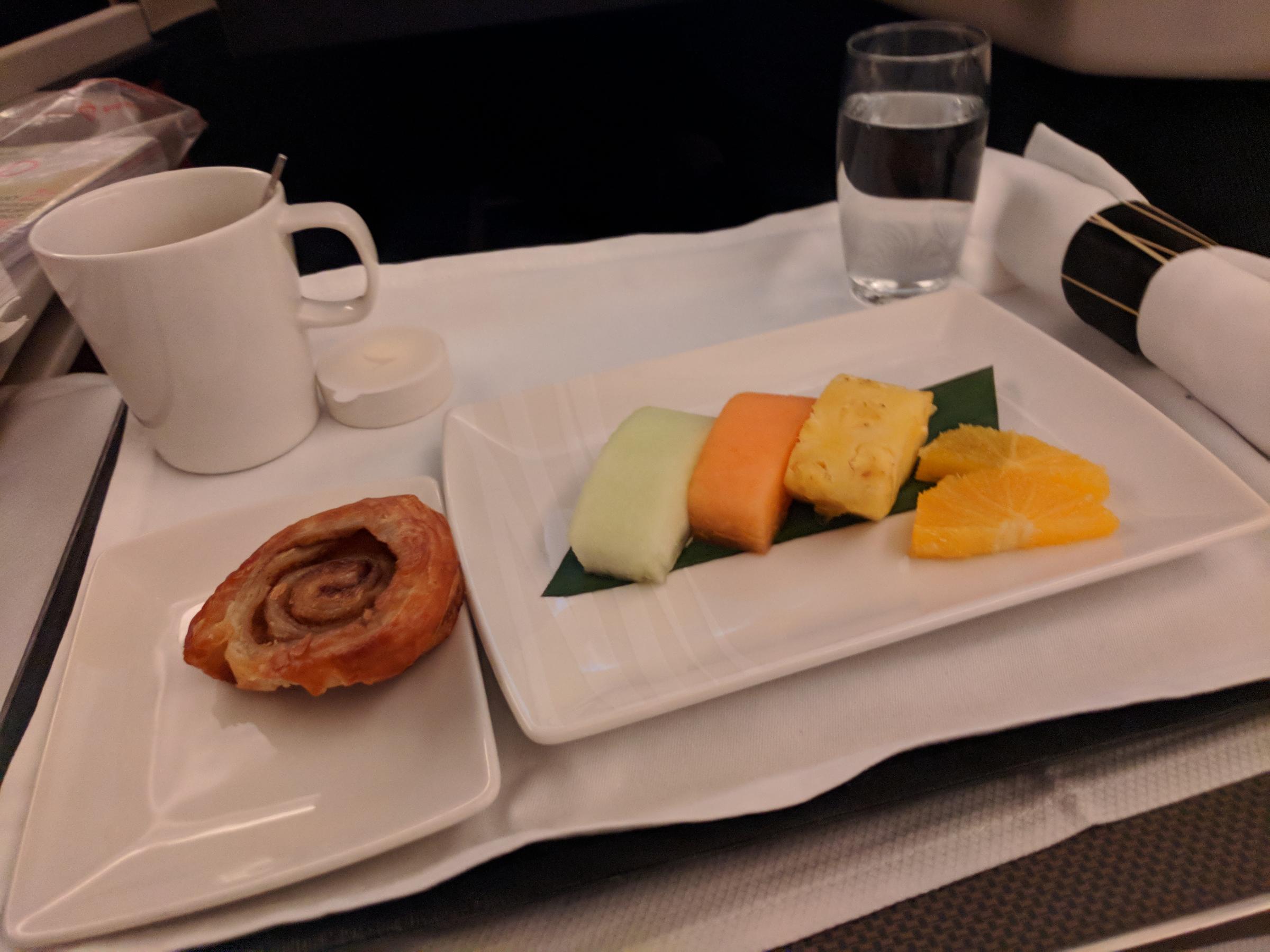 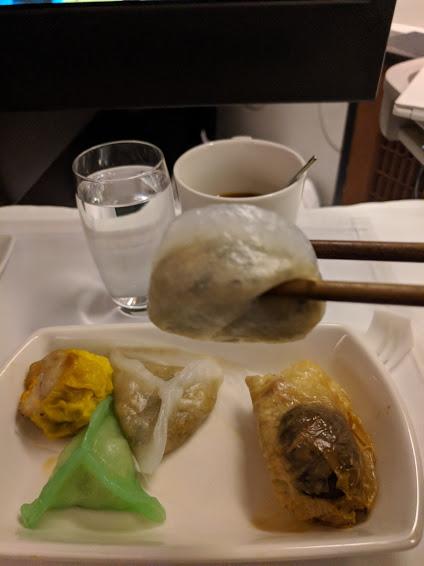 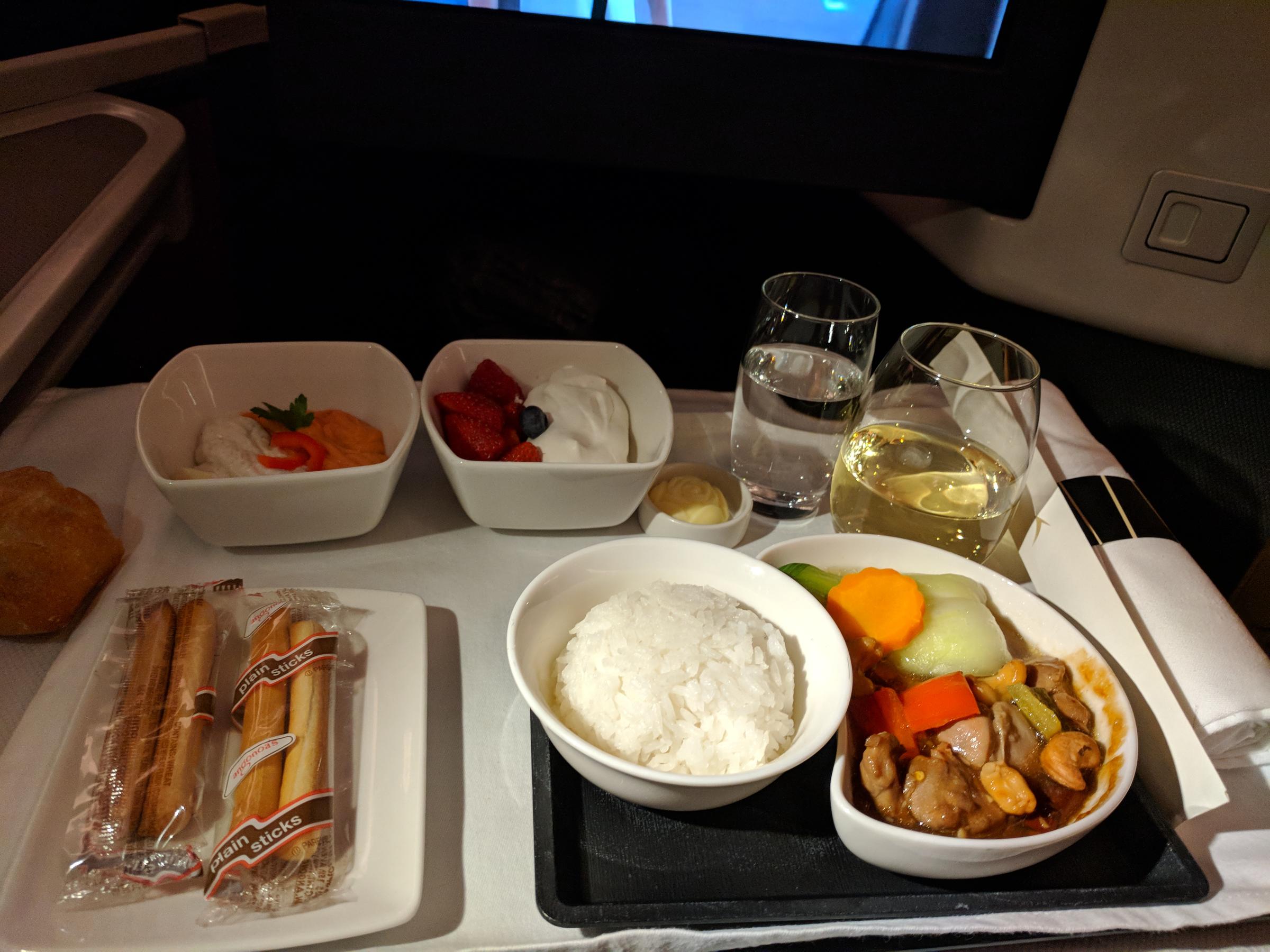 As is their reputation, Cathay Pacific doesn’t skimp on service. My flight began with champagne and white wine. Cathay’s signature drink, “The Cloud Nine” (vodka, Cointreau, and Sprite) was offered but that liqueur of choice disagrees with me. The flight attendant was happy to bring me more champagne.

Food service was prompt and efficient and if you’re waiting to hear whether or not it came by on a cart then you too have heard the rumors that Cathay Pacific has been testing out more personalized service where they hand-deliver each meal to your seat. I’m here to report that it wasn’t available on my flight yet so I assume that the upgrade is still on its way.

I happen to like the way Cathay brings food options out on the cart so you can see the Cantonese and the Western choice before you make your decision. When I read the (eight-page) menu, my heart was set on the beef fillet, but the Jung Po chicken was love at first sight. All of the food was good—amazing “for airplane food”—but it didn’t quite manage to transcend the category.

My in-flight breakfast consisted of fruit and a pastry followed by a choice between cereal and yogurt or an omelet as well as a selection of dim sum. I love Cathay’s multi-course presentation, but I always overdo it and I didn’t leave any room for “hot snacks” (on this flight, a bacon cheeseburger, shrimp wonton soup, and Haagen Daz ice cream).

Can we all have a moment to be grateful for noise-canceling headphones? This is an airline that prides itself on attention to detail, and this addition makes popping on headphones transport you off the flight. The absence of that background airplane noise turns your seat into a private space, a door that closes on your room until you pop your earmuffs off to ask for champagne. 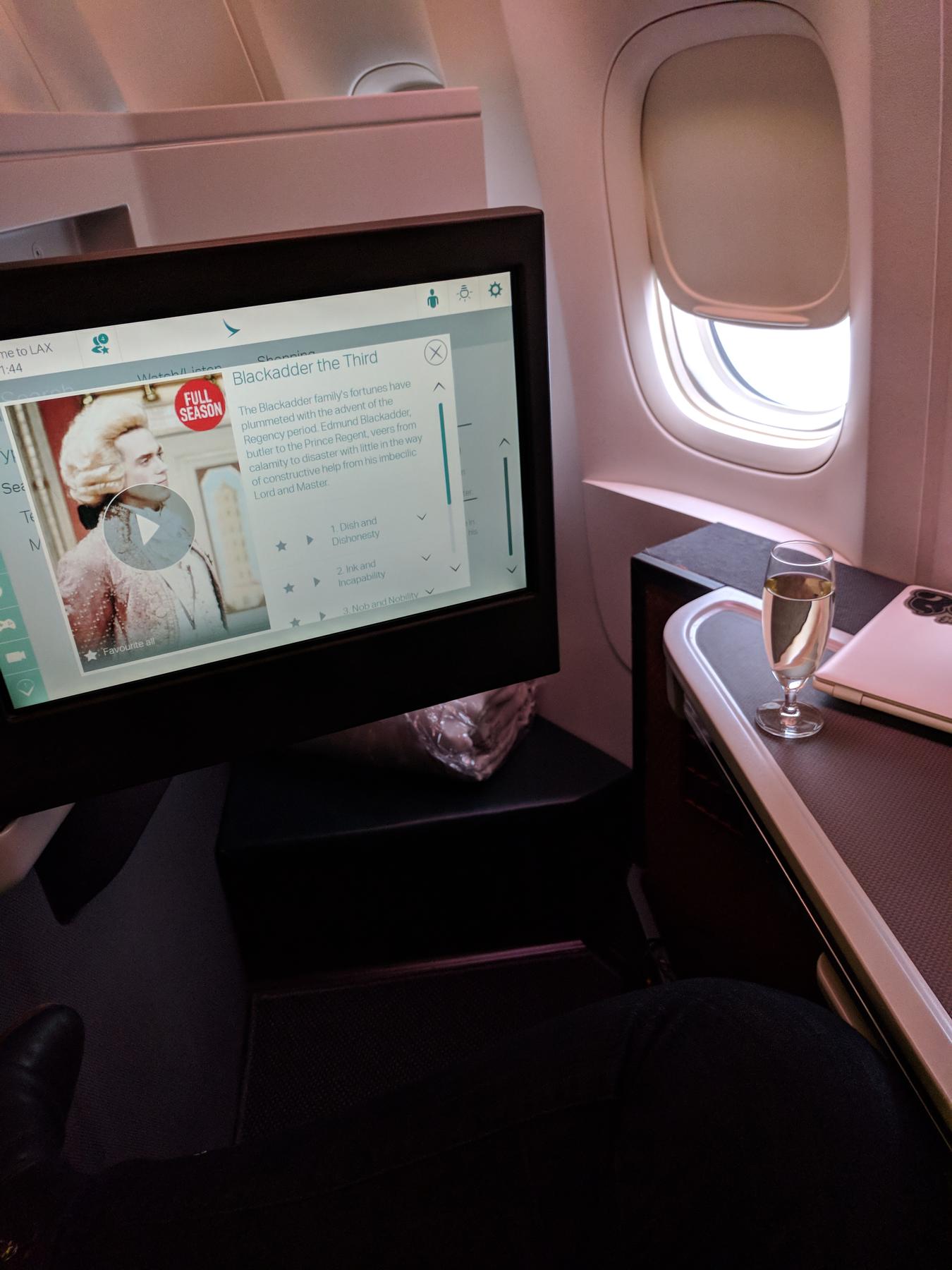 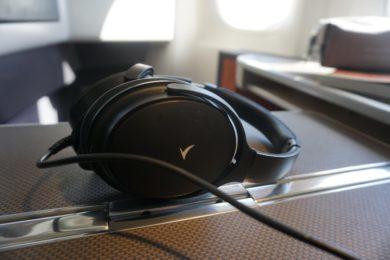 The entertainment selection isn’t bad either. The choices are vast although the touch screens could be slightly more responsive. But with more and more airlines phasing this perk out altogether, I feel hesitant to complain lest I further anger the in-flight entertainment Gods.

Tolstoy Status: During my 16-hour flight I ate well, drank even better, and managed to watch The Kingsman (Julianne Moore was delightful), Passengers (just, generally, a mistake) and Mrs. K, a Hong Kong drama about a middle-aged housewife who turns out to be a surprisingly violent assassin. I did not get close enough to reading Anna Karenina to even pull it out of the cubby. A+

On my way back home, I was lucky enough to visit two lounges in an airport where Cathay Pacific has many. There’s The Bridge, The Wing, The Pier, The Arrival, and The Cabin, although the latter is scheduled to close on April 30, 2018. In its place, Cathay Pacific is opening a new Deck lounge, which was not yet open when I flew through. 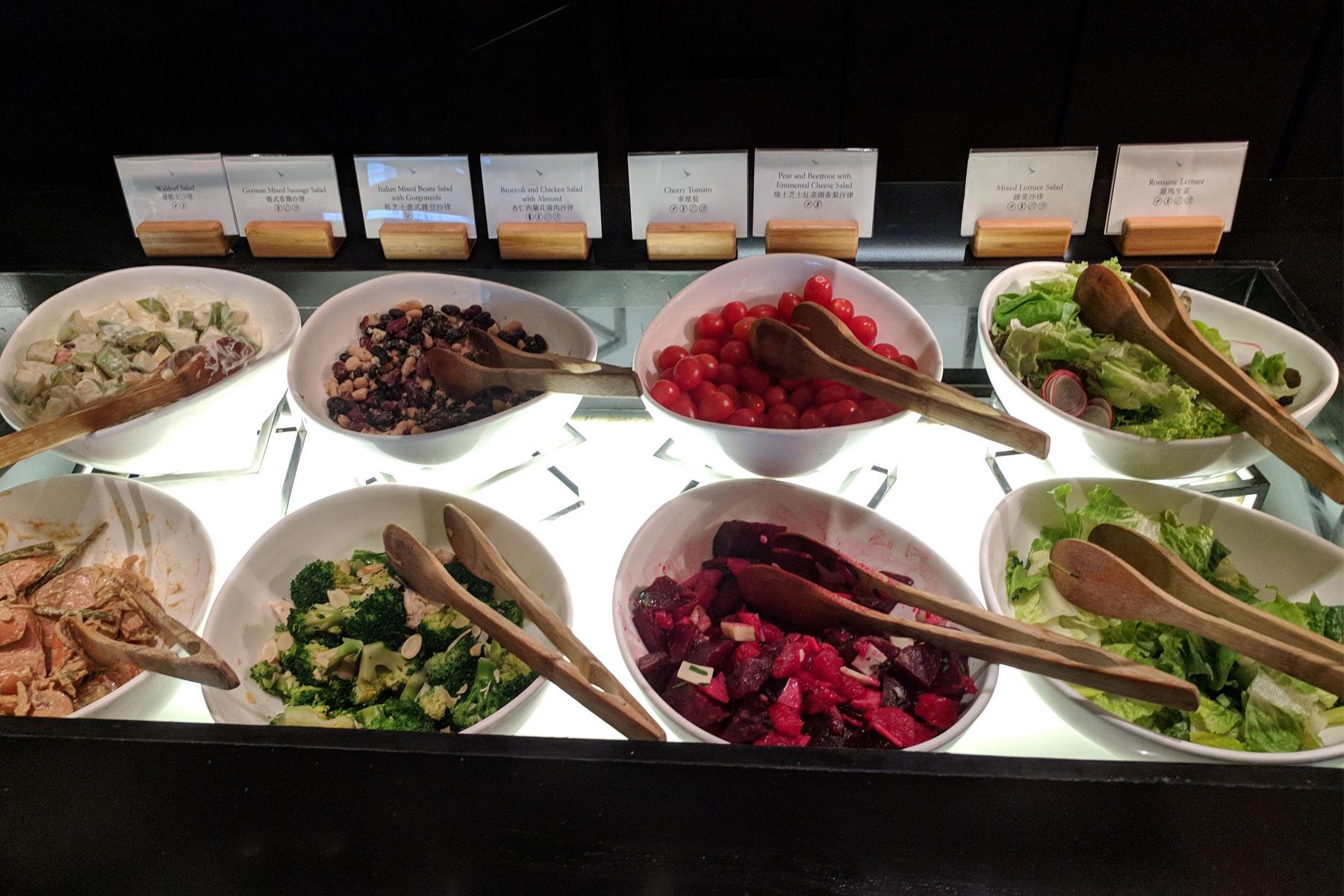 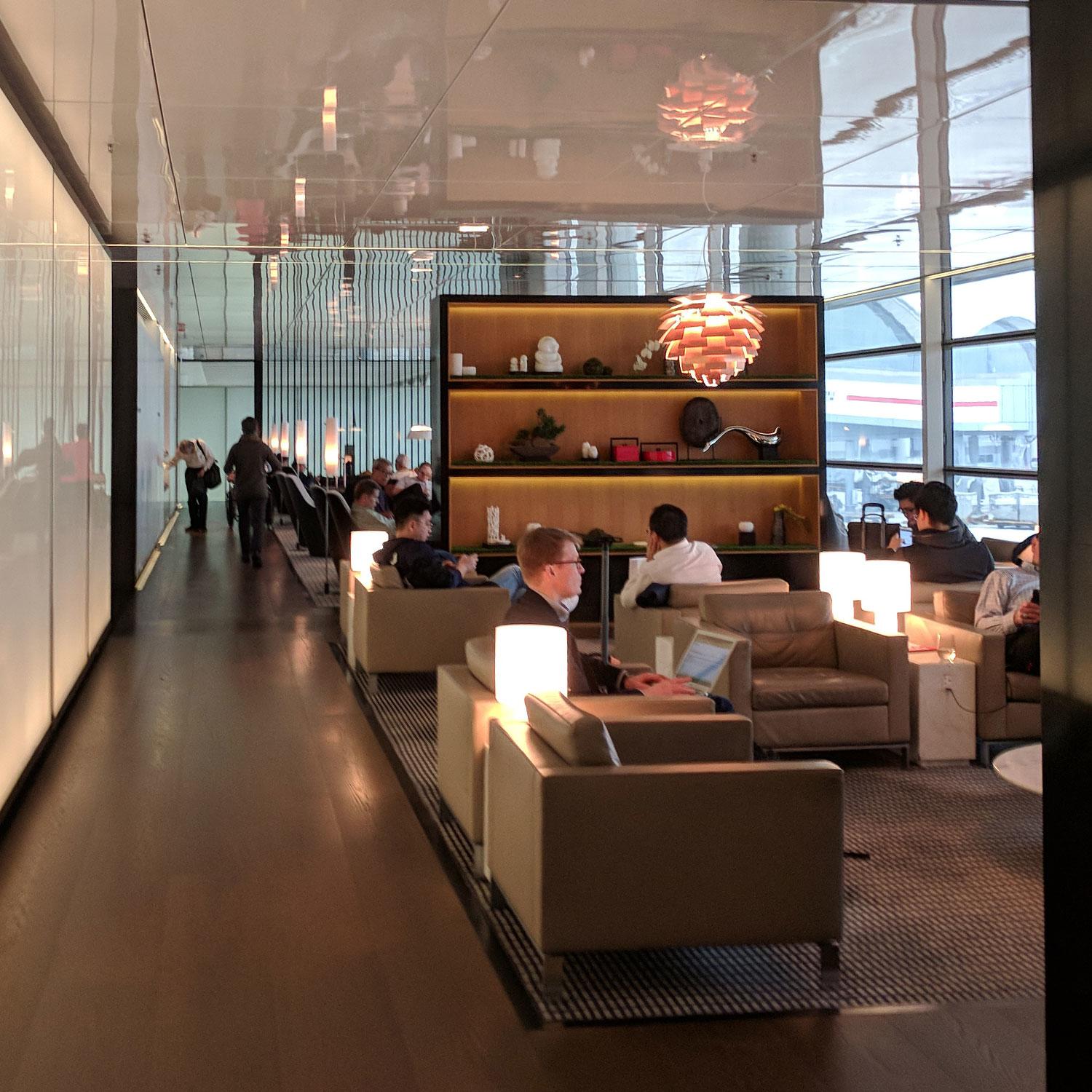 After a long trip abroad, The Bridge feels like a homey living room (albeit one in an atrium with views right down to the airport curtain below), and you can watch planes load and unload in comfortable Eames-style loungers.

The snacks here also aspire to give as many people a taste of home as possible. There were not only mini cocktail buns but also vegetable samosas, spring rolls, and for dual Mexican-Italian citizens, taco meat pizza. For more substantial offerings, visit the sandwich bar and bakery, The Bistro. I didn’t, however, have time to eat because I had to make room for a visit to Cathay’s most famous lounge: The Wing. If The Bridge is a living room, The Wing is the lobby of a  white shoe firm. The atmosphere is sleek, minimal, and haute but never short on comforts. The bartenders are adept and the alcohol is not only top-shelf, but accompanied by a champagne bar.

The shower rooms are expansive and the lounge seats are large, like miniature business class pods with trays for food or work and, yes, plenty of outlets. As you take the all-black, private elevator back down to the ground floor, you definitely leave with the (correct) impression that this is one of the most impressive airport lounges in the world.

Tolstoy Status: I did manage to have enough time to pull out my copy while waiting for the bartender to bring me my second Old Fashioned, but sitting there with my tattered dog-eared copy frankly felt a little gauche. I took out my phone and shopped a Bergdorf’s sale instead.

Cathay Pacific has a reputation for excellence and attention to detail and they certainly strived to live up to it. Everything was up to par; my complaints were minor and my copy of Anna Karenina has never been further from being read.