News Apeksha Bhateja Europe's Airports Are Chaos This Summer. And Now There's Another Problem
All Photos Courtesy Of Kanika Gupta

Kabul’s oldest neighborhood is replete with history and heritage.

Snaking through its manic traffic and unsightly buildings standing there like rude stamps of a Russian invasion, I arrived at the gates of Murad Khane, Kabul’s old city, only to be turned away.

Traveling to Afghanistan was perhaps one of my most impulsive decisions. I did not know what to expect from this war-torn country. I refused to Google it because I didn’t want to read anything that might give me cold feet. But Afghanistan is rarely ever out of the news and a week before I was to leave, a suicide bomber attacked a Hazara wedding, claiming 63 innocent lives.

Armed with my parents’ dos and don’ts, I left for Kabul with a palpitating heart pulsating with excitement. But to my dismay, the arid city looked dull and uninviting, as if telling visitors to go back while they still can. As I exited the airport, I looked out the car’s window like a child. I was somewhat disappointed to see that the buildings looked plain, oddly plain, uninteresting to the point of being nondescript. They left no impression on my mind and did very little to attract my attention. Barbed wire and spools of concertina coils served as a rude reminder that I was entering an active war zone. Years of war, invasion, and political deception have robbed the Afghan capital of its former glory and replaced it with Russian structures built more for functionality than aesthetics. 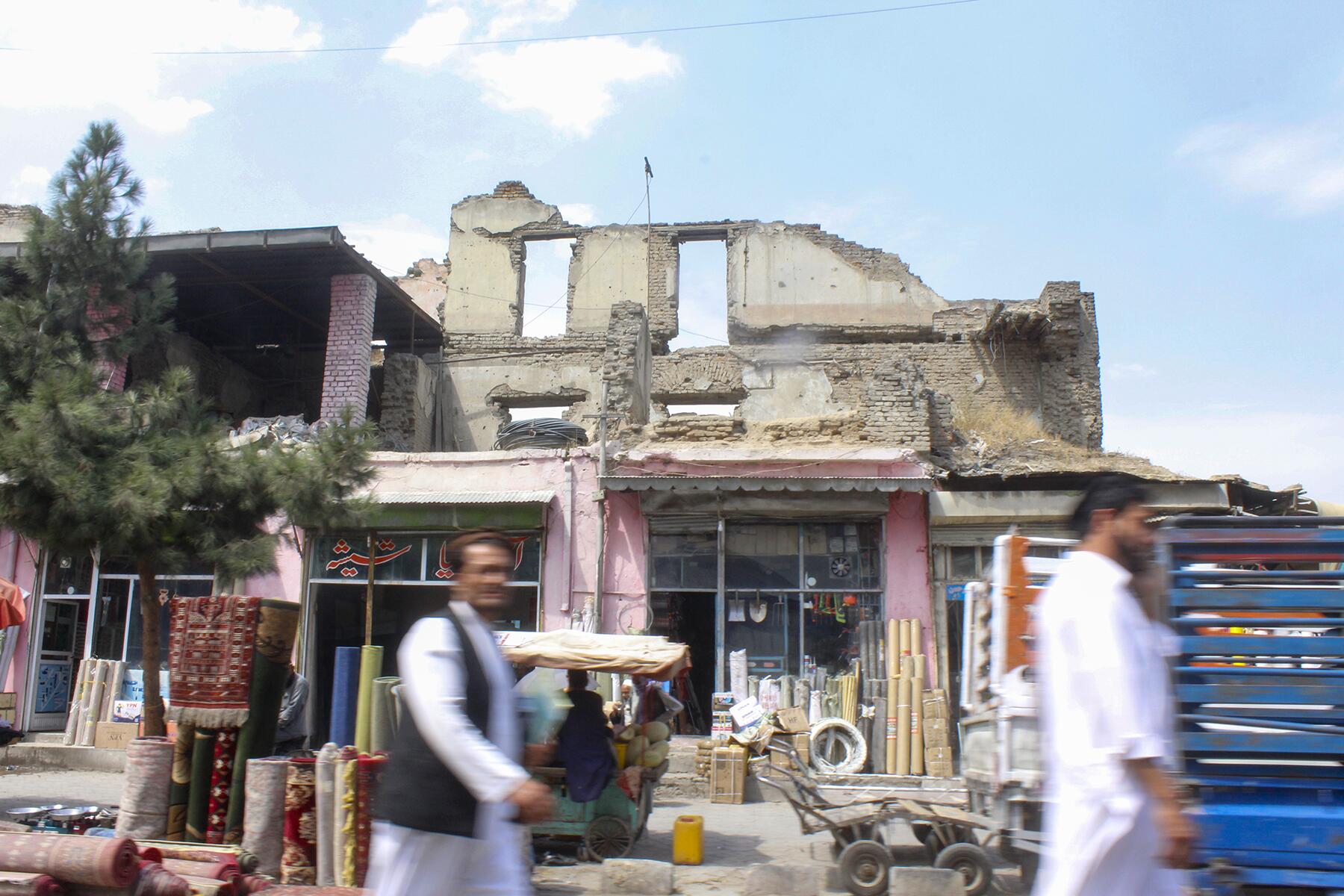 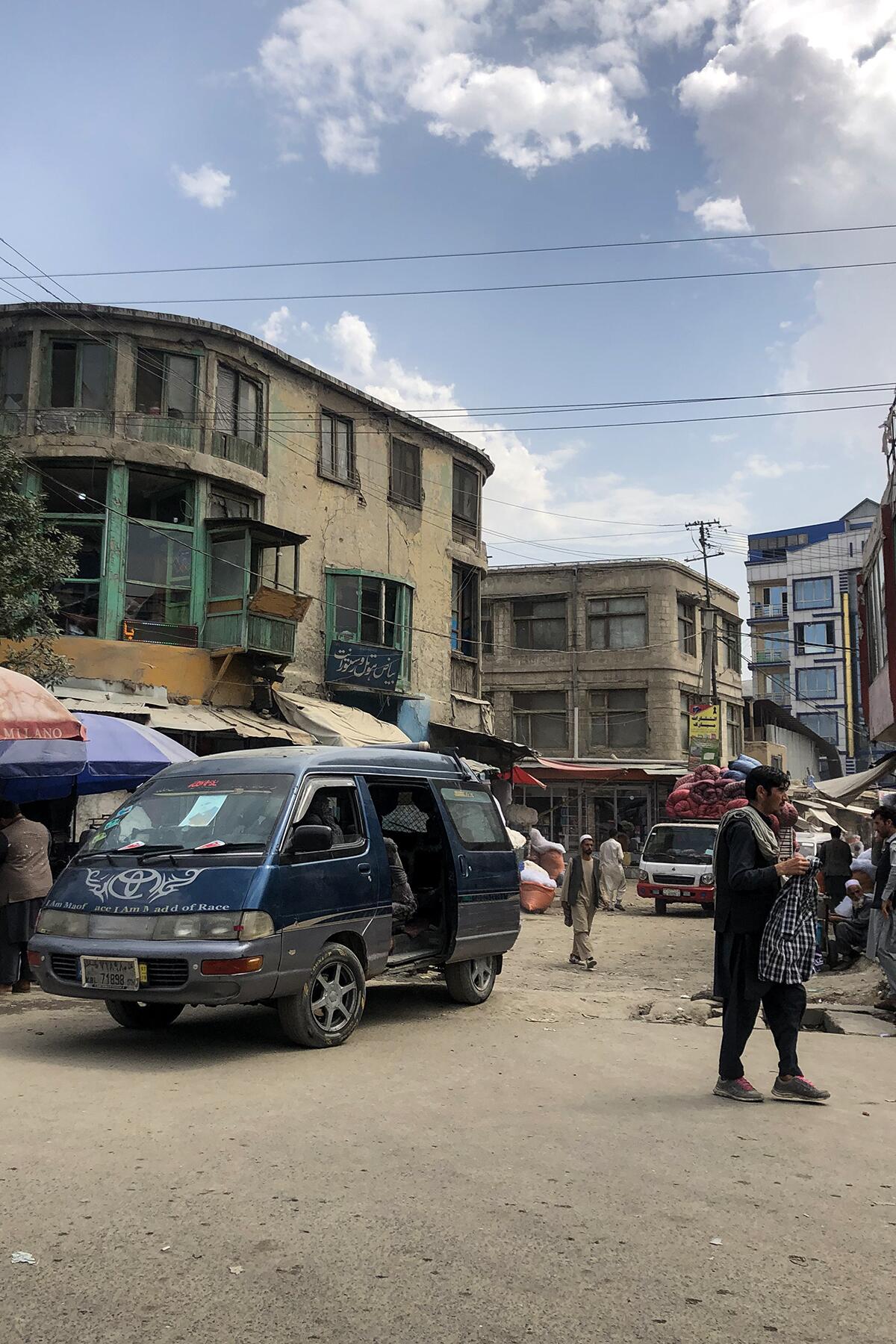 But not all is lost in Kabul. Ringed by the Hindu Kush on all sides, the city has plenty to offer if you know where to look. Its charming people and warm hospitality gave me the confidence to look beyond what meets the eye. So, I turned my attention to its oldest neighborhood—Murad Khane.

The Murad Khane district is located in the heart of Kabul, replete with history and heritage. Its pale mud housing alongside Kabul River is reminiscent of a culture that thrived through these very streets. Today, it’s one of the poorest districts in the capital.

Just across the road from the sky-high Soviet-era buildings lay an 18th-century quarter that hides a bustling market, narrow streets, and alleys full of vegetable and fruit sellers. Rising above the din of the noisy street, one can hear the tinkering sound of metal and the soft humming of caged songbirds. 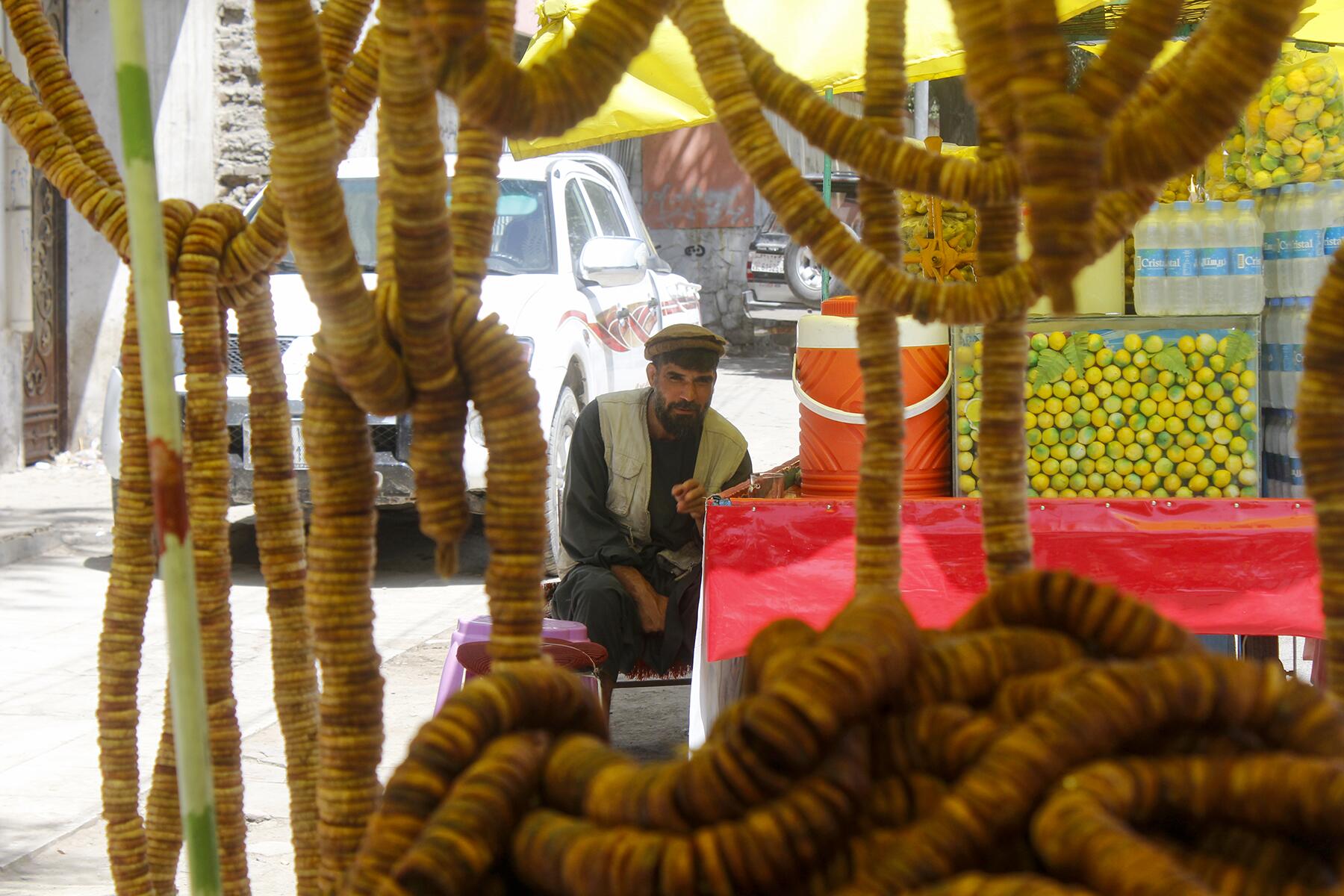 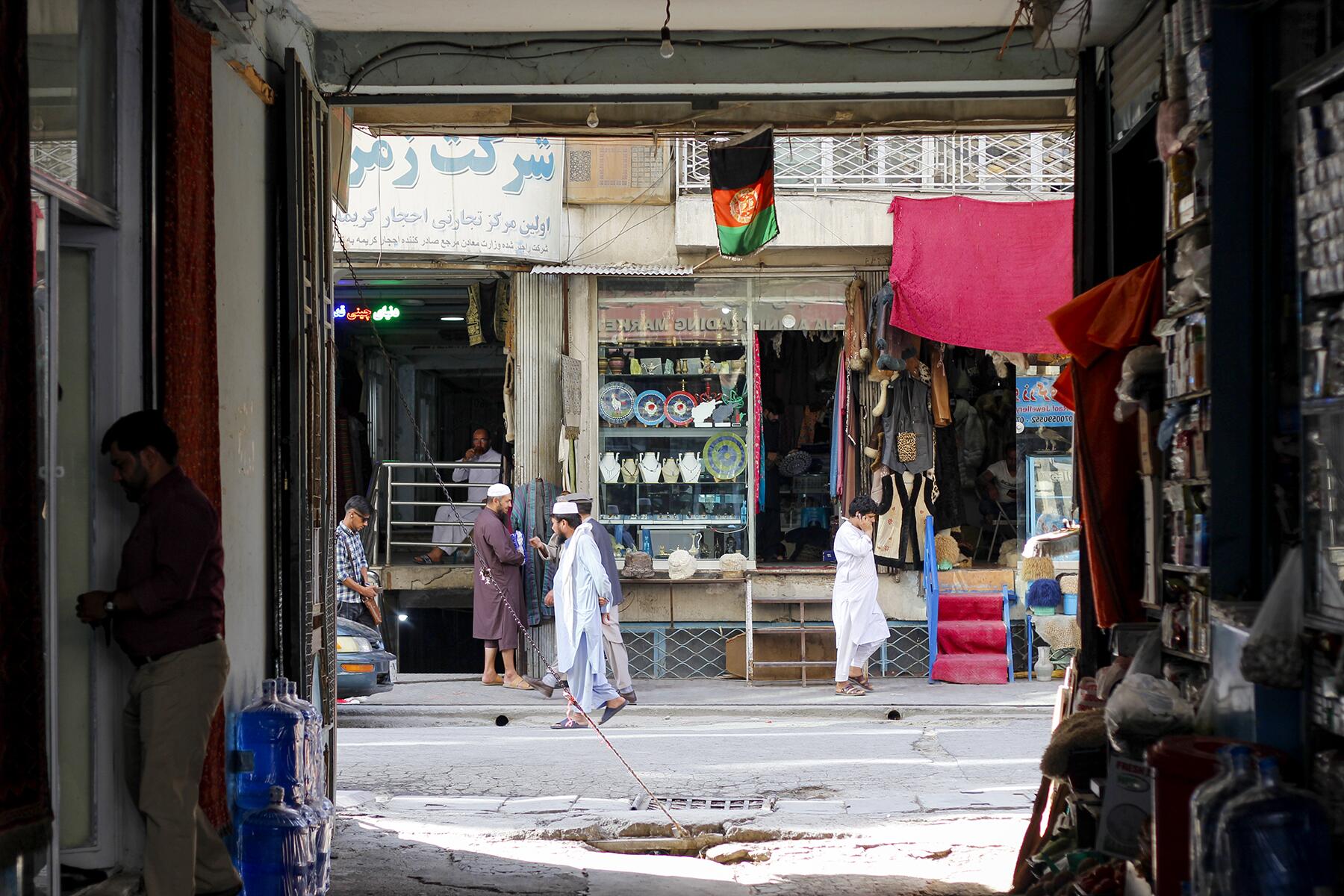 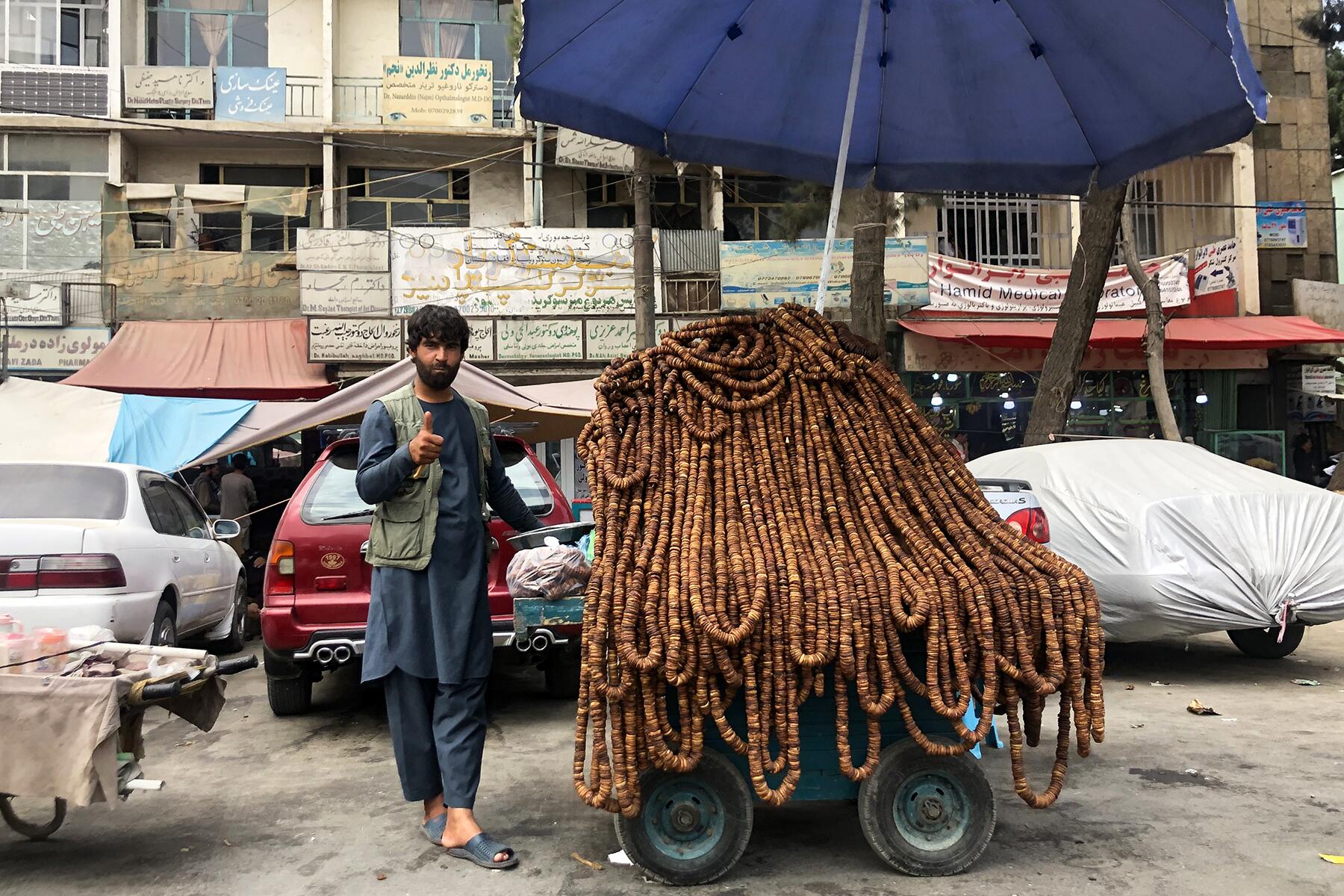 Back in the day, Murad Khane was a thriving Shia settlement. But today, the district is perhaps the last few places where the Afghan culture from its days of yore still exists, albeit in hiding. Over the years, the relentless persecution of minorities, like Shias, Hazaras, and Uzbeks, has made this historic quarter a ticking time bomb.

When I arrived at the gates of Murad Khane, I was surprised to see three to four burly guards maintaining tight security, allowing only a handful of people inside. The security here was especially stringent on that day due to a local Shia event at the mosque and a precautionary measure following the suicide attack that happened a couple of days prior. 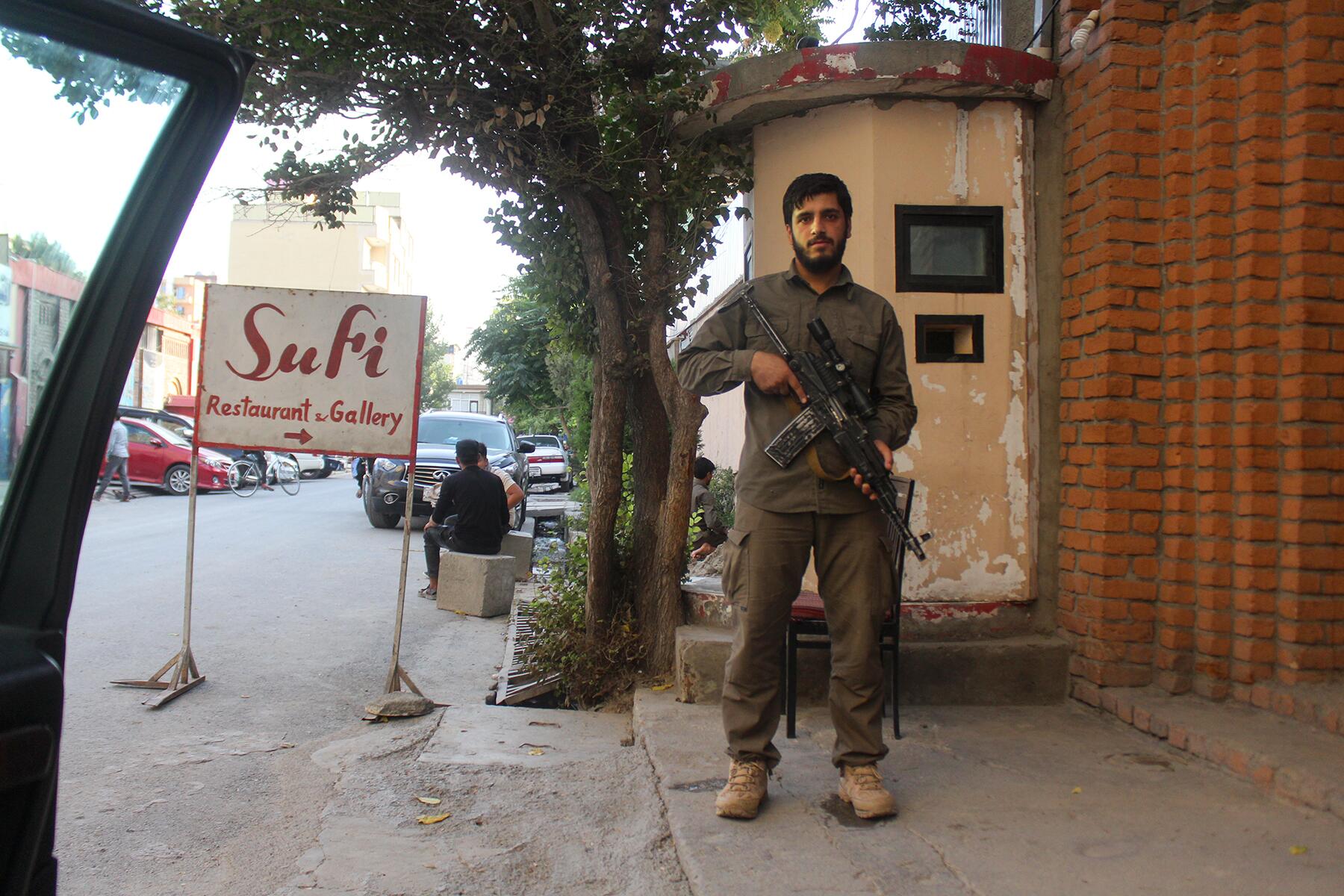 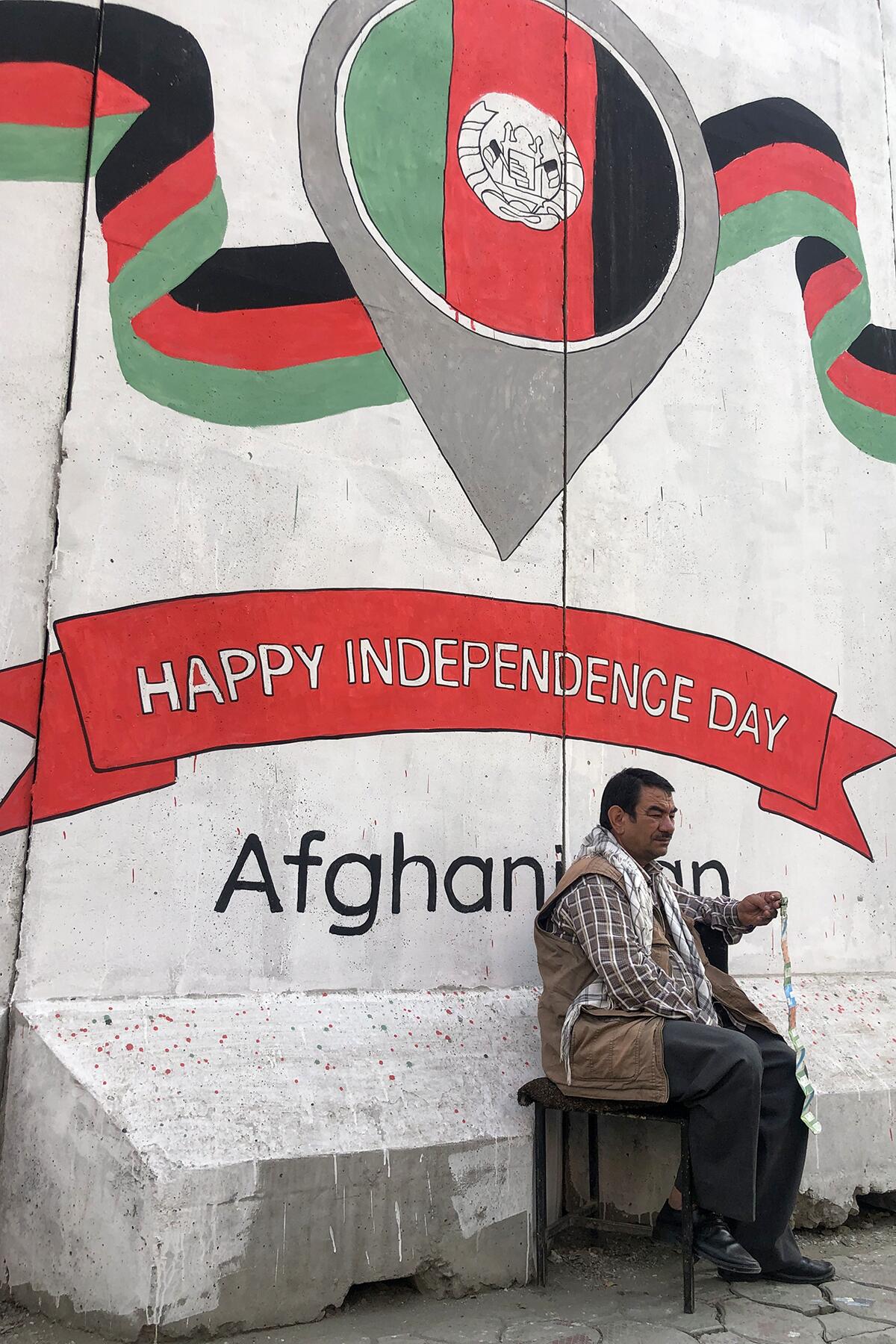 I entered the women’s line surreptitiously, covering myself up to avoid unnecessary attention. The locals accompanying me joined the queue for men. As I waited for my turn to be frisked, a woman behind me gave me her warmest smile. She asked me in broken Urdu, “Pakistani?” I smiled and corrected her that I am an Indian. Her smile turned into a grin. She curiously began asking me questions. Before I could answer any of them, it was my turn to be checked for weapons and suicide vests. I was still talking to her when I opened my bag for checking, and in that instant, all hell broke loose.

A crowd gathered around me, and the security guards rushed to the site of commotion…In Afghanistan, a situation such as this one can quickly become a matter of life and death.

She shrieked in horror as she looked inside my bag. This woman who was smiling and talking to me just seconds ago was now hurling abuses at me in Pashto or Dari, her face contorted in anger. I froze. A crowd gathered around me, and the security guards rushed to the site of commotion.

In Afghanistan, a situation such as this one can quickly become a matter of life and death. I started looking around in panic for my companions. But they could not come where I was standing because it was the women’s section. Everyone at this point had gathered around me, and the gun-toting guards were angrily pointing at me and saying something that I did not understand. It was complete chaos and all within a matter of minutes.

Then I heard someone yell in the background “camera Nahi, camera Nahi!” (“No camera!”) Luckily by that time, the locals with me had somehow managed to pacify the guards by telling them that I was a journalist and that the equipment in my bag is just a camera. They asked me to dismantle it and show it to them. I did as I was told, my hands trembling with fear. The guards finally let me go, only when we agreed to turn back.

I was shaken after this experience. More confused than scared. I looked at my companions, asking for answers. They told me that the big camera freaked them out, and it was those people who asked the guards to not let us in.

As far as I was concerned, I unknowingly nixed my only chance to see the oldest district of Kabul. I was still delirious from this episode when one of the guys with us found an unmanned and unlocked backdoor. He asked us to follow him. Within seconds, charged with renewed excitement, I forgot all about the incident and followed him inside.

I was mesmerized to see the mud houses exuding golden exuberance under the August sun. But before being restored to their former glory, the mud huts in Murad Khane had suffered their fair share of damage and neglect for many years until a British NGO, Turquoise Mountain, took it under its wings and rebuilt it.

I wanted to lose myself in those muddy lanes dazed with dusty air. I sneaked into a bylane that led to the street where all the madness had happened. I was stopped just in time, lest we get caught. 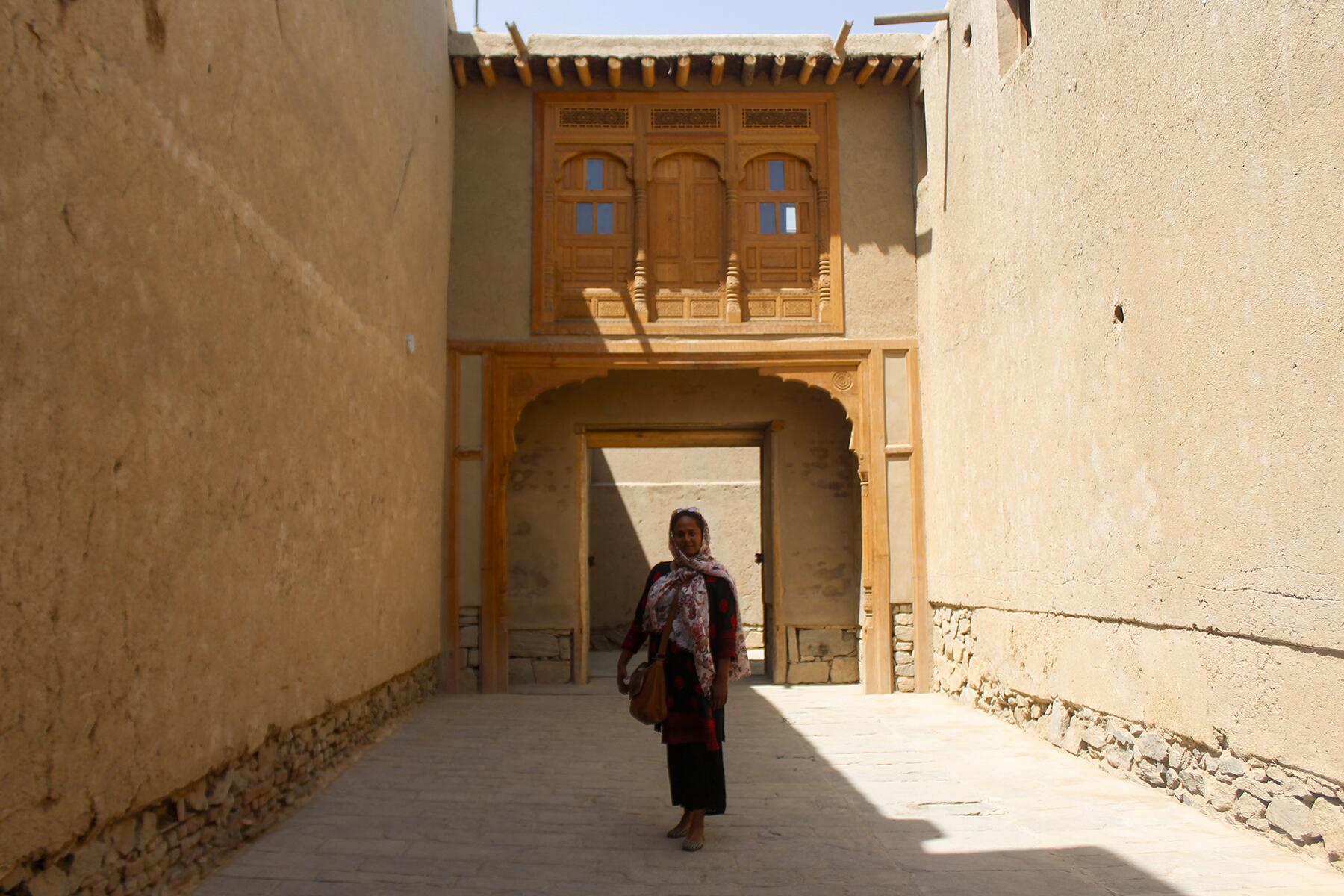 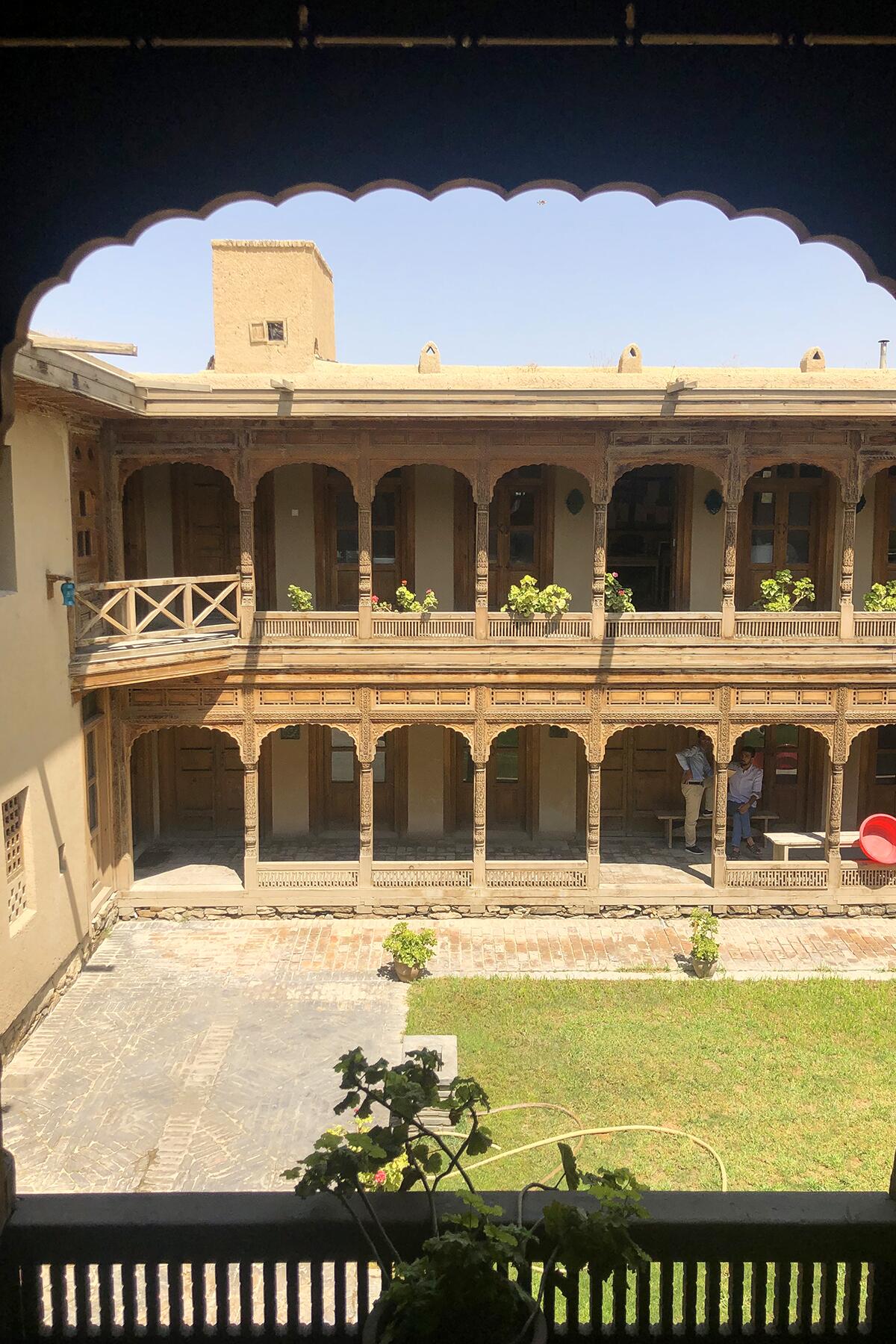 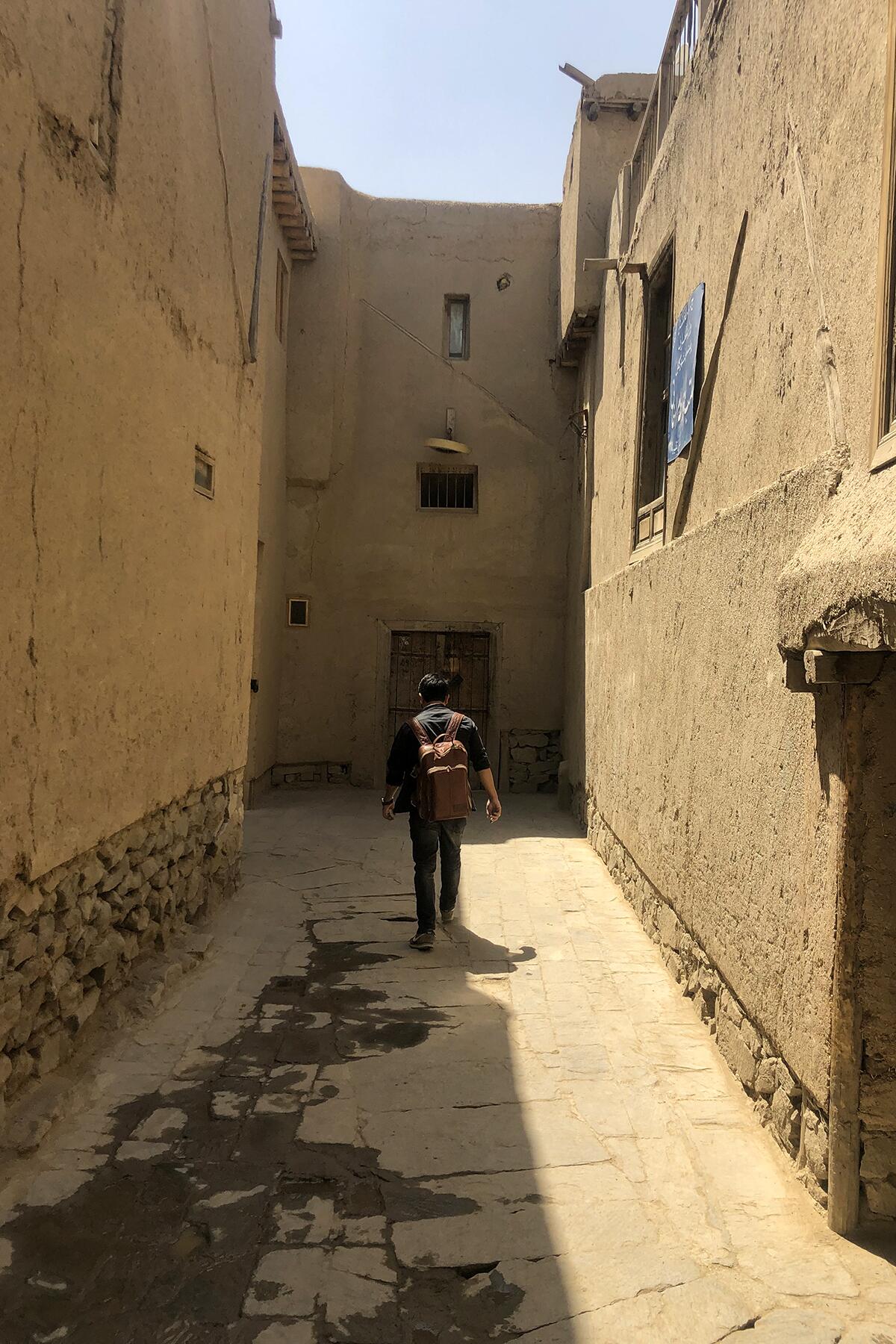 Soon, we entered a huge complex protected with at least five heavy iron doors. As we crossed one checkpoint after another, we entered what was a Sarai from the 1700s, a resting place for tired travelers along the Silk Route. What used to be a garbage dump and a decaying area has since been transformed into an emerging center of ancient Afghan art. The place is now brimming with artists, sounds of clanking metals and hammers filling the air.

I was able to forget the day’s events as I enjoyed the relics tucked safely inside Murad Khane like an ancient secret, hiding in plain sight. But, it also took me a lot of prodding and probing to comprehend what happened with me that day and why.

I was later told that the people in Old Kabul are scared of cameras, not because they think of them as explosives. They fear that irresponsible outsiders will click photos and expose their hidden world to the persecutors who have been targeting them for decades.

To my oblivious mind, that woman’s reaction was nonsensical. But it took me a lot of time to understand that the minorities of Afghanistan walk on eggshells in a very fragile ecosystem. Respecting their boundaries, I tucked my camera safely in my bag before entering their secret world, allowing my mind and eyes to capture its rustic beauty. Who would have thought that something as harmless as a photograph of their environs can put their lives in grave danger?

Editor’s Note: The photos used throughout this article were taken by the author in the areas surrounding Murad Khane, not within the Old Kabul neighborhood. Crazy Girl (in a good way!) This USA female person would love to join you someday...Iran?  Afghanistan, even India!!  Keep up the good work....ek