Whether you’re a lifetime drag enthusiast or a RuPaul’s Drag Race newbie, there’s a lot to learn about the wide world of drag. Join us for this final installment in a four-part series exploring drag performance across the country, featuring artists and venues with unique regional identities. 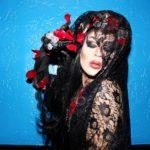 The gals of the Golden Coast have been doing drag for decades, from the gay mecca of San Francisco to cities further south. In some ways, this legacy makes performance spaces in the Bay City and beyond rich time capsules of queer culture. But it also provides a jumping-off point for many queens to try things never before seen.

To summarize the wealth of options afforded to drag connoisseurs in San Francisco is to undertake a project nearly encyclopedic in scope. But for contemporary audiences of the bearded beauty Grace Towers or dastardly duo The Boulet Brothers to truly understand the meaning of drag to Bay City residents, one must first explore its historic roots in the city’s queer community. 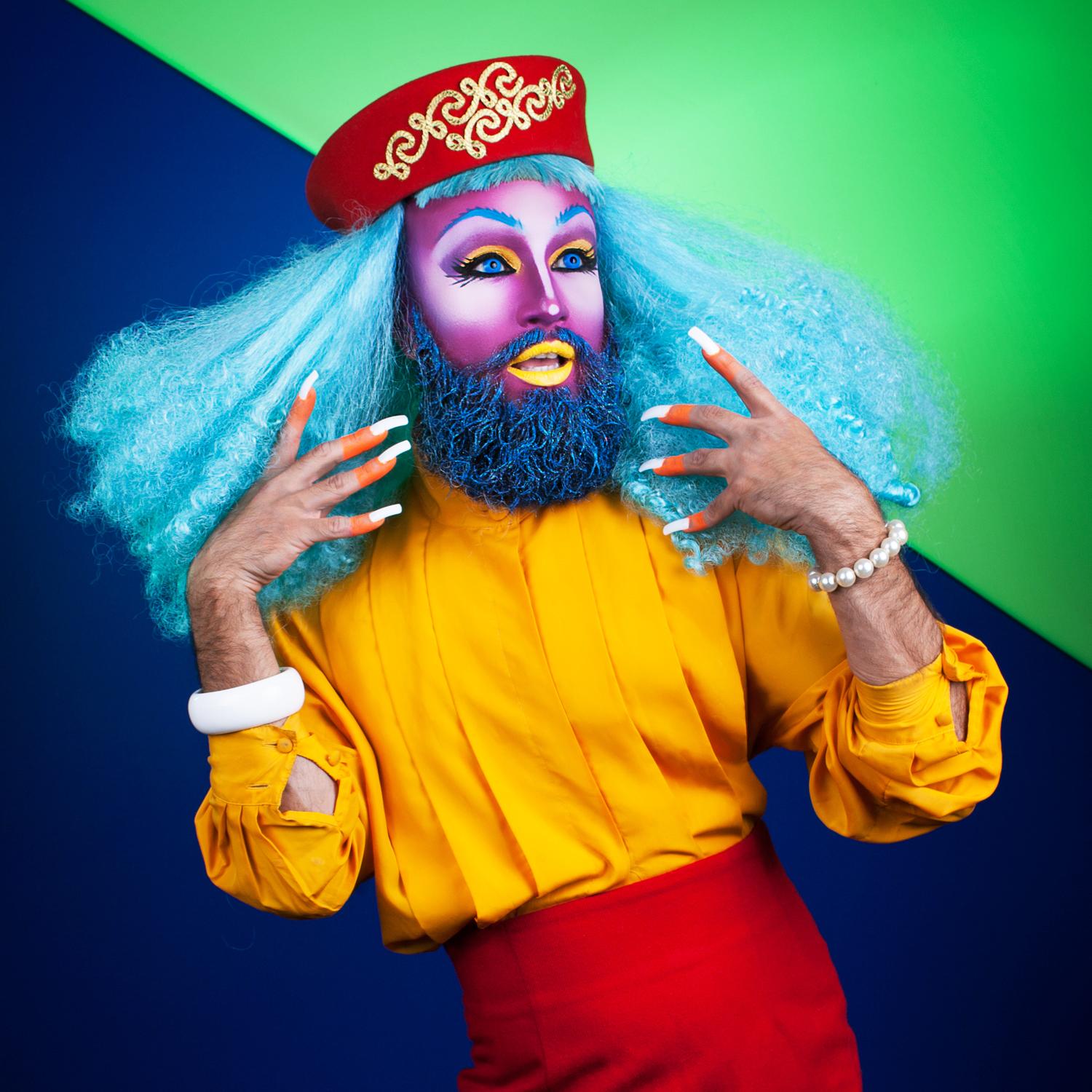 From 1989 to 2012, Marlena’s was once a safe haven in Hayes Valley for queers, queens, and over 1,000 Santa figurines. Named for its co-owner, a queen who once reigned as Empress of the Imperial Council, the bar served as a headquarters for the oldest gay fundraising organization in the world. While the club has been closed for half a decade, its name is still spoken reverently by performers and former patrons alike who have since moved on to new establishments and weekly revues. It was most known, perhaps, for the diversity of its patrons and staff—one former regular called it “the United Nations of ages and ethnicities.” Then, as now, drag performers knew what it meant to descend from a political event as charged as the Compton’s Cafeteria Riot of 1966.

For audiences who seek a more classic approach to drag, replete with powerhouses in stately costumes who lip sync the old standards, San Francisco still provides. The ladies of the Hot Boxxx Girls Review at Aunt Charlie’s Lounge have been taking the stage for 20 years. Three of their standout divas—Collette LeGrande, Donna Personna, and Olivia Hart—were featured in the James Hosking award-winning documentary Beautiful by Night, a short film that gives viewers a taste of the changing landscape of drag in the Tenderloin. It was not, as these ladies will tell you, all glitter and glitz.

“Aunt Charlie’s is near and dear to my heart,” says Hosking. “It’s a unique place as one of the last gay bars, along with the Gangway, in the Tenderloin neighborhood.” But there’s one more place James thinks you should visit while in town.

“The Tenderloin Museum is an amazing local history museum that highlights the fascinating social and political events that shaped this area, whether it be the LGBT movement, immigration, or housing rights and homelessness advocacy. I would also suggest a visit to Tu Lan or Little Saigon for amazing food prior to a show at Aunt Charlie’s.”

As Donna Personna elaborates, “Fifty years ago in San Francisco, the drag scene was more secretive. It was perpetrated in backrooms of bars late at night. The shows weren’t advertised; being queer was against the law. It was word of mouth. I saw it more as a chance to wear women’s clothes and to express a forbidden part of who we are… perhaps like speakeasies…. It was not good to be feminine then.” By the time Collette LeGrande got her start in 1976, drag had infiltrated the charity scene—a shift that occurred across the country as performers came out to support causes dear to the queer community. 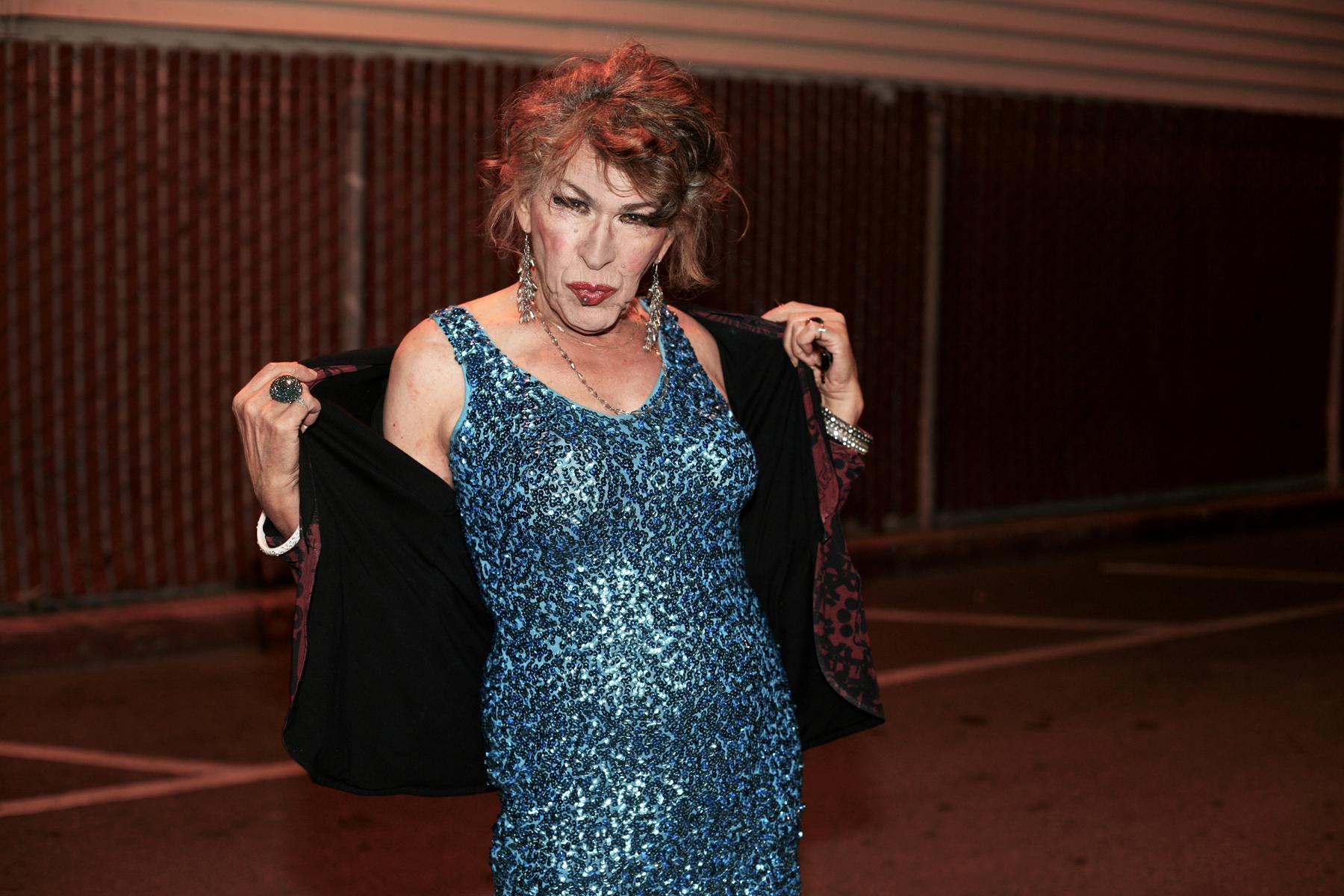 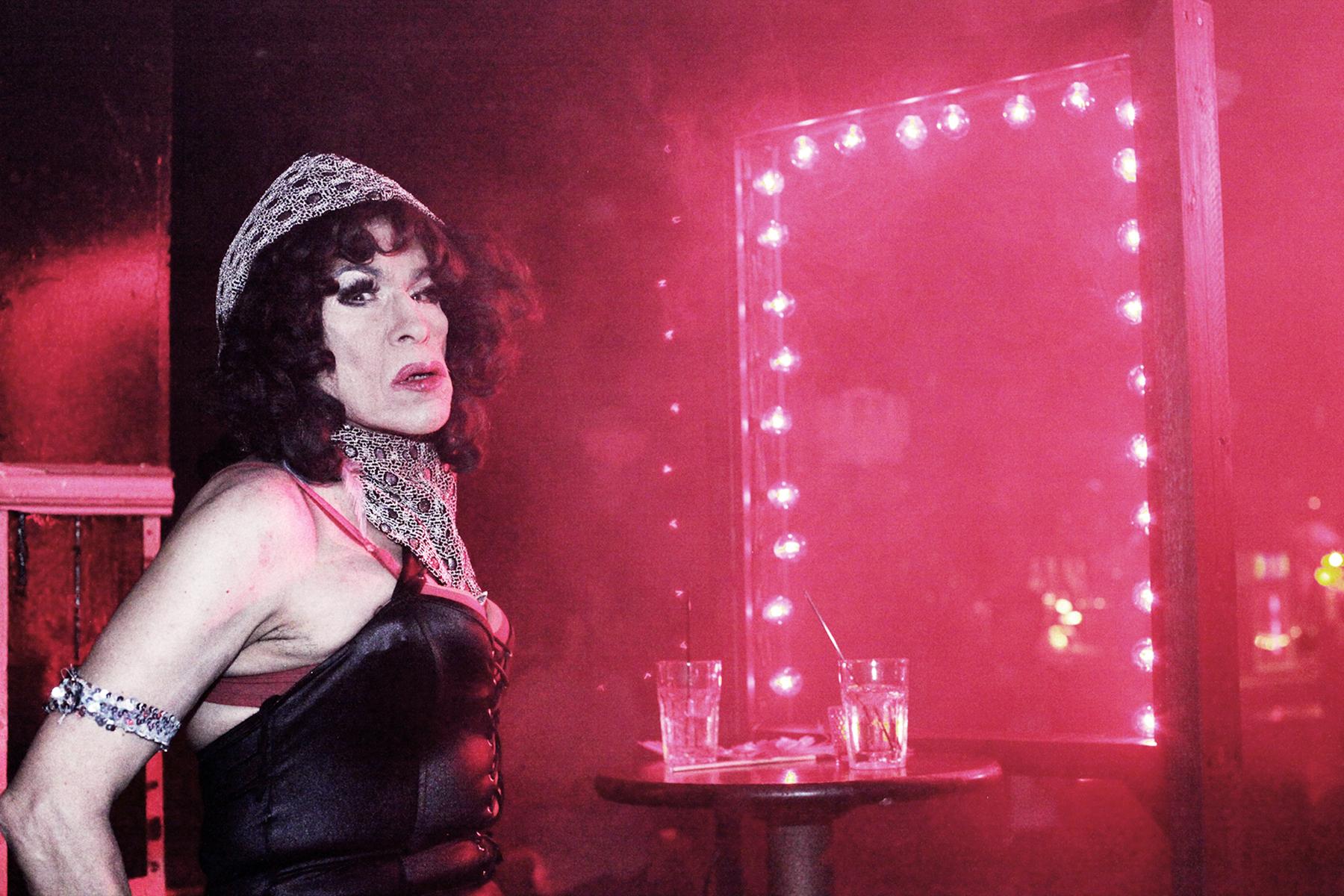 Remarkable for many reasons, Donna Personna’s career is especially notable due to the fact that she didn’t get her start until age 59. Inspired by a 2003 documentary about the San Francisco Cockettes, she began performing alongside friend and artist Rumi Missabu. Since then, she’s stood under the spotlight in at least 80 venues. Now 73 years old, Personna considers it part of her calling to teach younger queens what she’s learned over the years while also appreciating what they bring to the table.

“Today anything goes,” she says. “The young queens don’t follow any rules. They wear street clothes and don’t attempt passing as women. You will see hairy, flat chested queens with beards. There is more variety of acts and a spirit of inclusiveness and room for invention.” After 42 years in drag (and 10 years of hosting the recently-ended Dream Queens Revue), Collette still performs but is turning more to documentary work and script writing.

There are some hot spots that Donna and Collette recommend. For classic drag, try Aunt Charlie’s Lounge, the Stud (a 50-year-old institution), or Sunday’s a Drag with Donna Sachet at the Starlight Room of the Kimpton Sir Francis Drake Hotel. Be sure to book your reservations early, because these venues fill up quickly!

For a taste of burlesque and variety acts, head to Sophilya Leggz’s Peepshow. Housed at Codeword on Folsom St until the club closed permanently this July, the revue now travels to a number of venues in the Mission, Design District, and South of Market. And contemporary numbers are the focus in shows at the Midnight Sun (the Castro); Heklina’s “Mother” at Oasis Lounge; Ginger’s (the Financial District); and Divas Nightclub, which includes transgender performers; with a score of queens not to be missed, including Juanita More, Glamamore, BeBe Sweetbriar, and Alexis Miranda.

The Children Are Serving

In style and sensibility, queens like Carnie Asada and Au Jus definitely descend from their Bay Area foremothers. They’re committed to representing their queer constituents and showing audiences a gay old time. 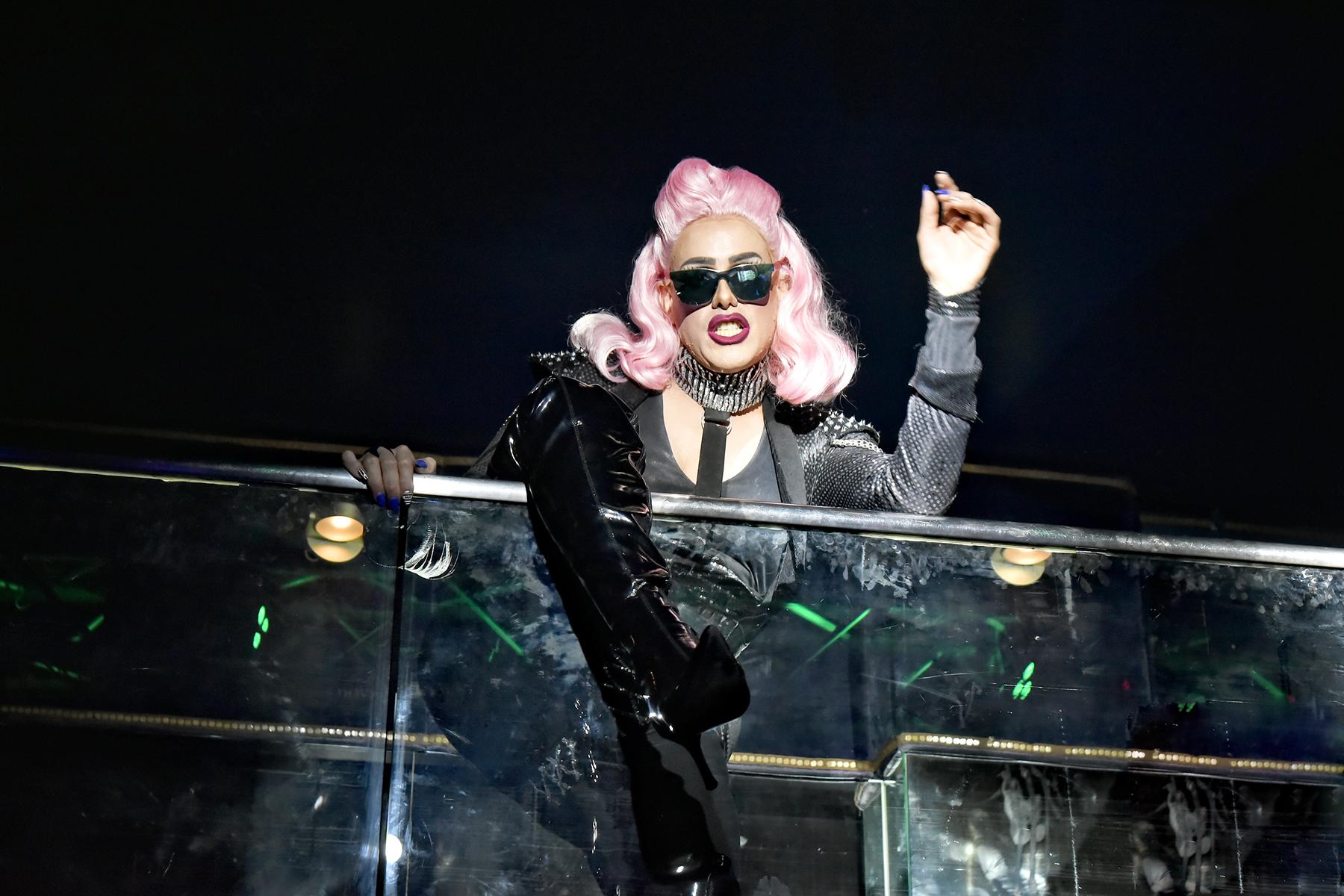 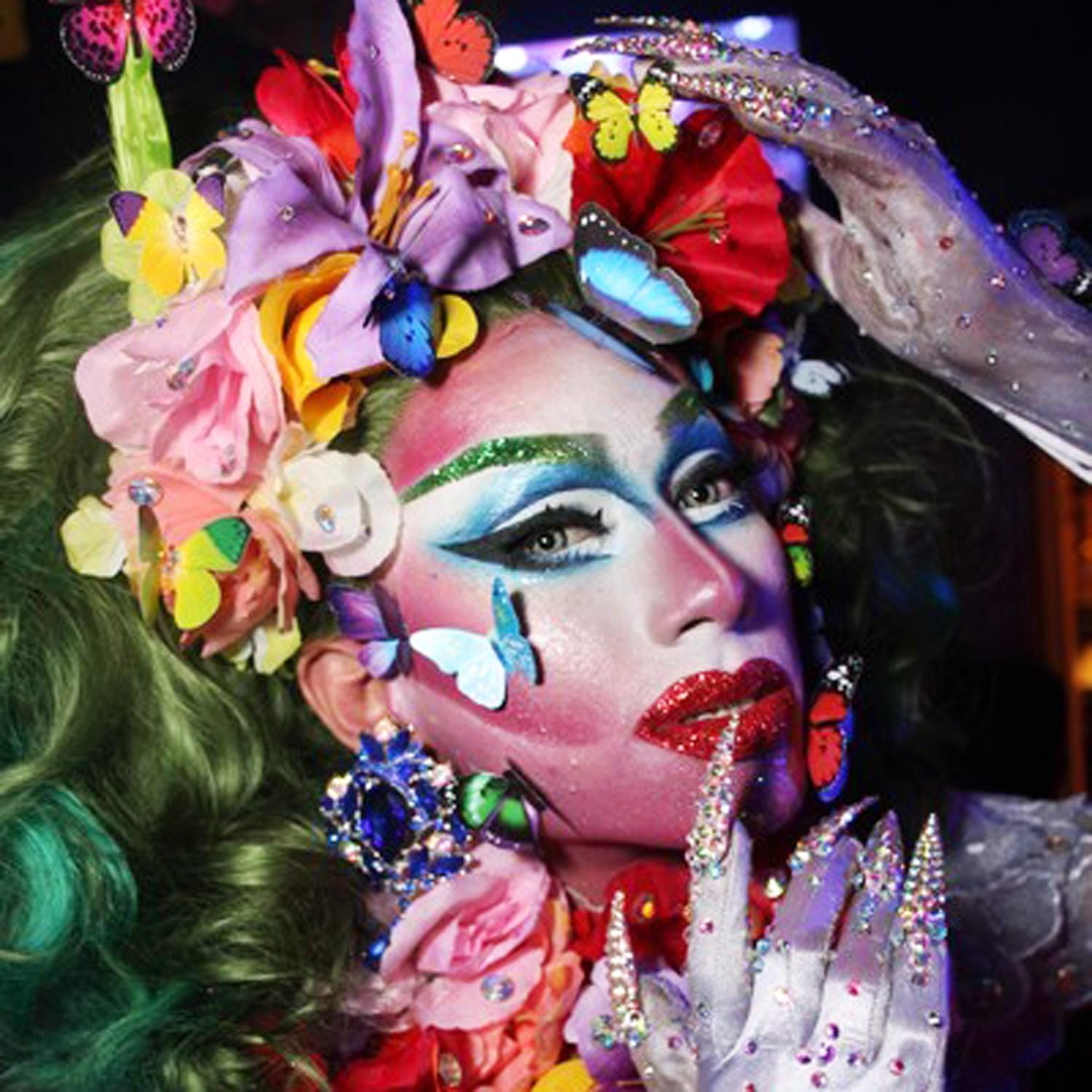 “I’m so inspired by the way that the community comes together for the art, for a good cause or just to celebrate each other,” says Jus, who hosts a weekly show at Beaux in the Castro.

Carnie agrees: “The best thing [about being a performer here] is meeting locals and people from around the world visiting San Francisco who are looking for a unique experience… I think the beauty of SF drag is that it can’t be labeled easily.”

Carnie’s picks for performances of note will nearly fill your week, with the added bonus of taking you on a mini-tour of the city. “I suggest venturing to ALL the neighborhoods and shows,” she says. “Each one has a unique flavor.” 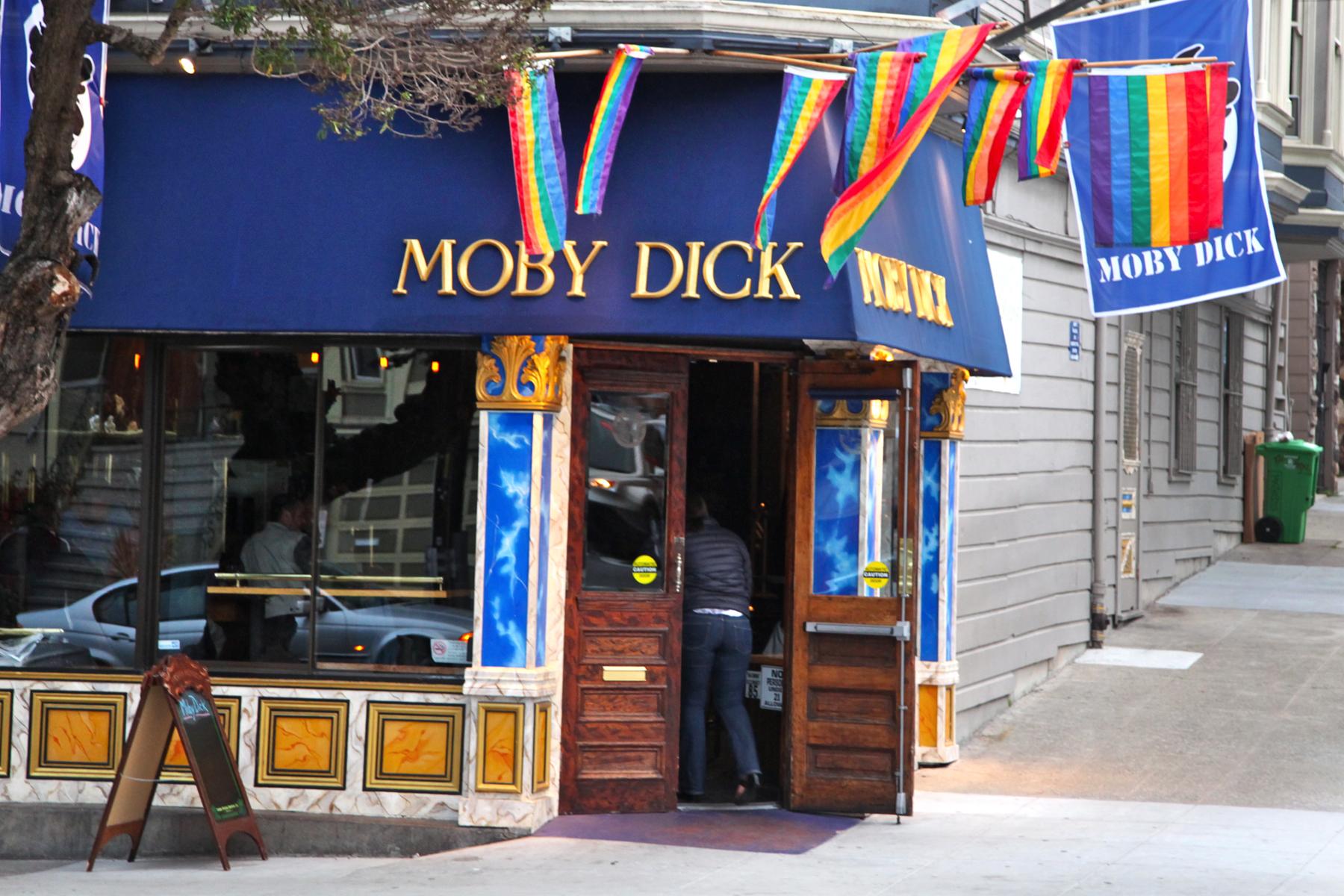 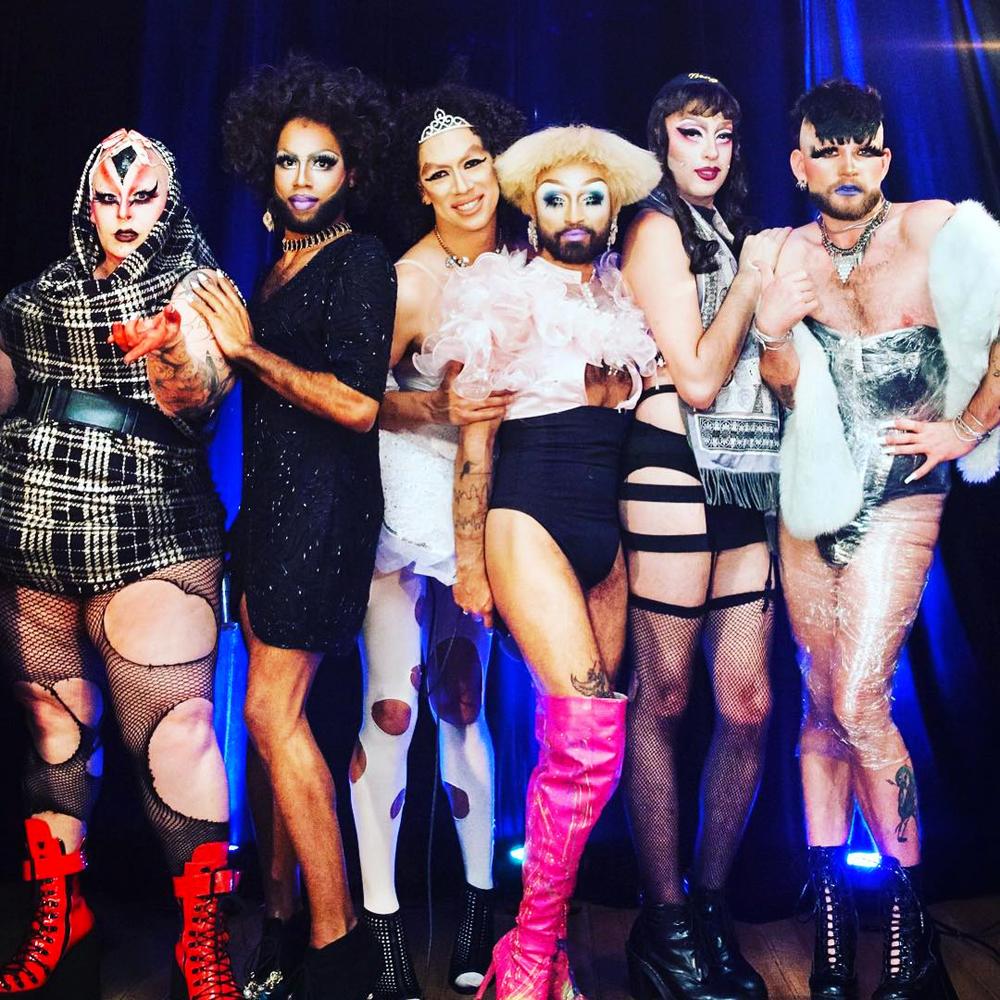 With a name like hers, is anyone surprised at this tip from Au Jus? “SF is a foodie city! Do not miss out on the many amazing restaurants here: Starbelly, Lark, Alba Ray’s, The Slanted Door, Hard Knox Cafe, San Tung, and others…. so many good places to wine and dine.” 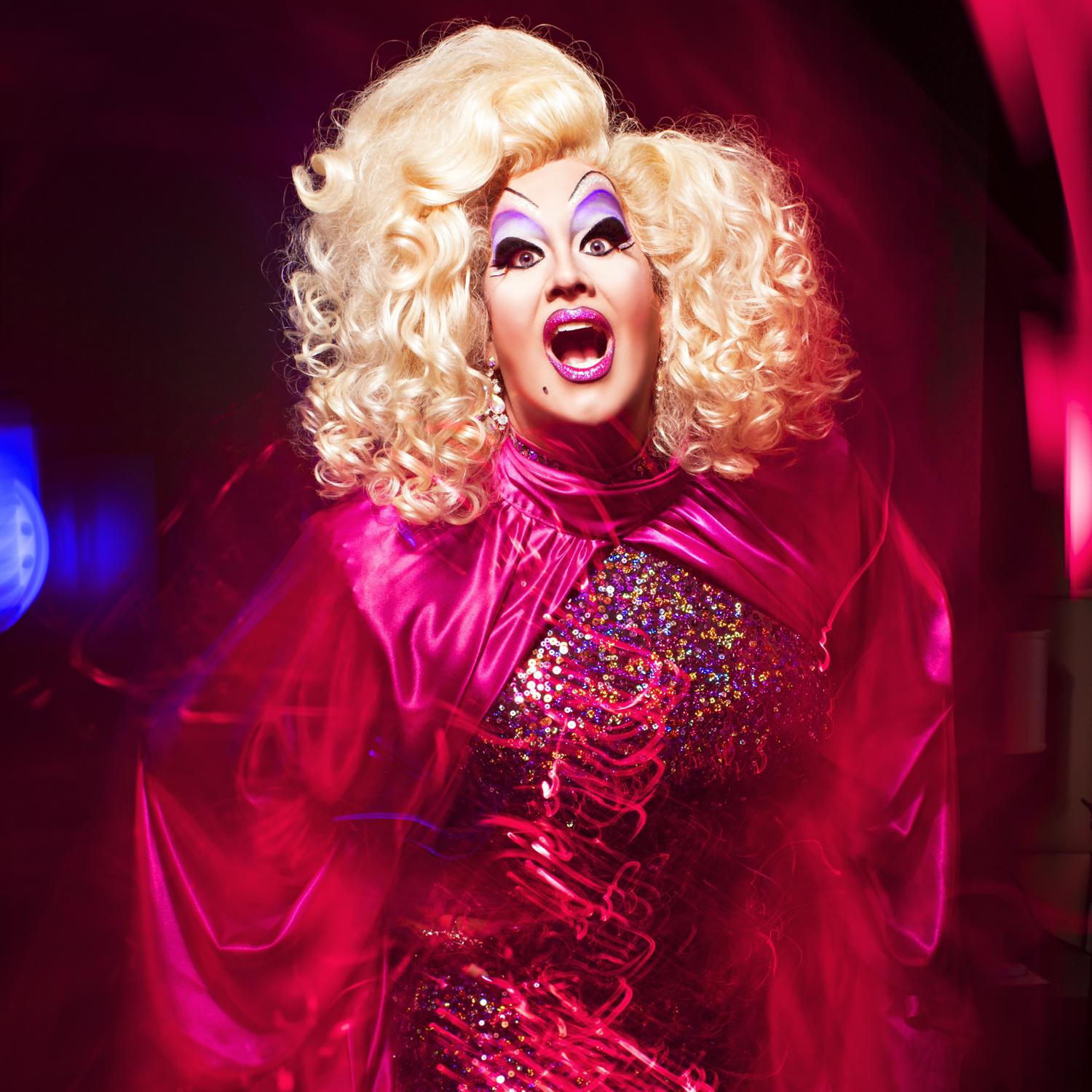 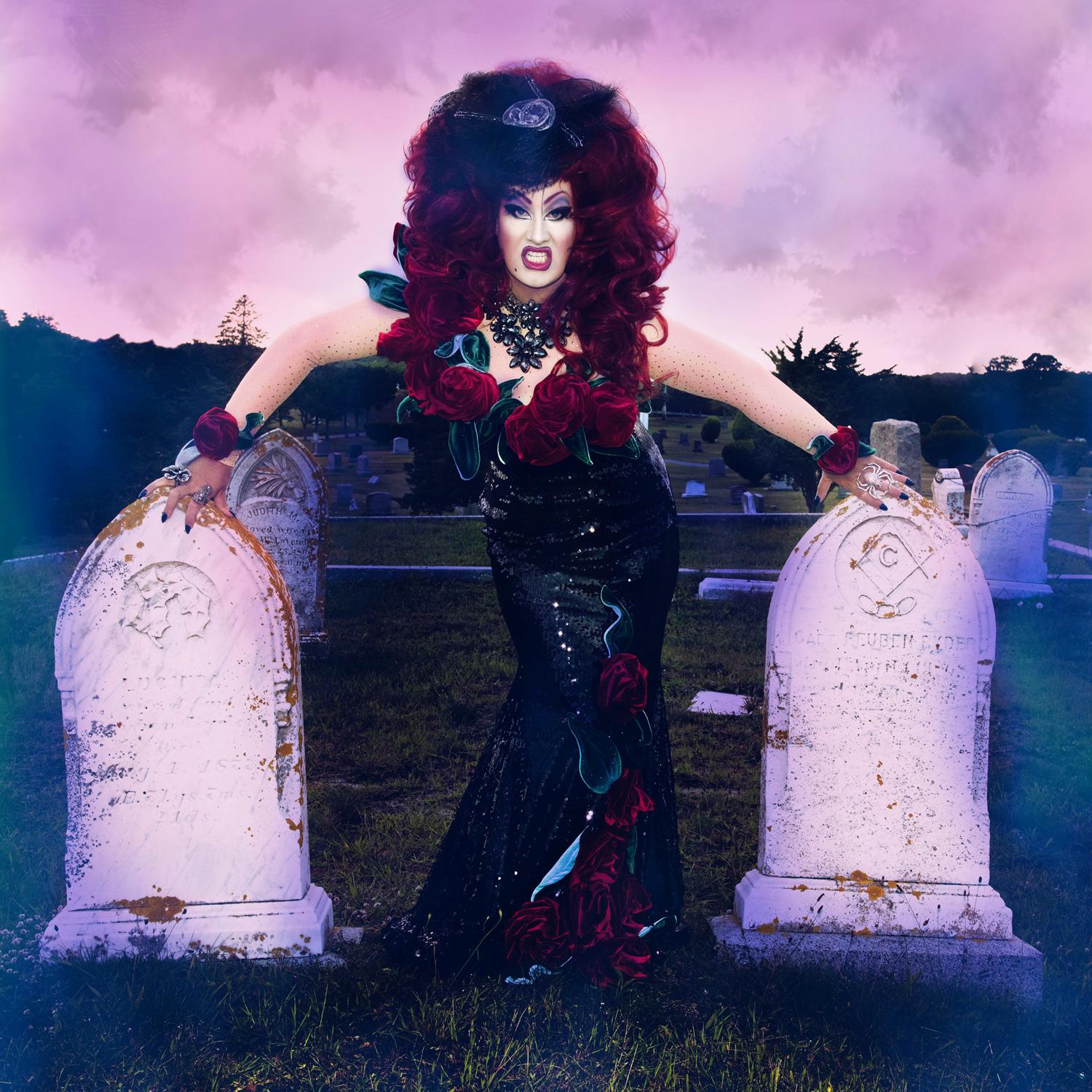 The drag scene in San Francisco may be vibrant, but it’s not the only option California offers. Fans of RuPaul’s Drag Race and Top 40 numbers should head to West Hollywood, downtown Los Angeles, Pasadena, and San Diego for big-name performers and trendy nightclub settings.

What’s the right club for you? It depends on your style. Where Precinct in downtown LA will give you a rock and roll, genderf*ck, Boulet Brothers’ Dragula feel; The Boulevard Bar in Pasadena features homespun drag in a friendly neighborhood atmosphere. Another unassuming locale is Gold Coast in West Hollywood. Two favorite edgier venues of Raja Gemini, Drag Race season 3 winner, include Bar Mattachine and Redline in LA. 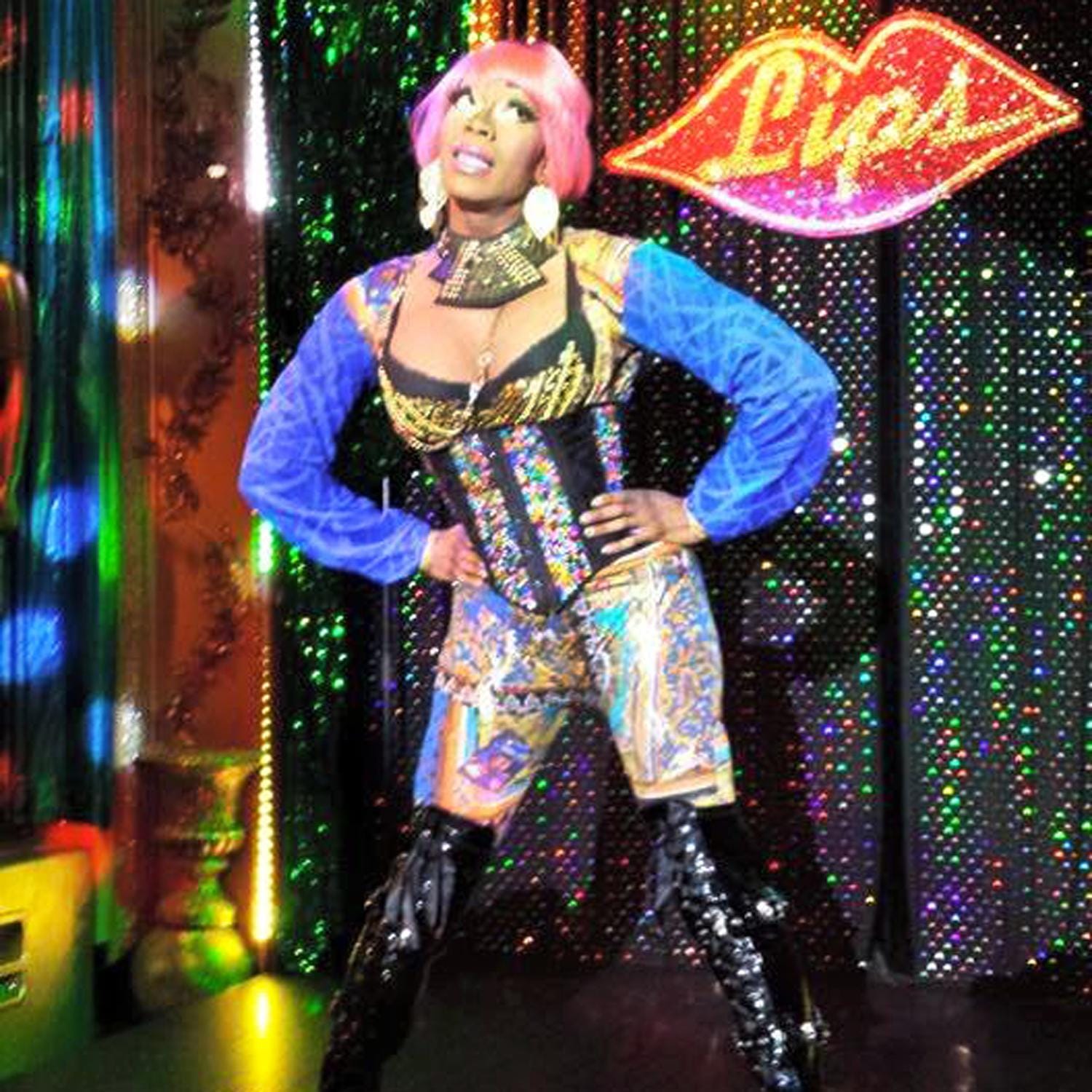 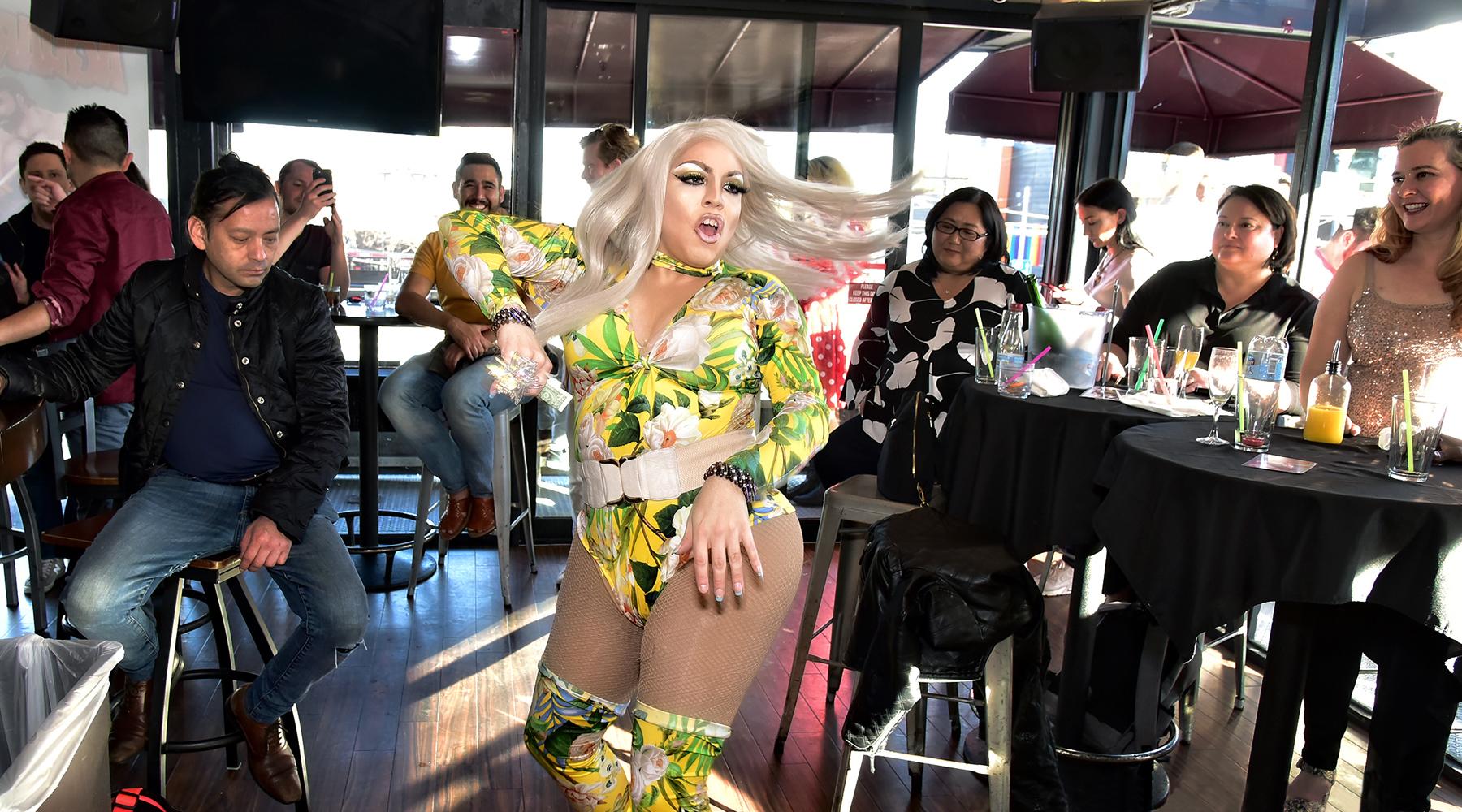 There’s no shame in visiting a “gateway venue,” either. Each with its own unique appeal, these nightclubs tend to feature well-known queens from Drag Race for superfans and drag newbies alike. In WeHo, you can venture to Hamburger Mary’s, Micky’s, and the Abbey. San Diego options include Urban MO’s, Lips, and Gossip Grill. 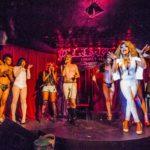 Pop a little further north and you’ll find that the Beaver State isn’t all lumberjacks and small businesses—there’s also a strong history of drag! At the center of Portland’s drag scene is Darcelle XV Showplace, a nightclub that’s been around for 51 years. The featured performer is none other than Darcelle herself, who turns 87 this year.

Other performers can be found throughout the city at Stag PDX, the second-ever gay adult entertainment club on the West Coast, CC Slaughters, and Crush Bar. These venues serve the whole of the city’s queer community, and that’s reflected in the variety of entertainment they feature—from drag to burlesque to body-positive dance parties and live art classes.

We all know drag superstar Alaska 5000, but did you know there are real, live queens in Alaska? Hawaii, too! Spice up any Alaskan cruise with a stop at Rendezvous in Juneau or Mad Myrna’s in Anchorage. And your trip to Honolulu won’t be complete until you uncover the storied, complex overlap between drag performance and the māhū (or “third gender”a) people of Hawaii. Two clubs featuring weekly revues in Oahu are Scarlet Honolulu and Hula’s Bar and Lei Stand. 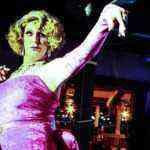 The saloon girls of Seattle—like Jinkx Monsoon, BenDeLaCreme, and Robbie Turner—have made their mark on the Drag Race canon over the years, but they’re only one side of Seattle’s quirky scene. Julia’s on Broadway, Unicorn/Narwhal, and the Can Can in Pike Place Market are great venues to visit if you’re looking for campy, theatrical performances like the ones popularized by these queens.But if you’re seeking something a little more punk and rough around the edges, try a venue like Kremwerk/Timbre Room. Here you’re more likely to find Butylene O’Kipple and Harlotte O’Scara from the Haus of Kipple; Monikkie Shame and James Majesty, who were both featured on the Boulet Brothers’ Dragula; and other funky Arthaus queens. 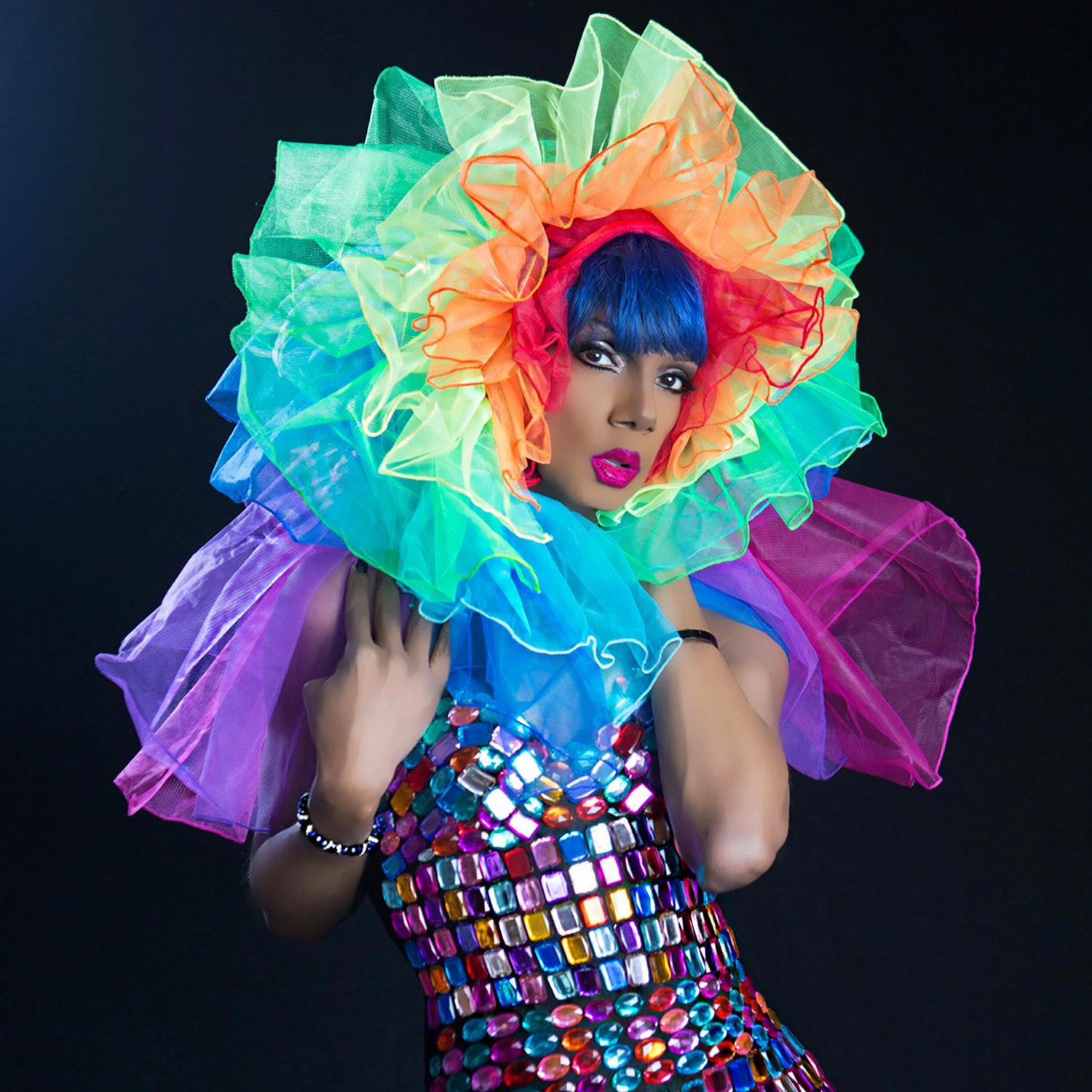 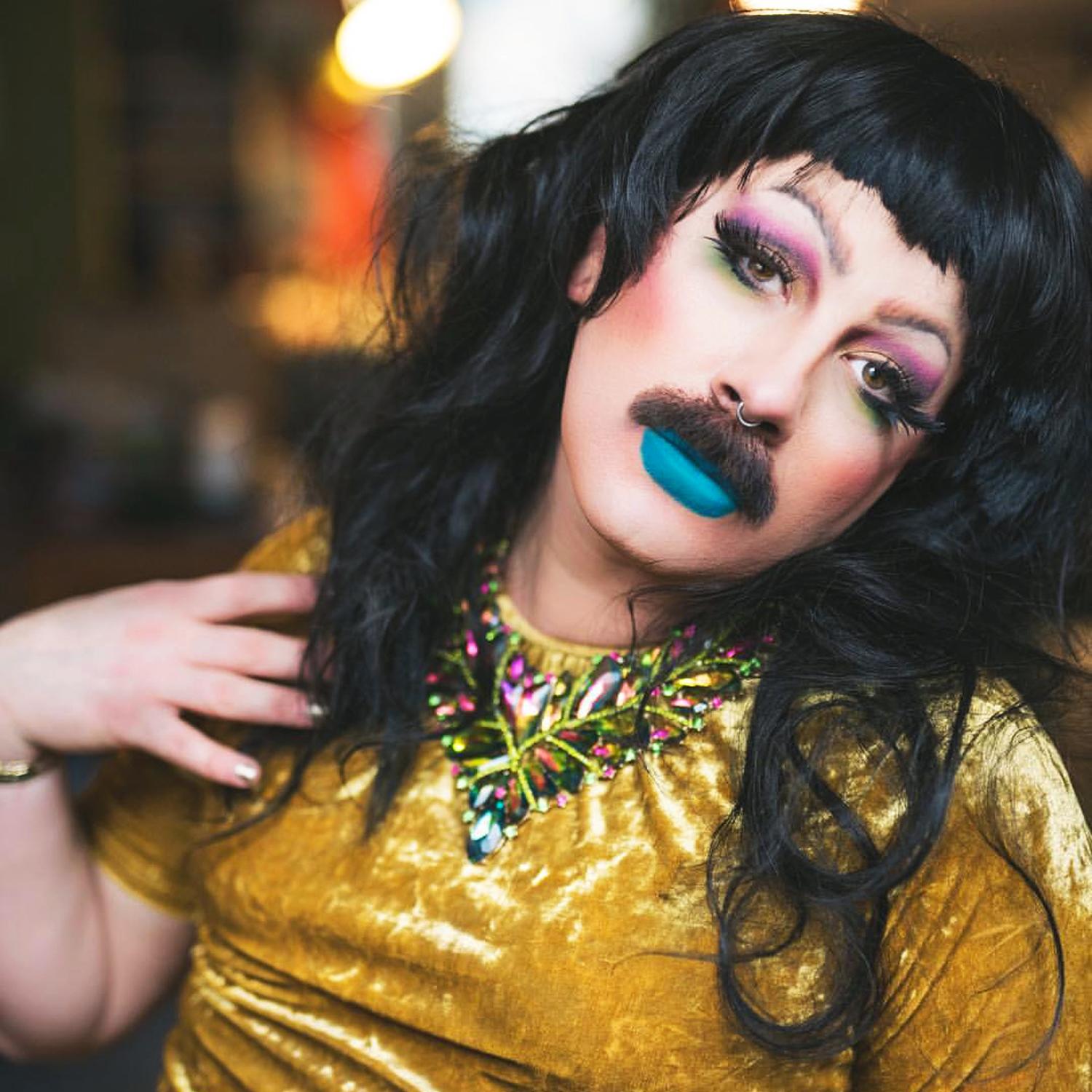 Painted by the Gods

Red rock striations across the badlands aren’t the only natural wonder Arizona has to offer. There’s also costume designer and University of Arizona faculty member Patrick Holt, who performs as Tempest DuJour at the Hotel Congress, a historic landmark in Tucson. If Retro Game Show Nights aren’t your thing (but really… why not?), head to a drag show at Cruisin’7th in Phoenix instead for more classic entertainment. 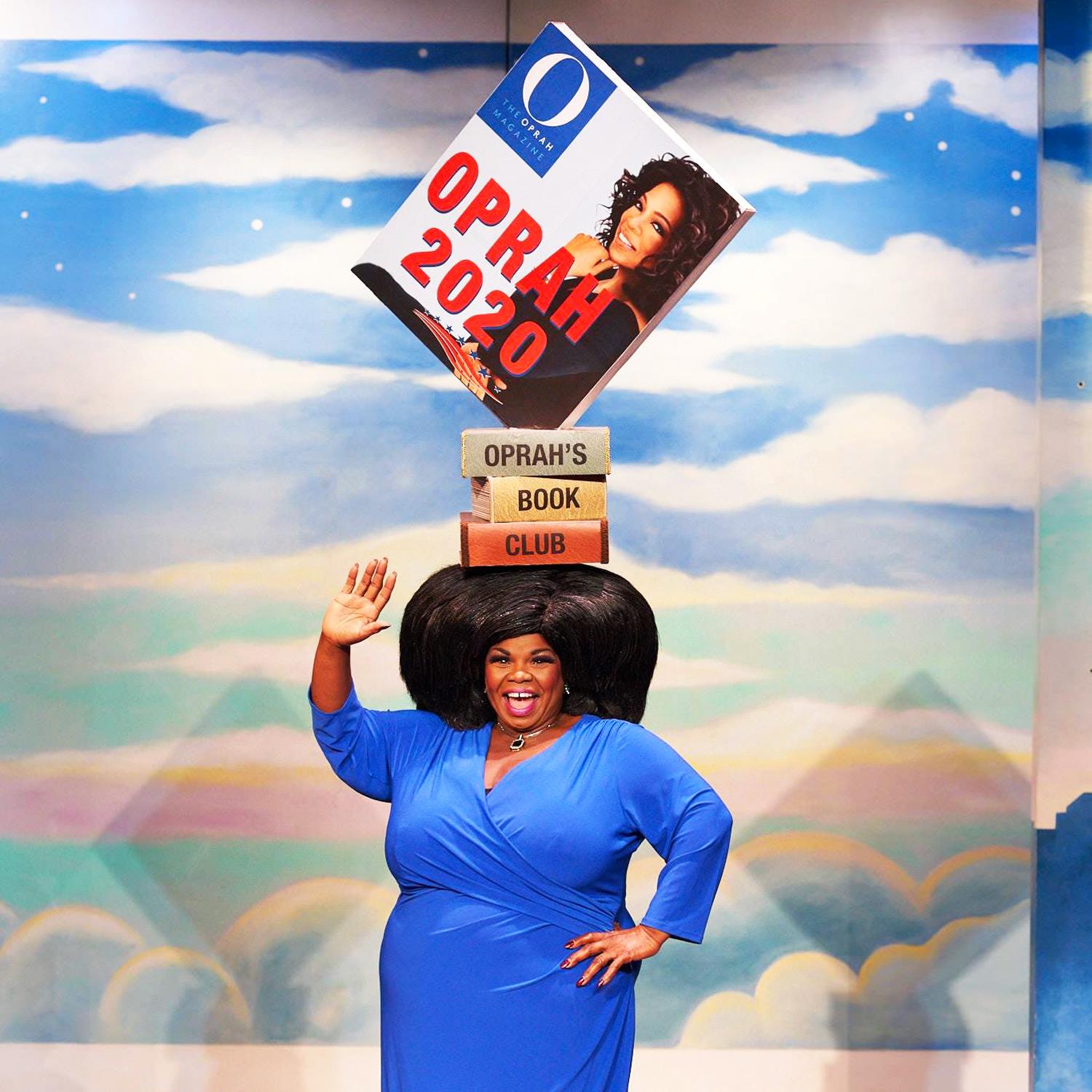 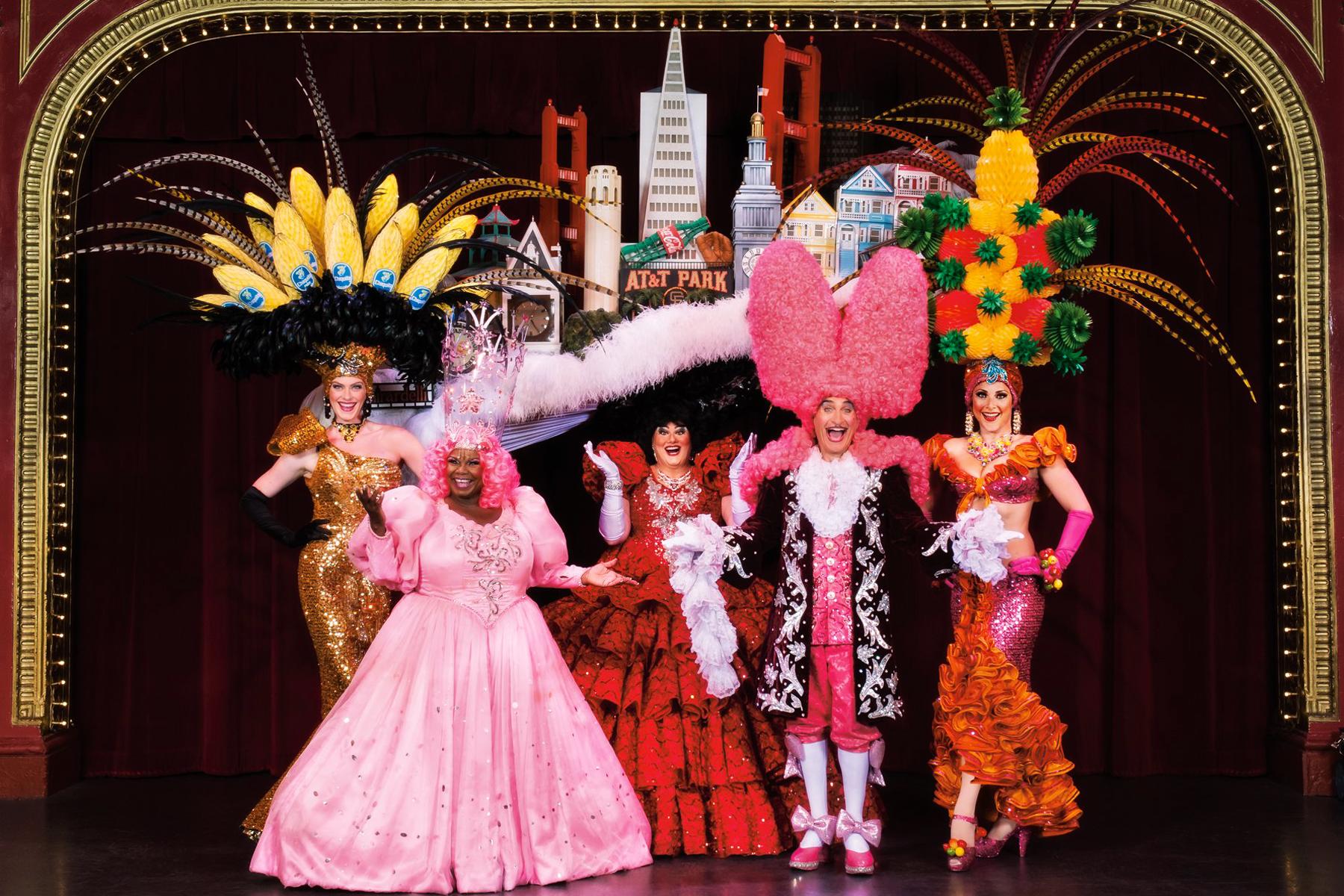 From Brooklyn to Pittsburgh and Orlando to Salt Lake City, it’s certainly been a trip. We hope you remember to tip your queens, have fun, and never forget Carnie Asada’s advice while you look for the next best drag show to frequent: “Ask the residents. Shows are happening constantly. The best scoop is the inside scoop!”