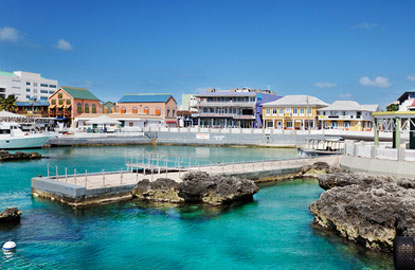 After Hurricane Ivan swept through the Cayman Islands, followed by Hurricane Paloma in 2008, many local restaurants and eateries were permanently shut down. But since then, a number of casual and fine dining destinations have opened on the island of Grand Cayman. Picture a mix of both local restaurateurs along with popular chefs from the U.S. such as Eric Ripert and Michael Schwartz. Many deem Grand Cayman one of the best culinary destinations in the Caribbean—judge for yourself with our favorites for your next visit.

The newest restaurant in the Cayman Islands (just a month old!), Blue Cilantro is run by the convivial Chef Vidyadhara Shetty—president of the Cayman Culinary Society and formerly of the Hyatt Regency Grand Cayman. At Blue Cilantro Chef Shetty brings classic Indian cooking techniques and preparation to local cuisine. The three-course prix fixe menu is an excellent deal for the indecisive but the more adventurous should order a la carte.
Menu highlights: Start with the tandoori soft-shell crab as an appetizer, then move on to fresh pomfret cooked in a clay oven and served with basmati rice. Don’t miss out on the housemade chutneys and flatbreads flavored with roasted garlic and black onion seeds.
Learn more: Blue Cilantro

Opened in 2008 and with a recently resigned lease, Eric Ripert’s Blue is impressively the only restaurant in the Caribbean with a AAA Five Diamond Award. Situated inside the The Ritz Carlton Grand Cayman, Blue incorporates all the elegance and luxury of New York City’s Le Bernardin (with a few of the same classic menu items and focus on seafood dishes) into a breezy beach setting. Come for a formal dinner, or drop by the bar for drinks and appetizers.
Menu highlights: Wahoo tartare and Ripert’s signature appetizer of paper-thin yellowfin tuna sashimi draped over foie gras. For dessert, don’t miss the plush ginger parfait with a soy sauce-kissed caramel.
Learn more: Fodor’s Blue by Eric Ripert Review, The Ritz Carlton Grand Cayman Review, Le Bernardin Review

A not-to-be missed elegant dining experience while in the Cayman Islands, Osetra Bay, as the restaurant name implies, boasts an enviable caviar selection. While it’s been open for two years, it’s the hot restaurant of the moment and the kitchen manned by Chef Joseph Watters offers a global menu that spans all the way from oxtail agnolotti to mahi mahi and smoked Spanish octopus. Save this visit for special occasions and romantic dinners.
Menu highlights: Housemade pastas such as the crab tagliolini and a incredibly tender oxtail agnolotti, seared wahoo and local snapper with a variety of mushrooms, sweetbreads paired with tiny pearl onions, and don’t forget the caviar.
Learn more: Osetra Bay

The Brasserie is in the George Town area of Grand Cayman, tucked in Cricket Square. Enter through the back garden to sneak a peek at all the fruit (such as bananas and breadfruit), vegetables, and herbs grown in-house for restaurant use. Many eateries boast local ingredients, but Brasserie takes it another step further by employing two full-time fisherman and their own fishing boat. Fresh seafood for every meal of the day, guaranteed.
Menu highlights: Shrimp and cilantro topped flatbreads, the daily catch prepared tartare-style with avocado and sambal, conch tempura, and tiny roasted pineapple beignets for dessert.
Learn more: The Brasserie

Thinking of a trip to the Cayman Islands?

For up-to-the-minute hotel and restaurant recommendations, plus the best planning advice, check out our online travel guides to the Cayman Islands and Grand Cayman.