News Apeksha Bhateja What Are the Chances You'll Get Monkeypox at a Hotel?
NewsA Historical Look at NYC’s Most Famous Landmarks

A Historical Look at NYC’s Most Famous Landmarks 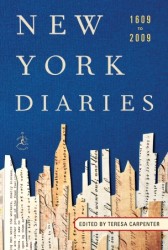 It’s no secret that Fodor’s travelers love New York. It’s the most searched destination on our site, and we’re always looking for insider information and unique perspectives about the city to share with our readers. Lately, we’ve been enjoying New York Diaries, a collection of diary entries about the city, compiled by Pulitzer Prize winner and New York Times-bestselling author Teresa Carpenter, a lifelong diary enthusiast. She scoured the archives of libraries, historical societies, and private estates to assemble a fascinating view of this iconic metropolis. These "snapshots" come from the diaries of real people and celebrities, natives and visitors, from the 1600s to the present. 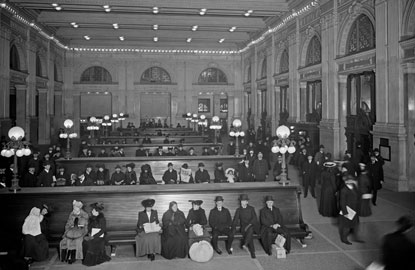 "Today I arrived by train in New York City, which I’d never seen before, walked through the grandeur of Grand Central Terminal, stepped outside, got my first look at the city and instantly fell in love with it. Silently, inside myself, I yelled: I should have been born here!" —Edward Robb Ellis, journalist with New York World Telegram 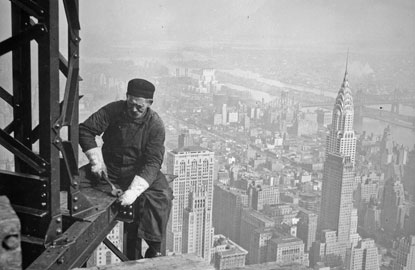 "An evening up on the Empire State roof—the strangest experience. The huge tomb in steel and glass, the ride to the 84th floor and there, under the clouds, a Hawaiian string quartet, lounge, concessions and, a thousand feet below, New York—a garden of golden lights winking on and off, automobiles, trucks winding in and out, and not a sound. All as silent as a dead city—and it looks adagio down there." —Dawn Powell, Midwestern-born novelist and playwright 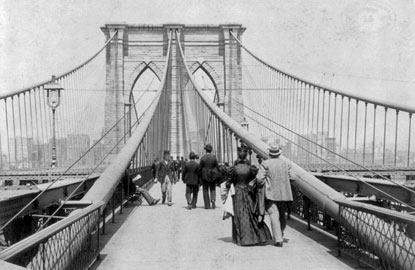 "Passing out into the sunlight we walked along the driveway over-looking the park as far as 125th street where we took the car going three quarters of an hours…down to Brooklyn Bridge on the east side. What a change in the scene…Here was life in the Bowery, old men, young men, women and children all jostling, crowding and yelling at each other in their bowery slang. Looking so queer in their odd dress. We caught a glimpse of the celebrated Chinese quarters with its dark and dinginess. Presently we came to the Brooklyn bridge. Here again was hurrying and bustling. Down below…there was the dark deep water of the East river…with the vessels and steamboats and large ferries running to and fro. We just went to the center of the bridge…then turned around and started back…It was just dusk and it looked as if the buildings were a great dark mountain and the lights looked like gems among them."—Naomi R. King, author of My First Visit to New York, the travel diary of a 12-year-old girl from Indiana 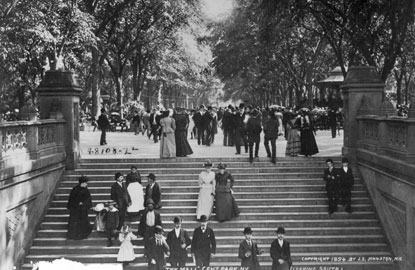 "Improved the day by leaving Wall Street early and set off with G[eorge] A[nthon] and Johnny to explore the Central Park, which will be a feature of the city within five years and a lovely place in A.D. 1900, when its trees will have acquired dignity and appreciable diameters. Perhaps the city itself will perish before then, by growing too big to live under faulty institutions corruptly administered…We entered the park at 71st St[reet], on its e[ast] side, and made for "The Ramble," a patch just below the upper reservoir…it promises very well. So does all the lower park, though now in most ragged condition: long lines of incomplete macadamization, "lakes" without water, mounds of compost, piles of blasted stone, acres of what will be greensward hereafter but is now mere brown earth; groves of slender young transplanted maples and locusts, undecided between life and death, with here and there an arboricultural experiment that has failed utterly and is a mere broomstick with ramifications… The work seems pushed with vigor and system… Narrowness is its chief drawback. One sees quite across this Rus in Urbe at many points… Roads and paths twist and twine about in curves of artistic tortuosity. A broad avenue, exceptionally straight (at the lower end of the park) with a quadruple row of elms ill look Versailles-y by A.D. 1950. On the 5th Av[enue] side, the hideous State Arsenal building stares at students of the picturesque, an eyesore that no landscape gardening can alleviate. Let us hope that it will soon be destroyed by an accidental fire." —George Templeton Strong, lawyer from a privileged New York family.