Following the passage on June 24, 2011, of the Marriage Equality Act, New York has become the sixth state in America that grants marriage licenses to same-sex couples. We’ve got the basics for LGBT partners looking to exchange vows. Hotels and popular event spaces from New York City to Niagara Falls are celebrating the passage of this progressive law by introducing special deals, both for weddings and honeymoons. 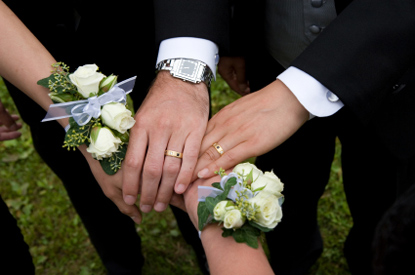 What You Need to Know

Whether you’re a New York resident or you’re visiting from another state or even country, you’ll be able to marry legally in the Empire State once the act goes into effect, on July 24. You can find information on planning a wedding and obtaining a marriage license by visiting the same-sex marriage FAQ website that New York City’s official tourism office, NYCGO.com, has created as part of its "NYC I Do" gay marriage campaign.

From luxury properties like Le Parker Meridien, The Pierre, and the Ritz-Carlton Battery Park, to more affordable brands like the boutique GEM Hotels in Chelsea, SoHo, and Midtown, many Big Apple hotels are putting together packages to court the same-sex wedding business. One especially attractive deal: W Hotels four NYC properties are promoting a "Right to Unite" same-sex marriage packages that includes a suite, car service to and from City Hall, a flip-cam to document your nuptials, champagne and wedding cake, and several other fun perks starting at $1,019 per night. Plus, plan your wedding at either the W New York or W Union Square, and you’ll receive two free nights to celebrate your honeymoon at Puerto Rico’s W Vieques.

The Millennium Broadway has teamed with the gorgeously renovated historic Hudson Theatre to create a "Wedding with PRIDE Package" that includes a reception with prices starting at $195 per guest, plus 15% off accommodations. And the venerable gay-owned Chelsea Pines Inn is hosting a contest for gay couples who marry on the first day the law takes effect. One winning couple will receive a free night in the inn’s honeymoon suite, complete with champagne and cupcakes. And all who enter and get married this summer will be offered a $199 rate for the suite (which usually goes for $399). For more deals, check out the NYCGO.com listings of more than a dozen Pride in the City packages.

Best Bets Beyond the Boroughs

Plenty of other cities around the state are rolling out the rainbow carpet. Couples can take the plunge in Niagara Falls, recently touted as one of the country’s best destinations for same-sex weddings, and the town clerk in Long Island’s North Hempstead is one of several around the state taking the rare step of opening its offices on Sunday, July 24 (the first day that gay marriage is legalized).

The prestigious Lessing’s company, which operates a number of elegant Long Island restaurants and event spaces, including the Vanderbilt Mansion in Centerport and the Estate at Three Village Inn overlooking Stony Brook Harbor, has highlighted its gay wedding venues on one convenient website. And in the Adirondacks, the swanky Mirror Lake Inn has unveiled a New York Honeymoon deal that includes two nights’ accommodation, one dinner in the renowned View Restaurant, one spa service per person, and complimentary robes starting at $1,350 per couple.