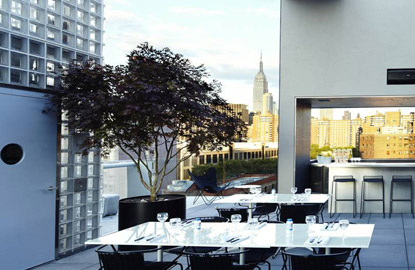 Outdoor hangouts are a vital part of warm-weather living in New York City. And this season, there’s a crop of new hotel-tops among the city’s offerings. Here are some of the newest rooftop hotel haunts ripe for some summer socializing.

Battery Park’s new Conrad New York boasts a 16th-story rooftop space with killer downtown views of the Statue of Liberty and New York Harbor. The hotel bar will be the first in the US to have Prosecco on tap via UnoKegs and will be dishing out their own house-made "boozy popsicles." Loopy Doopy opens mid-May.

La Piscine at The Americano

The Americano is a newcomer to Chelsea complete with a 10th-floor rooftop pool bar and Mediterranean-style grill restaurant. Guests can lounge on daybeds and in cabanas around the shallow pool (more for looks than laps) while gazing over the High Line, Hudson, and Empire State building. La Piscine opens May 1. The grill (6pm to 11pm, Mon-Thurs; noon-midnight, weekends) and bar is open to all; the pool, sadly, is for guests only.

The Rooftop at Pod 39

Then, these hotel-tops aren’t brand new but they didn’t get a fair shake last summer since all three opened mid-season and they’re worth a look.

The bi-level PH-D at Dream Downtown evokes an extravagant penthouse feel and blasts DJ beats from its state-of-the-art audio system. Z Roof at Hotel Z in Long Island City is a 5,000-square-foot perch with sick skyline views of Manhattan. Brooklyn Terrace at Aloft Brooklyn comes with indoor and outdoor space, a lounge-y vibe, and sweeping views over Brooklyn, the Statue of Liberty, and the Verrazano Bridge.

Photo credits: Courtesy of the Americano and the Conrad New York