News Apeksha Bhateja India Is Experiencing a Brutal Heatwave. Here's Why It Matters to You
Home  >  News   >   Escape from Manhattan! NYC’s Best Day Trips Off the Island

Escape from Manhattan! NYC’s Best Day Trips Off the Island

New York has much to offer besides the borough of Manhattan. Though you could quickly fill a week-long itinerary with the conventional New York City sights—the Empire State Building, the Metropolitan Museum, Central Park, SoHo, Chinatown, and on and on—you’d miss a lot that way. Only a fraction of the New York metropolitan area’s residents actually live in Manhattan, so to take a chance and see what else is going on around the city will provide you with cultural insights and experiences that just can’t be had anywhere else.

Without further ado, then, we offer you some of our favorite ways to escape the hustle and bustle of Manhattan—including things to do in Brooklyn, Staten Island, Queens, the Bronx, and Hoboken (an honorary “sixth borough”). Settle in… it’s quite a long list! 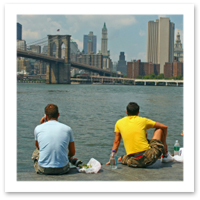 The best way to enter this magnificent borough is by its most majestic bridge. Walking across the wooden pedestrian path of the Brooklyn Bridge—a classic New York experience—takes about 30 minutes, all worth it for the panoramic views of the skylines and the harbor. It’s also a great way to transition from the bustle of Manhattan into Brooklyn’s slower pace.

After you exit onto Cadman Plaza, walk southwest to poke around Brooklyn Heights, a charming neighborhood of posh 19th-century brownstone homes, or walk north into the hip nabe of DUMBO to grab a slice at legendary Grimaldi’s Pizza.

To get to Brooklyn’s sights more quickly, take the 2 or 3 train to the Eastern Parkway/Brooklyn Museum stop. The museum, the Botanic Garden, the Children’s Museum, and Prospect Park are all close, and a weekend trolley makes it easy to combine attractions.

Alternatively, eating your way through Brooklyn is one of the best ways to experience the mix of old, new, and immigrant cultures that make the borough so vibrant. Carroll Gardens perhaps best epitomizes this; here 50 years of Italian heritage are met with an acclaimed restaurant scene on Smith Street. Take the F train to Bergen and stroll south on Smith to standout restaurants like Grocery or Saul, then walk off your meal along leafy Court Street, stopping at one of its bakeries for dessert. (Try Monteleone & Cammareri for authentic Italian pastries and breads.)

One of Staten Island’s biggest attractions is free—the phenomenal view of Manhattan and the Statue of Liberty afforded by the 25-minute ferry ride across New York Harbor. From Whitehall Terminal at the southern tip of Manhattan, catch the ferry every half hour on weekdays and weekend afternoons. On the way over be sure to sit on the starboard side of the boat, as that’s where the best views of Lady Liberty can be had. If you just want to ride out and back (as many people do) you’ll have to exit the boat on the Staten Island side and get back on via the boarding area where new passengers are congregating.

Baseball fans should make an afternoon of this trip by catching a Staten Island Yankees game. Just a few steps from the ferry terminal is Richmond County Bank Ballpark, where the “Baby Bombers”, a minor league affiliate of the New York Yankees, make their home. Games usually start at 7pm.

Staten Island Ferry: On weekend mornings until 11:30 AM, ferries run every
hour on the half hour. From 11:30 AM until 7:30 PM, they run every half hour. To get to the terminal take a 4 or 5 train to Bowling Green, or R or W train to Whitehall St., 1 to South Ferry. 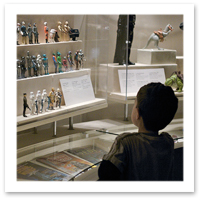 Museum lovers should look beyond Manhattan’s Met-MoMa-Guggenheim cluster. In Particular, Queens has much to offer in the way of edifying sights. Long Island City (L.I.C.) is the outer-borough art capital, boasting the MoMa-affiliated P.S. 1 Contemporary Art Center, which presents experimental and formally innovative work; the Noguchi museum, showcasing the work of Japanese-American sculptor Isamu Noguchi in a large, peaceful garden and galleries; and Socrates Sculpture Park. Finally, the Museum of the Moving Image is a film buff’s wonderland of film retrospectives, lectures, and other special programs.

You can’t see all of these in a day. The Noguchi Museum is especially remote, but worth the trek.

One excellent excursion is to the American Museum of the Moving Image (pictured above), which you can combine with a visit to Astoria, the center of Greek immigrant life in New York City for over 60 years. First take the R or V to the Steinway stop, at the heart of Astoria’s Greek community. Nicknamed Little Athens, this is a great place to pick up lunch before your visit. Especially convenient is S’Agapo, a well-regarded spot just two blocks from the museum.

For the Noguchi Museum: Take an N or W Queens-bound to Broadway (be careful not to get this mixed up with Manhattan version of the same avenue). On Sundays a shuttle bus leaves from the northwest corner of Park Avenue and 70th Street in Manhattan, hourly, beginning at 12:30 for $10.

For Museum of the Moving Image: Take an R or V to Steinway St, or an N or W to 36th Ave.

You can easily hit two of the Bronx’s most popular attractions, the New York Botanical Garden (a Fodor’s Choice) and the Italian section known as Arthur Avenue, in a single day.

Start on Arthur Avenue in Belmont. While Manhattan’s Little Italy is sadly overrun with mediocre restaurants aimed at tourists, this, the Little Italy of the Bronx, is a real, thriving Italian-American community. Unless you have family in the area, the main reason to go to Belmont is for the food: eating it, buying it, looking at it fondly through windows. Nearly a century after pushcarts on Arthur Avenue catered to Italian-American workers constructing the zoo and Botanical Garden, the area teems with meat markets, bakeries, and cheesemakers. There are long debates about which store or restaurant is the “best,” but thanks to generations of Italian grandmothers, vendors here wouldn’t dare offer anything less than superfresh, handmade foods.

Lunch options are obviously plentiful. One cheaper option is the Arthur Avenue Retail Market, on Arthur Ave at E. 187th, which was opened by Mayor Fiorello LaGuardia in an effort to get the pushcarts off the crowded streets. Inside you’ll find great sandwiches and pizza, barrels of olives, a butcher specializing in offal, and lots of fresh pastas. Cigars are rolled by hand right at the building’s entrance, alongside Italian gifts and kitchenware. For seated dining, try Roberto Restaurant, a stylishly casual place with long farmhouse tables, or Mario’s, the 90-year-old restaurant memorialized by Mario Puzo in The Godfather.

After lunch, head over to the New York Botanical Garden, considered one of the leading botany centers of the world. This 250-acre garden is one of the best reasons to make a trip to the Bronx. You’ll be astounded by the captivating fragrance of the Peggy Rockefeller Rose Garden’s 2,700 plants of more than 250 varieties; see intricate orchids that look like the stuff of science fiction; relax in the quiet of the forest or the calm of the Conservatory; or take a jaunt through the Everett Children’s Adventure Garden; a 12-acre, indoor-outdoor museum with a boulder maze, giant animal topiaries, and a plant discovery center. The Garden’s roses bloom in June and September, but there’s plenty to see year-round.

After the Gardens head home via Metro-North Railroad.

To Arthur Ave: Start on a B, D, or 4 train from Manhattan to the Fordham Rd station. From there, jump on a Bx12 east. Alternatively you can take the 2 or 5 to Pelham Pkway and take a Bx12 west. On weekends and holidays April to October there’s a free Bronx Tour Trolley from the West Farms Square 2/5 Station.

Just a ride away from the Big Apple is the tiny borough of Hoboken. Okay, it’s not a borough– but it might as well be. It’s actually a city, but it’s mile-square size makes it a manageable day trip from Manhattan (and a place from which countless people commute to Manhattan for work). The best way to tackle this packed city is to start Downtown (closer to the Holland Tunnel) and work your way Uptown (closer to the Lincoln tunnel) along Washington, Hoboken’s main street. Here you’ll find a plethora of one-of-a-kind boutiques, eateries, specialty shops, and of course bars.

Hoboken is known for it’s amazing Italian delis and there’s no better way to experience a true Hoboken lunch than with an Italian Hoagie from Biancamano’s (1116 Washington St. between 10th and 11th; 201/795-0274). The sandwiches are huge, so you may want to share with someone, though one bite and you may regret the decision.

Retrace your steps back to Washington and continue north. Pause a few minutes to explore the shelves at Symposia bookstore, then stop by the Hoboken Museum to learn about the history of the city, pick up some great postcards, etc. From the museum head east towards the water. You can catch a ferry back to the city at Fourteenth St. or walk back towards Downtown along the waterfront.

You’ll pass the last visage of Hoboken’s working waterfront history (think Eli Kazan’s On the Waterfront) as well as Cybil’s Cave, whose waters were once said to have magical healing powers.

Before you hop on the PATH or the ferry, step foot inside the train station’s waiting room. Built in 1907, the buildings are on the state and national register of historical buildings. Don’t miss the Tiffany ceiling; it’s said to be one of the finest examples in the country.

Via NJ Transit bus: Board the 126 bus at gate 204 in the Port Authority Building at 42nd and 8th. The fare is $2.55 (exact change or ticket). The bus stops at even streets down Hoboken’s main thoroughfare Washington Street (going from uptown to downtown).

Via NY Waterways: Ferries to Hoboken leave from the NY Waterways terminals at 39th Street, the World Financial Center, and Pier 11 near Wall St. Ferry’s go to Hoboken’s NJ Transit Terminal (downtown) and 14th Street. Times and fares vary based on departure and destination locations. Tickets must be purchased before boarding the ferry.