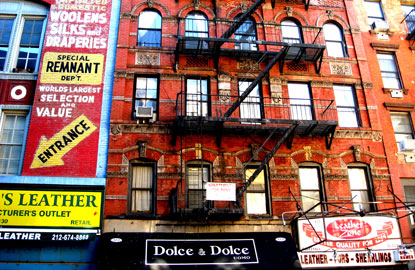 This week, Fodor’s takes you on a tour through NYC’s Lower East Side. To see other great routes through our favorite NYC neighborhoods, check out The 6 Best New York City Walking Tours Slideshow.

New York is a city of immigrants, and many arrivals between 1880 and 1920 settled on the Lower East Side, often in appallingly crowded and filthy conditions. Most of the immigrants were Jews from Eastern Europe, although Irish, German, and Italian immigrants also settled here. This was the largest Jewish community in the world in the early 20th century when almost 500,000 of the Lower East Side’s residents were Jewish. In fact, there were five times as many Jewish immigrants here during the first decade of the 20th century as there were in either Philadelphia or Chicago, the next two largest Jewish populations in the U.S. Today, most of their descendents have moved out, but traces of the old Jewish immigrant life can still be found. Start this two-mile route at the Eldridge Street Synagogue and Museum. See the interactive map below below for turn-by-turn directions. 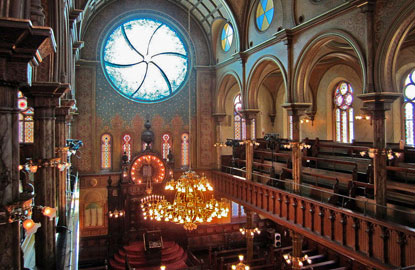 Completed in 1887, the Eldridge Street Synagogue was one of the earliest synagogues built by Eastern European Jews in the United States, and its elegance reflects the congregation’s hopes for the New World. The main rose window features twelve Stars of David, representing the twelve tribes of Israel, while the interior boasts a 70-foot-high vaulted ceiling, intricate brass fixtures and vibrantly colored stained glass. On the eastern wall, facing Jerusalem, stands the Aron Kodesh, or ark for storing the torah scrolls. This vessel dates from 1887, and is hand-carved in walnut wood and lined with red velvet. Nearly 1,000 people attended holiday services here at the turn of the twentieth century, but the synagogue declined as Jews began leaving the neighborhood in the 1920s and was finally abandoned in the ’50s. Since its restoration in 2007, the Eldridge Street Synagogue has offered weekly orthodox services and serves as a community museum of American Jewish history. 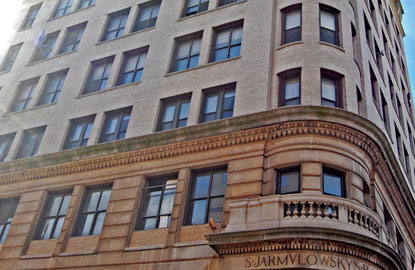 Today this building is occupied by small retail storefronts, but when the building was erected in 1912, it was home to one of the largest banks in New York. Sender Jarmulowsky was a Polish Jew who commissioned this beaux-arts building, which became the tallest on the Lower East Side when it was completed. Jarmulowsky’s bank, which operated for some 40 years before the completion of this building, catered primarily to immigrants. Later, when World War One broke out in Europe, many of the immigrants closed their accounts to send money to relatives back home, causing the bank to collapse. You can see its engraved name over the entrance on the corner at 54 Canal St. 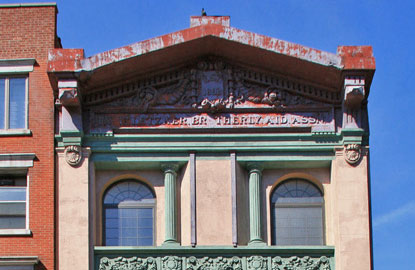 Although it’s now the Boe Fook Funeral Home, this used to be the Kletzker Brotherly Aid Association, a mutual aid society founded in 1892 by Polish immigrants from Kletz to assist new arrivals with medical care, social activities, and moral support. The mutual aid society moved into this building in 1911. Slip around the corner and cross Ludlow Street for a glimpse of the building’s side entrance (at number 5 Ludlow), where the association’s name is engraved just below the roof. One story down, you can just make out the outline of the Star of David, which was removed by the building’s current owners. 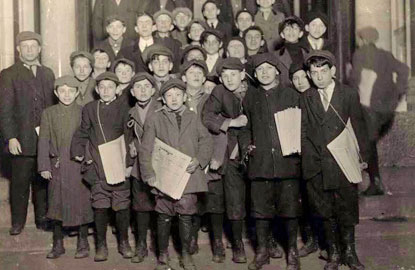 The Yiddish-language daily paper Forverts, meaning "forward," was founded in 1897 and moved into this ten-story building in 1912. There were many Yiddish papers in New York, but Forverts was the largest, with a circulation that reached 250,000 in the 1920s. The paper’s socialist leanings are signified by the carved portraits of Karl Marx, his collaborator Friedrich Engels, and the German-Jewish socialist Ferdinand Lasalle just above the second floor of the building’s facade. Note that there is also a fourth figure, whose identity is disputed. It is thought to be either Wilhem Liebknecht, an influential German socialist, and August Bebel, a German politician. The Forward Building was taken over by a Chinese church when the newspaper moved its offices uptown in 1974 and it has since been converted into condominiums.

Address: 173 East Broadway, between Essex St. and Jefferson St., across from Seward Park 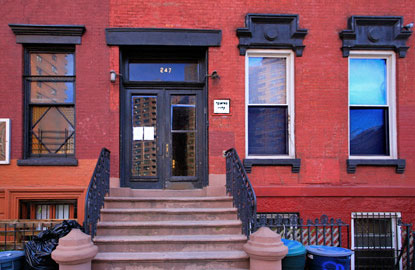 This block of East Broadway was known as "Shteibl Row," and is one of the few stretches of the Lower East Side where Jewish life is still visible. Shteibl means "little room" in Yiddish and refers to the one- and two-room synagogues that Hassidic Jews established for prayer, study, and community activities. Several of them are still in use today. Number 233 is home to the Congregation Beth Hachasidim de Polen, while the Chevra Zemach Zedek, founded in 1894, still worships at no. 241. Note also the houses at no. 247 and 249, which date from the 1830s, before the well-to do neighborhood was subject to mass immigration. 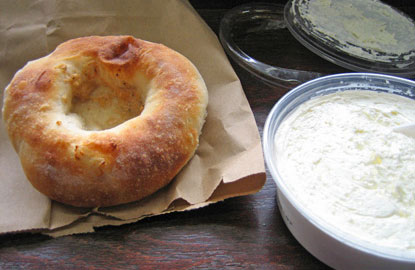 New York is famous for the bagel. Its cousin, the bialy, is less well known but delicious nonetheless. The bialy hails from the Polish town of Bialystok and was brought to New York by Jewish immigrants in the late nineteenth century. It differs from the bagel in that, instead of a hole, it has a depression that is filled in with ingredients like garlic and onion. At Kossar’s, in business since 1934, you can sample New York’s best bialys. This low-key spot is a neighborhood institution, and the oldest bialy bakery in the country. The savory treats are still made by hand, and cooked in a brick oven. Stop in and grab a few to go if you feel like a snack. 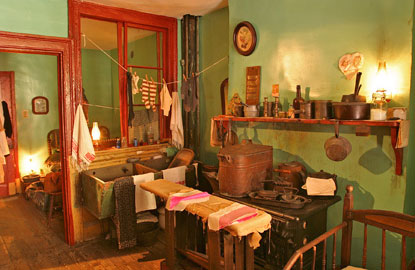 The Lower East Side Tenement Museum

The Lower East Side Tenement Museum has meticulously restored several apartments of an 1863 tenement building to capture the cramped living conditions and personal histories of the Lower East Side. These time capsules are accessible through hour-long guided tours, such as "Piecing It Together," which displays the apartment and garment workshop of two Jewish families at the turn of the twentieth century. Other tours recreate the lives of an Irish family, a Greek Sephardic family, and one that focuses on two Italian and German Jewish families who survived economic depressions. On this and the surrounding streets, most of the five- and six-story tenement buildings contained four apartments per floor, often packing several families into each apartment. Conditions were cramped and dark, as few rooms received any natural sunlight. During the day, many women worked as seamstresses in the same apartments they lived in. 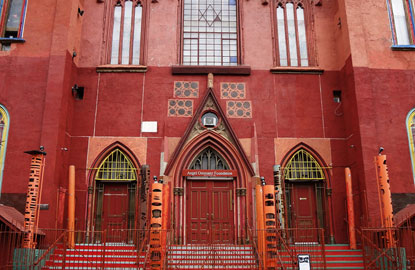 Built in 1849 by the German-Jewish Anshe Chesed congregation, this is the oldest still-standing synagogue in the city and was once one of the largest in the country, capable of accommodating 1,500 worshippers at a time. It was modeled on Cologne Cathedral, and the synagogue’s neo-Gothic doorway is practically a smaller copy of the great German cathedral’s. The synagogue was home to several congregations that moved uptown before the building was abandoned and vandalized in the 1970s. In 1986, it was restored by the Angel Orenzanz Foundation, which has converted the synagogue’s interior into an art gallery with rotating exhibits. On Saturdays, a small orthodox congregation worships in the basement. 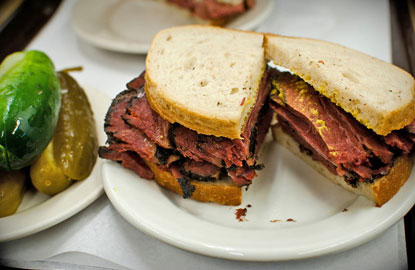 A true New York institution, Katz’s has been doling out its signature overstuffed pastrami and corned-beef sandwiches as well as hot dogs, egg-cream sodas, and kosher dill pickles since it opened its doors over 120 years ago, in 1888. Grab a ticket when you enter and make your way to the various counters to arrange your feast before taking a table amid the old-world posters and photos of celebrities, like Ben Stiller and Bill Clinton, who have dined here. If you ever saw the movie "When Harry Met Sally," you may recall Meg Ryan’s famous fake orgasm scene, which was filmed here. Another famous footnote at Katz’s is the restaurant’s "send a salami to your boy in the army" campaign, which has been going since World War Two. These days, if you prefer to send a salami to a friend, they’ll happily oblige. Just ask at the counter. 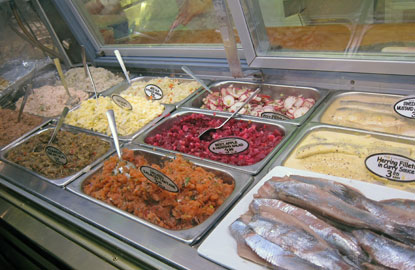 No trip to the Lower East Side is complete without an edible souvenir, and two of the oldest and finest food stores can be found along East Houston Street. Russ & Daughters, which has been at 179 E. Houston Street since 1914, serves up some of the city’s best Jewish smoked salmon, known as lox, as well as herring and caviar. Or, for New York’s best knishes, continue walking three blocks west to Yonah Schimmel’s, which began as a pushcart in the 1890s but settled at 137 E. Houston Street in 1910. Here you will find amazing knishes, which are handmade buns with sweet and savory fillings. Bon appétit—or, as they say in Yiddish, Es gezunterheyt!