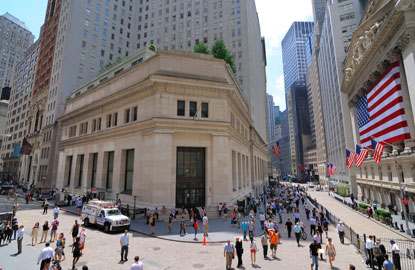 This week, Fodor’s takes you on a tour through Lower Manhattan’s Financial District. To see other great routes through our favorite NYC neighborhoods, check out The 6 Best New York City Walking Tours Slideshow.

The southern tip of Manhattan is the oldest part of New York. Here, the Dutch founded the settlement of Nieuw Amsterdam in the seventeenth century, purchasing the territory from local Indians, before surrendering it to the British in 1674. As New York expanded uptown and America became a world power, the city’s most historic district became the seat of international finance, home to Wall Street, the New York Stock Exchange, and landmark skyscrapers. Start this 1.2 mile walk at the iconic Wall Street Bull and see our interactive map below below for turn-by-turn directions. 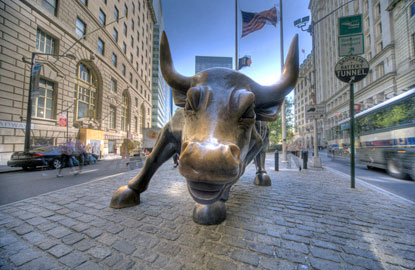 Weighing over three-and-half-tons, this bronze sculpture of a charging bull was hauled into the city on a truck in 1989 by the Italian artist Arturo di Modica and dropped off, without permission, right outside the New York Stock Exchange. The city authorities promptly removed it. But after protests from New Yorkers who wanted it back, they moved the colossal statue to its current location on Bowling Green, a small greenspace that was the first public park in New York City. The term "bull market" symbolizes a rising market, or prosperity, and the statue’s enormous bronze testicles are often rubbed by visitors for good luck. Local stockbrokers might consider following their example.

Address: Located at the northern end of Bowling Green, near the intersection of State St. and Broadway. 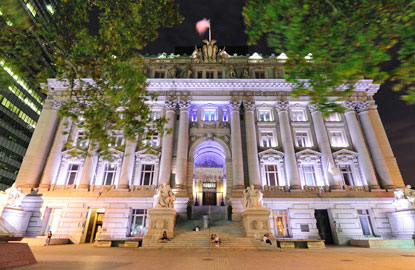 Standing on the site of Fort Amsterdam, the administrative and military headquarters of the colonial Dutch colony during the seventeenth century, the Custom House was built in 1907 by Cass Gilbert. He created one of the city’s finest beaux-arts masterpieces, highlighted by the stately two-storey portico, an interior rotunda whose skylight illuminates lavish fresco paintings, and the building’s elaborate array of sculptures. The four large marble statues atop pedestals outside the building are allegorical female figures representing the continents of Asia, America, Europe and Africa, from left to right. Asia has a small Buddha on her lap; America has a Native American warrior peering over her shoulder; Europe is draped in a cloak the style of the ancient Greeks; Africa has one elbow on a lion and one on a Sphinx. These sculptures are the work of Daniel Chester French, who made the Lincoln Memorial statue in Washington D.C. These days, the first two floors of the Custom House are used by the National Museum of the American Indian. The museum is highly regarded for its collection of crafts, woodcarvings, and basketry, and admission is free. 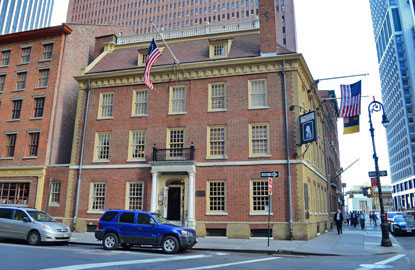 This is best known as the site where George Washington held a victory banquet and bid farewell to his officers in 1783, after the British had been defeated. The building was originally constructed as an elegant home in 1719, and was converted into a tavern by Samuel Fraunces in 1762. Fraunces Tavern became one of New York’s most important—and lively—gathering places during the Revolutionary War. When Fraunces sold the tavern in 1785, the U.S. Government became a tenant, turning building into an office that housed the Department of Foreign Affairs and Department of Treasury, among others. The building was later purchased, renovated, and converted into a museum in the early 1900s by the Sons of the Revolution, a society for the remembrance of Revolutionary War patriots. The museum houses 18th-century American memorabilia including historical flags and military artifacts, as well as period recreations of the government offices and tavern rooms that existed here. 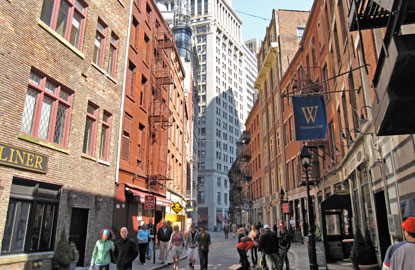 Although the Great Fire of 1835 destroyed what was left of lower Manhattan’s colonial architecture, the Stone Street Historic District attempts to recapture and preserve the winding, cobblestone streets and low brick houses of that period. The narrow cobblestone alley was created by the Dutch in the 1600s, and called Hoogh Straet, meaning High Street. The Dutch West India Company sold this area to European owners in the 1640s. Later, under British rule, the street was called Duke St., in honor of the Duke of York. After the fall of British power in 1783, New Yorkers renamed the alley Stone Street for its cobbled paving stones. In the 1800s, because of its proximity to the East River, the Stone Street district was an important commercial corridor for maritime businesses. The area, and Stone Street in particular, fell into disrepair in the early 20th century. Fortunately, a streetscape renovation was completed in 1996 and the area was declared a landmark historic district. Today, the pedestrian-only Stone Street is a vibrant meeting place filled with Wall Streeters blowing off steam and celebrating the day’s deals at its bars and restaurants. 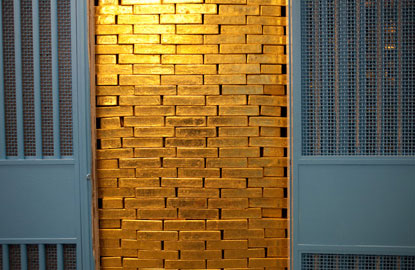 A fortress with the look of a neo-renaissance palace, the Federal Reserve Bank, built in 1924, occupies an entire wedge-shaped block. But it’s not what you see from the street that makes this building important—it’s the gigantic vaults five stories below ground that hold the world’s largest gold reserves. These are worth about $100 billion, or roughly a quarter of the planet’s supply. The gold belongs to nearly forty different nations, and moves from country to country to settle economic agreements without ever leaving the building. Tours of the vaults are available, but you have to book about a month in advance. 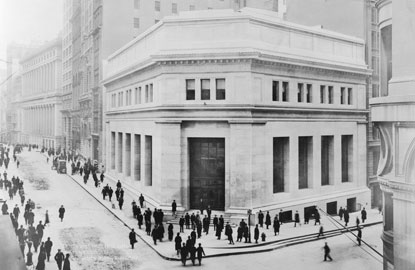 The austere, marble-clad edifice at the corner of Wall and Broad streets was commissioned by the financier J.P. Morgan, although he died a year before it was completed in 1914. The headquarters of J.P. Morgan & Co. was so well known as the "House of Morgan" or "the Corner" that the actual name of the investment bank was never marked on its façade. At noon on September 16, 1920, a bomb exploded outside the building killing nearly forty people and injuring hundreds. The perpetrators, believed to be anarchists, were never caught, and you can still see pitting from the bomb on the building’s façade. Today, the building is linked to its neighbor as part of a luxury condominium development whose interior design was overseen by Philippe Starck, a French designer best known for the sleek hotel interiors at Miami‘s Delano Hotel and New York’s Hudson Hotel. The roof of this five-story building is a garden and pool for condominium residents. 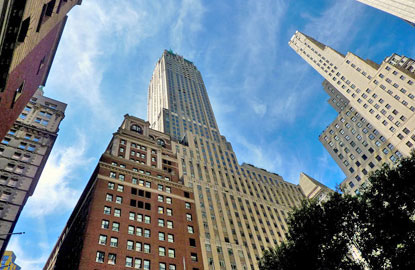 Many Manhattan skyscrapers have staked claims to the title of the world’s tallest building, but the seventy-story Bank of Manhattan Trust Building’s reign was undoubtedly the briefest, lasting only one month. When work began on the project in 1928, its builders knew that the Chrysler Building in Midtown was also racing to construct the world’s tallest building, so they altered their plans to add more floors, raising the roof to a record-breaking 927 feet. The Bank of Manhattan Trust building was declared the world’s tallest when it was finished in April 1930. However, when the Chrysler Building was completed a month later, the architects unveiled their secret weapon at the last minute—a 125-foot steel spire that knocked the Bank of Manhattan Trust Building from its throne. In any case, both buildings were surpassed when the Empire State Building was completed the following year. Donald Trump acquired 40 Wall Street in 1995, and renovated the lobby with Italian marble and bronze. It is used for commercial offices. 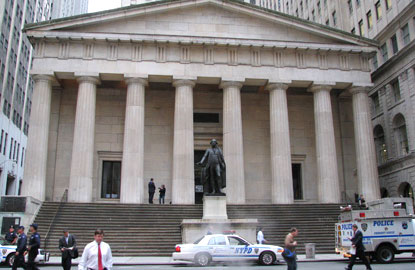 One of the finest examples of Greek Revival architecture in New York, the Federal Hall National Memorial was built in 1842 on the site of the original Federal Hall. The first building, built in 1700 and torn down in 1812, served as America’s first capitol and was the stage of several major scenes in American history. George Washington was sworn in as president on the steps in front of you on April 30, 1789, and the Bill of Rights was adopted here in September of that year. Today, the hall contains a small museum commemorating the building’s history. Outside, John Quincy Adams Ward’s famous bronze statue of Washington from 1882 stands exactly where the first president would have taken his oath. Step around to the north of the building, where you’ll find a bas relief sculpture of George Washington praying at Valley Forge. 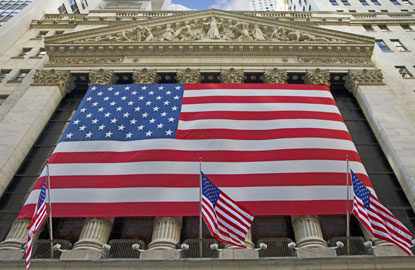 The largest stock exchange in the world, the New York Stock Exchange had its humble beginnings in 1792 when twenty-four ambitious brokers established trading ground rules beneath a buttonwood tree on Wall Street. Now the street is paved, and the trading takes place inside the stock exchange’s neo-classical masterpiece, built in 1903 and designed by George B. Post. The Broad Street façade is celebrated for its grandiose pediment, a marble sculpture by John Quincy Adams Ward titled "Integrity Protecting the Works of Man," which looms above six enormous Corinthian capitals. Due to security concerns, tours are no longer allowed. But the action on the trading floor never stops, with shares of some $100 billion changing hands daily. 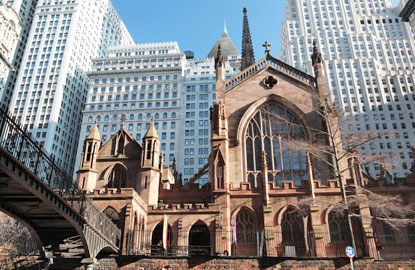 It’s hard to imagine now, but Trinity Church was actually the tallest building in Manhattan up until 1890, thanks to its 279-foot spire. What you see today is actually the third version of the church—the first, built in 1698, was destroyed by fire and the second was torn down in 1839 after storms damaged the structure. The current Gothic Revival edition was designed by architect Richard Upjohn and completed in 1846. Note the heavy bronze doors: these were designed by Richard Morris Hunt, who is famous for designing the Statue of Liberty‘s pedestal. Be sure to check out the adjacent Trinity Churchyard, where many luminaries are buried, including the first secretary of the treasury Alexander Hamilton, inventor of the steamboat Robert Fulton, and famous financier John Jacob Astor.

Address: 74 Trinity Pl., entrance at Broadway and the head of Wall St.