News Apeksha Bhateja What Are the Chances You'll Get Monkeypox at a Hotel?
NewsNew York City Walking Tour: A Taste of Chinatown 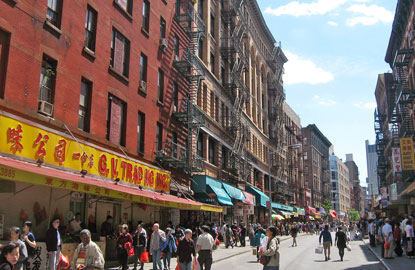 This week, Fodor’s takes you on a tour for all your senses through NYC’s Chinatown. To see other great routes through our favorite NYC neighborhoods, check out The 6 Best New York City Walking Tours Slideshow.

Unlike the Chinatowns of many other cities, which seem to exist largely for the benefit of tourists, Manhattan’s Chinatown is a living, breathing neighborhood. In fact, this pocket of downtown Manhattan is like a vibrant mini-city unto itself, complete with its own newspapers, hundreds of restaurants, and around 100,000 residents. Beyond the tasty restaurants, there are colorful galleries and hidden temples, curio shops, and an excellent museum. Though it can overwhelm with its density, don’t be afraid to wander down a random side street in order to steal glimpses of everyday life and time-honored customs. Though it might appear seedy, the neighborhood is generally very safe. And remember, Chinatown is best explored with an open mind and an empty stomach. Start this one mile walk at MOCA on Centre Street. See the interactive map below for turn-by-turn directions. 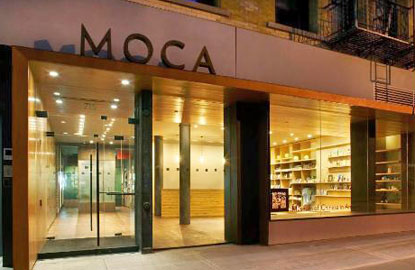 The Museum of Chinese in America (MOCA)

The Museum of Chinese in America offers an ideal introduction to Chinatown. The inviting space, which features soaring ceilings and exposed brick, was designed by famed architect Maya Lin, whose best-known work is the Vietnam Veterans Memorial in Washington DC. The museum’s multimedia exhibits chart the history of Chinese immigration in the U.S. as well as the growth and evolution of Chinese communities in cities across the country. Note that the museum is closed on Tuesday and Wednesdays and admission is free on Thursdays. The rest of the time entrance costs $7 for adults, and $4 for seniors and students. Admission is free for kids under eight. A gift shop with fun cards, t-shirts, and books is a good place to poke around for souvenirs even if you don’t have time to explore the rest of the museum. 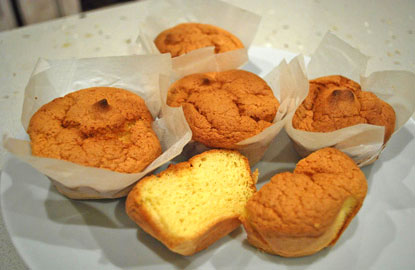 For a quick post-museum pick-me-up, pop into the Kam Hing Coffee Shop, a narrow storefront on Baxter St. Locals make the pilgrimage here for one reason and one reason only: Perfectly fluffy, freshly made Chinese sponge cakes. This gently sweet treat, which pops up in Asian supermarkets and bakeries, is steamed instead of baked and it’s lighter than its American counterpart. At 70 cents apiece, plan on picking up one or two little cakes per person. There’s nowhere to sit down in the bakery so eat this snack on the go. 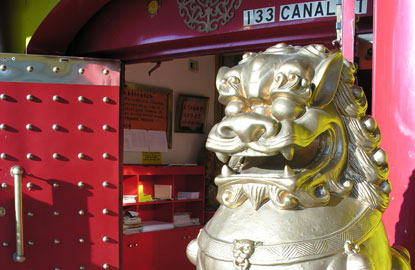 Just past the entrance to the majestic Manhattan Bridge lies the largest Buddhist temple in Chinatown, marked by two regal lions out front. This space wasn’t always so sacred: Before its transformation in 1996, this temple was the site of the Rosemary Theater, which screened adult films. But now, the tranquil hush inside the temple offers immediate respite to worshippers and visitors alike. Drop $1 in a donation box and grab a rolled-up, rubber-banded fortune, then proceed to the temple’s main chamber. In this grand room, you’ll see the awe-inspiring sight of a 16-foot tall golden Buddha. Resting on a lotus flower, the statue sports a glowing blue halo around his head. Take a moment to read your fortune and reflect.

Address: 133 Canal St., between Chrystie St. and the Bowery 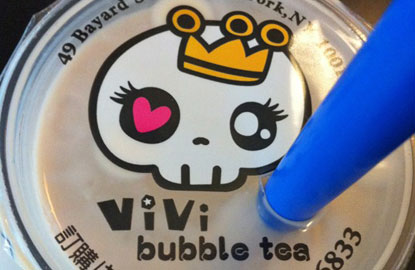 The upbeat Vivi Bubble Tea sells its namesake beverage in flavors ranging from kumquat-lemon and champagne-grape to more traditional blends like red bean and taro. For the uninitiated, bubble tea is a sweet Taiwanese drink that blends tea, milk, and fruit with small balls made of jelly or tapioca. These tasty tidbits are slurped up through a wide straw. The drink originated in Taiwan in the 1980s and eventually spread throughout East Asia. It hopped overseas to Canada and by the early 2000s surfaced in the U.S., especially on the West Coast. Some people have compared the fad to the spread of juice bars in the 1990s. Either way, it’s a trend that’s long since proved its staying power in New York’s Chinatown.

Address: 49 Bayard St., between Elizabeth St. and the Bowery 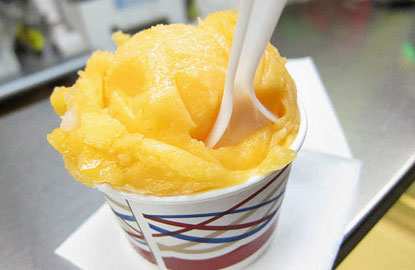 The Chinatown Ice Cream Factory offers a more familiar treat albeit in some unusual flavors. All the ice cream is made on-site and the cheerful employees will gladly hand out samples so you can try flavors like avocado, black sesame, wasabi, and pandan leaf before committing to a full scoop. The place is family-owned—you’ll likely see one or both of the Seid daughters, Christina and Katherine behind the counter—and it has been a neighborhood fixture since 1978. If you can’t decide on a flavor, go with the local-favorite "zen butter," a creamy combination of peanut butter and sesame seed ice creams. 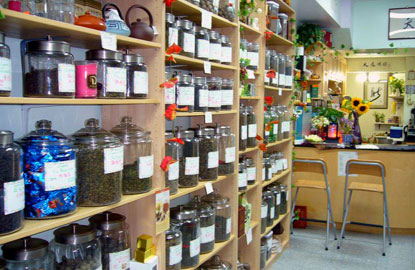 Just walking into this pocket-sized herb and tea shop makes you feel healthier. A relatively new addition to the neighborhood that opened in 2010, the store carries over 200 varieties of organic tea and over 100 kinds of herbs, including Ayurvedic herbs, whose benefits are all helpfully printed in English. Better yet, consult the store’s owner Lorna Kwan, who hails from Hong Kong but has lived in New York for over three decades. Eighteen years ago she became a certified qigong teacher, which is a form of Chinese medicine that combines breathing techniques, meditation, and different movements to improve mental and physical health. After discussing a customer’s emotional or health needs, Kwan will recommend certain tea and herb combinations. Of course, the teas are also just plain tasty for sipping. Kwan’s personal favorites are Tie Kwun Yin, an oolong variety, and a jasmine and rose green tea. She also makes organic bubble tea, which is hard to come by in Chinatown or elsewhere. 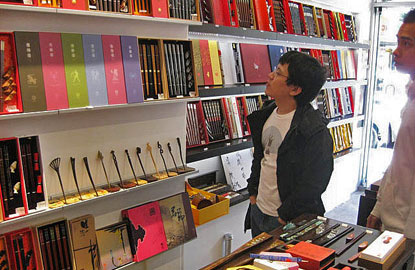 As you may have guessed, this store specializes in one thing, displaying some 200 varieties of chopsticks like they were pieces of jewelry. The Beijing-based company has over 50 outposts in China. In fact, the company produced the official chopsticks set for the 2008 summer Olympics in Beijing. This location opened as their first and only U.S. boutique in November 2008. Each pair for sale has its own story and meaning. For example, pairs imprinted with fish bring good luck while cranes and turtles symbolize longevity. Other chopstick sets are inlaid with shells or printed with famous Mao quotes or Chinese paintings. The Chinese word for "chopsticks" sounds similar to the word for "happiness," so chopstick sets are a popular gift for housewarmings, weddings, and birthdays. The materials range from bamboo and sandalwood to ox bone and silver. Accordingly, prices start around $2 per pair and go up from there. Some pairs made of ebony, mahogany, and silver sell for up to $600 a pair. 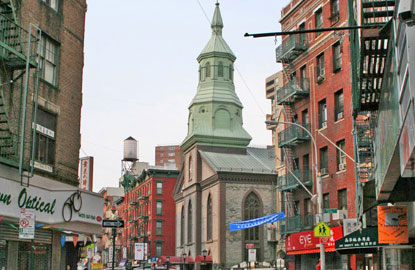 Church of the Transfiguration

It’s impossible not to notice the Church of the Transfiguration looming large. Not only is big, but its Georgian architecture and Gothic details stand out in this neighborhood. The evolution of the area is mirrored in its multilayered history. Begun by Dutch Lutherans way back in 1801, the church’s parishioners eventually changed to primarily Irish worshippers followed by Italian immigrants. Today that demographic has changed again, as this church claims the largest Chinese Roman Catholic congregation in the United States. Still in possession of a diverse mix of attendants, Mass is recited in Cantonese, English, and Mandarin every Sunday. 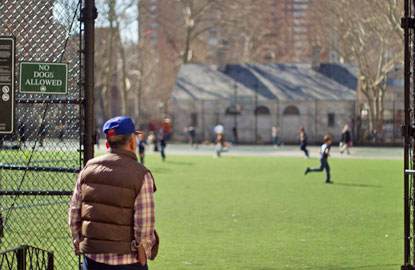 Two hundred years ago, this area was a dangerous, red-light district overrun by fierce rival Irish gangs with names like Roach Guards, Dead Rabbits, and Bowery Boys. At the park’s south end is a particularly notorious area once known as Five Points, whose violent past was immortalized in the film Gangs of New York. Today the scene is just the opposite. Created by the co-designer of Central Park, Calvert Faux, the small but pleasant Columbus Park offers the neighborhood’s only area of open green space. At the north end, elderly people engage in games of Chinese chess and checkers and trade gossip while enjoying nice weather. Parallel to Bayard Street is an open-air concert pavilion built in the 19th century. Today members of the community use this area to practice their slow-motion, graceful tai chi in the morning and it also plays host to cultural events. Note that if you are in need, beneath the pavilion is one of Chinatown’s few public restrooms and it’s usually quite clean and presentable.

Address: 67 Mulberry St., between Worth St. and Bayard St. 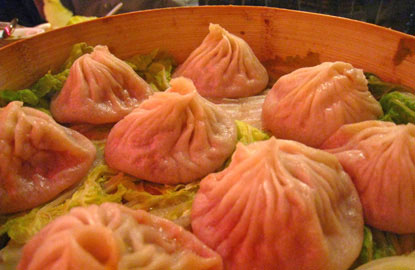 End your sojourn with a meal at the beloved neighborhood institution Joe’s Shanghai. A favorite of both locals and critics, you can expect to wait for a table on weekend nights. The Shanghai-style cuisine is delicious across the board, though there is one standout item for which the restaurant is famous, and that is the soup dumpling. These soft little pouches are made fresh to-order and come filled with either succulent pork, or crab and pork, and a piping hot broth. Order these as soon as you sit down to avoid a long wait. The secret to eating them is to scoop one onto a spoon, then make a tear into the wonton wrapper and suck out the juice before eating the rich filling. Be sure to spoon a little black vinegar and ginger—the traditional accompaniment—onto your spoon before taking a bite. And be careful—they’re hot!

Address: 9 Pell St., between the Bowery and Mott St.