Coronavirus David Silverberg Are Your Kids Heading Back to Summer Camp? Here's What You Need to Know
Home  >  News   >   New York City for Walkers: Wall Street, Greenwich Village, and Midtown

New York City is a treasure of neighborhoods and history, and a visit to this glorious city is never quite as simple as a quick look at a few landmarks. These half-day itineraries are mix and match: follow the ones that intrigue you—and leave yourself time to walk and explore or grab a bite.

The Financial District: Show Me the Money 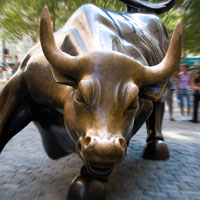 Start out at sculptor Arturo Di Modica icon of Wallstreet, his bronze Charging Bull statue. Ask New Yorkers who don’t frequent the downtown area where the statue is and they’ll usually tell you it’s somewhere on Wall Street near the stock exchange. But the statue actually resides in Bowling Green, where it was moved after police complained it was blocking traffic in its original location. Since the city never commissioned it, the bull is still officially dubbed a “temporary installation.”

After you pose for snapshots with the bull, head northeast to Wall Street, one of the most famous thoroughfares in the world. The epicenter of Wall Street is—you guessed it—the New York Stock Exchange, at the intersection of Wall and Broad streets. The stock exchange traces its beginnings back to a group of brokers who, in 1792, shortly after Alexander Hamilton issued the first bonds in an attempt to raise money to cover Revolution-caused debt, were in the habit of meeting under a buttonwood tree that once grew on Wall Street. The exchange itself isn’t open to visitors, but there is a related museum at the Federal Hall National Memorial.

Look at the facade of 23 Wall Street, just across from the exchange. The deep pockmarks and craters were created on September 16, 1920, when, at noon, a horse-drawn wagon packed with explosives detonated in front of the building, killing 33 people and injuring 400. Those responsible were never apprehended and no one ever claimed credit for what was the worst terrorist attack on American soil until the Oklahoma City bombing and later 9/11.

Marking Wall Street’s far west end is Trinity Church, whose parish was founded by King William III of England in 1697. Trinity’s burial ground serves as a resting place for a half-dozen notables, including Alexander Hamilton. 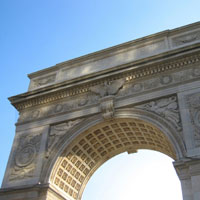 At Washington Square Park the city’s central business artery, 5th Avenue, ends, and the student-bohemian feel of the Village begins. Circle the recently spruced-up open square, but don’t expect to find a bench or fountain-side seat not occupied by New York University students, professors, pigeon-feeders, or idlers of all sorts. On the park’s north side is the grand Washington Memorial Arch, which looks upon the Row, two blocks of lovingly preserved Greek Revival and Federal-style town houses.

Residences are sometimes tucked away in little enclaves in the Village. Washington Mews and MacDougal Alley are two cobblestone private streets just above the park. Grove Court, a cluster of brick-front homes, seems like a precursor to today’s gated communities. West of 6th Avenue on 10th Street is the wrought-iron gateway to a tiny courtyard called Patchin Place. Around the corner is another alley filled with homes, Milligan Place.

The beautiful blocks of 19th-century redbrick town houses that predominate in the Village are occasionally marked by attempts at nonconformity. At 18 West 11th Street sits a home with a modern, angled bay window, a building erected to replace the town house inadvertently blown up by the antiwar group the Weathermen in 1970. The triangle formed by West 10th Street, 6th Avenue, and Greenwich Avenue originally held a market, a jail, and the magnificent towered courthouse that is now the Jefferson Market Library. Where Christopher Street crosses Waverly Place is the triangular 1831 brick Northern Dispensary building. 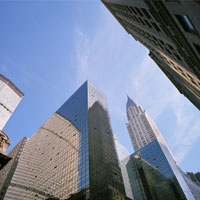 Soaring skyscrapers frame an architectural playground, a mind-boggling patchwork of styles spanning two centuries that coalesce into one of the world’s great urban landscapes. No painting or sculpture compares with the artistic beauty of Midtown itself. Modern glass towers coexist with 19th-century limestone mansions; pocket-size parks and peaceful plazas provide sanctuary amid steel towers that climb high into the clouds.

Art Deco is perhaps Midtown’s most distinctive style. Its principles of symmetry and geometric angularity, coupled with Machine Age materials steel and aluminum, governed such mega-achievements of the 1920s and ’30s as the Chrysler Building (considered one of the great Art Deco masterpieces) and Rockefeller Center, and decorated such Jazz Age landmarks as the Waldorf Astoria Hotel and Beekman Tower, all located in the 40s east of 6th Avenue. Should you be continuing up 6th, you’ll hit a landmark piece of Art Deco architecture, Radio City Music Hall, with its distinctive pink-and-blue neon sign. If you’re continuing downtown, get a taste of Greco-Roman 20th-century neoclassicism and walk along East 42nd Street to the Beaux-Arts masterpieces Grand Central Terminal and nearby New York Public Library, two brilliantly designed public spaces as beautiful as they are functional.

A great place to see the coexistence of New York’s old and new is on Park Avenue, where the Byzantine dome of St. Bartholomew’s Church reclines two blocks south of the bronze-and-glass Seagram Building, designed by modernist innovator Mies van der Rohe. For an even sharper contrast, try to glimpse two remaining 19th-century mansions (at No. 9–11 and No. 13–15 West 54th Street) from the upper levels of the Museum of Modern Art; in fact, all of the museum’s cleverly placed windows frame similar juxtapositions of urban settings.

Moving north, relive the 1980s at the dark-glass Trump Tower (E725 5th Ave., at E. 56th St.). Its ostentatious atrium flaunts that decade’s unbridled luxury, with expensive boutiques and gaudy brass everywhere. The “Donald” resides above in a penthouse (with an elevator that famously descends from his bedroom to his office), and the famous boardroom from the TV show The Apprentice is also above. Step into the ’90s at the flagship Louis Vuitton–Moët Hennessy Tower, an arced glass skyscraper that’s both conspicuous and elegant, just like the handbags sold by the resident French luxury-goods giant. Finally, return to the 21st century with the glitzy display that is Times Square: its blend of culture and consumerism, architecture and advertising, makes it a glittering high-tech lasso looping in gawking tourists and theatergoers into one giant bottlenecked bundle.