What does it mean for travelers to New York? It’s a fine-dining free-for-all, with top restaurants offering unprecedented bargains. Here are our current picks for the city’s best upscale dining deals.

Chef Thomas Keller’s exquisite dishes at Per Se in Columbus Circle used to require a commitment of four hours and $275 for the tasting menu. And that’s only if you could get a reservation, as the restaurant was regularly booked two months out. Now, diners can stop in at their leisure for a $24 cheese plate or $12 dessert—gratuity included—from the new à la carte menu, available in the cocktail lounge overlooking Central Park. And if you do want to splurge, you can likely get a reservation for the following week.

Nearby, at the southeastern corner of Central Park, The Plaza Hotel’s recently reintroduced Oak Room has stripped away its tablecloths, brought in the talented chef Eric Hara, and rolled prices back a decade. With entrees like the $24 sea urchin risotto and $29 pan-seared cod—plus complimentary pre-meal amuse bouche and post-dinner petit fours—the experience is a real steal. 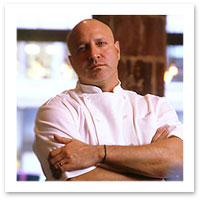 Downtown, Top Chef judge Tom Colicchio has cleverly established new bargain concepts at his famous formal restaurants. The front room of Craftsteak has been transformed into Halfsteak, with menu items—like a “halfsteak” with fries—topping out at $14. Try the soft-shell crab sandwich and Merguez sausage plate, but skip the miniscule sliders. After dinner meal, they send you off with complimentary coffeecake for breakfast the next day (it also makes a stellar dessert if you’ve still got room).

Across town, Craft’s private event space, next-door to the flagship restaurant, is now DFF, a seasonal American concept where everything on the menu is $10 or under. The assortment of dishes changes often, but if they have it, try the chicken liver paté with Washington cherries, and the bacon pizza with Taleggio cheese and caramelized onions. Excellent wines by the glass range from $7 to $10 apiece, and cocktails top out at $9.

The best part of this New York dining trend? The formerly snooty maitre’d will greet you like an old friend, making you feel like a New York insider. Next time, he might even remember your name.