News Ronny Maye Should You Cancel Your Vacation to an Area Impacted by a Natural Disaster?
NewsWalk the Rota Vicentina in Portugal’s Algarve 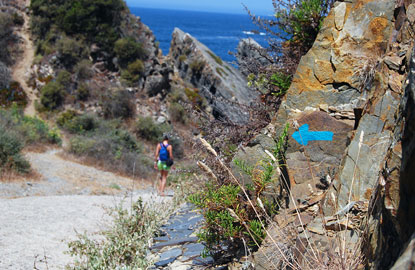 Europe has no shortage of walking paths; indeed its cities and countryside are often best explored on foot. Keeping to an organized and well-maintained path, however, can help you make the most of your time while seeing the region’s highlights, getting to know a place, and, um, prevent you from getting lost. Now you can get to know Portugal‘s wild Alentejo and Algarve regions really, really well.

Now officially open to the public, the Rota Vicentina offers more than 340 kilometers of walking, hiking, biking, and horseback riding trails along the largely undeveloped southwest coast of Portugal. Running from Santiago do Cacém in the north to Cabo de San Vicente in the south, the trail takes visitors along protected natural areas in the Algarve (60 percent of which is protected in large tracts of Natural Parks) for endless staggering coastal views and rural towns.

Set up in the tradition of the European Grande Randonée, trails are broken up into 13 chunks no longer than 25 kilometers (about 15.5 miles), allowing walkers to break their tour into doable day hikes or bikes. Lodging is of the camping variety or small hotels in towns along the way.

The trail takes visitors along (and sometimes on) beaches, streams, through groves of cork oak trees, alders, and ash, rural farms, and fishing villages. At times the walk can be quite demanding, according to the project’s website, traversing mountainous areas farther inland, though if the photos posted to the project’s Flickr account are any indication, the huffing and puffing is worth the reward—spectacular views over the countryside all the way out to the ocean.

Along the way, the 241 km Historical Trail connects to a second system of foot paths called the Fishermen’s Trail, which takes walkers along coast-hugging cliffs in four linear and five circuit trails.

The trail has been integrated with the GR11, a European mega-trail that runs through the Spanish Pyrenees, itself a part of the larger Grande Randonée footpath system that traverses several European nations. According to an article posted on BreakingTravelNews.com, the Rota Vicentina can be completed in 14 days walking, five days biking, or nine days on horseback. Go off trail with surfing lessons, mountain biking tours, and more from outfitters like Algarve Adventure, located in Vale da Telha.

The Rota Vicentina was developed by the non-profit tourism organization Casas Brancas, which focuses on sustainable tourism in the Algarve and along the Alentejo coast, the Almargem Association and other groups.