At just about every turn in the Land of Enchantment, whether you’re high in the mountains or low in a dramatic river canyon, hiking opportunities abound. Six national forests cover many thousands of acres around New Mexico, as do 34 state parks and a number of other national and state monuments and recreation areas. The ski areas make for great mountaineering during the warmer months, and the state’s many Native American ruins are also laced with trails.

Hiking is a year-round activity in New Mexico, as you can virtually always find temperate weather somewhere in the state. Consider the following areas for an engaging ramble. 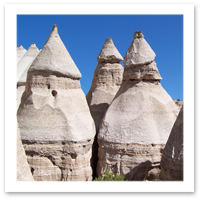 About midway between Santa Fe and Albuquerque, Kasha-Katuwe Tent Rocks National Monument is so named because its bizarre rock formations look like tepees rising over a narrow box canyon. The hike here is relatively short and only moderately challenging, offering plenty of bang for the buck.

Located 45 minutes south of Santa Fe, near Cochiti Pueblo, Tent Rocks offers excellent hiking year-round, although it can get hot in summer, when you should bring extra water. The drive to this magical landscape is equally awesome, as the road heads west toward Cochiti Dam and through the cottonwood groves around the pueblo. It’s a good hike for kids. The round-trip hiking distance is only 2 mi, about 1.5 hours, but it’s the kind of place where you’ll want to hang out for a while. Take a camera. There are no facilities here, just a small parking area with a posted trail map and a self-pay admission box; you can get gas and pick up picnic supplies and bottled water at Cochiti Lake Convenience Store.

One of the more strenuous hiking challenges in the state is Wheeler Peak. The 8-mi trek to New Mexico’s highest point (elevation 13,161 feet) rewards visitors with stunning views of the Taos Ski Valley.

The 8-mi trail to the top begins at the Village of Taos Ski Valley. Only experienced hikers should tackle this strenuous trail. Dress warmly even in summer, take plenty of water and food, and pay attention to all warnings and instructions distributed by the forest rangers. Quite a few shorter and less taxing trails also depart from the ski valley and points nearby; trailheads are usually marked with signs.

From the northeastern fringes of Albuquerque, La Luz Trail winds 9 mi (with an elevation gain of more than 3,000 feet) to Sandia Crest.

At the 10,378-foot summit, explore the foot trails along the rim (particularly in summer) and take in the breathtaking views of Albuquerque down below, and of the so-called Steel Forest—the nearby cluster of radio and television towers. Always bring an extra layer of clothing, even in summer—the temperature at the crest can be anywhere from 15 to 25 degrees cooler than down in Albuquerque.