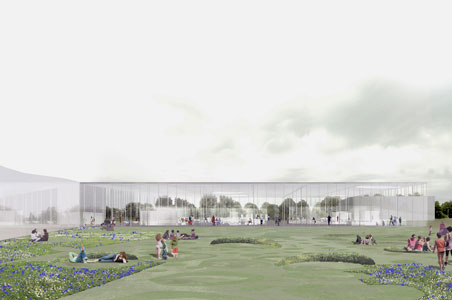 The new $195-million satellite of Paris‘ famous Louvre Museum has opened in Lens, a former coal mining town in Northern France close to the Belgian border. The Louvre-Lens, as it is being called, will contain 300 masterpieces from Paris’ Louvre collection, displaying art from each period and style. The museum, which is expected to receive as many as 500,000 visitors annually, will have no permanent collection; rather it will rotate works from the Paris collection with annual summer and a winter exhibitions.

Designed by Tokyo architects Kazuyo Sejima and Ryue Nishizawa with the New York architecture firm Imrey-Culbert and Parisian landscape architect Catherine Mosbach, the Louvre-Lens encompasses four rectangular buildings around a central square building, much like the Louvre in Paris. The innermost square building is a transparent glass pavilion and also serves as the main entrance to the museum.

At the heart of the Louvre-Lens and intrinsic to its founding is the notion that the Louvre in Paris might do well to experiment with different types of displays. Since several of the works in Paris’ Louvre are divided into distinct departments which were established centuries ago, it was thought that a branch should be created outside of Paris which would try an assortment of exhibition styles and open the collection to a broader range of visitors.

Exhibit-wise, the new museum is broken down loosely into three sections: Antiquity, Middle Ages, and Modern Times. Approximately 20 percent of the Paris collection will rotate annually with works from the core collection—including Da Vinci’s Saint Anne exhibit and Ingres’ famous portrait, Louis-Francois Bertin—traveling to the new location. (Alas, the Mona Lisa will stay put in Paris.) The Louvre-Lens is also unique in that its restoration rooms will be visible and open to the public, giving visitors an insider’s, behind-the-scenes view of the museum. 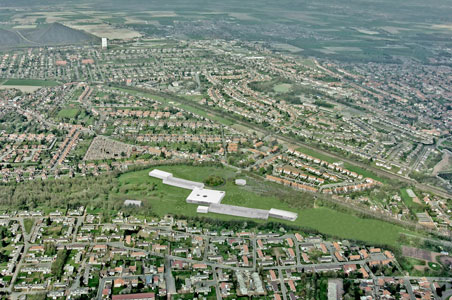 In 2003, Jean-Jacques Aillagon, then Minister for Culture and Communication, and Henri Loyrette, president of the Louvre in Paris, announced plans to create a regional branch of the Louvre. Shortly thereafter, in November 2004, Lens was named over five French cities vying for the museum as the winning city in large part for its geographical location—just two hours by car from Paris and 1.5 hours from Brussels. It is also along a TGV line, so just an hour and ten minutes from Paris by high-speed train.

However, beyond being convenient for tourists, the choice of Lens for the new Louvre branch is thought to be, in many ways, symbolic. The decision to build the new museum in a former coal yard is meant to serve as a vehicle for France to express its gratitude to a region of the country that has suffered throughout history, both from war and from the harsh effects of coal-mining (Lens’ last coal-mining pit closed in 1986.) Economic and social conditions in Lens remain difficult, with a higher-than-average unemployment rate. And so, following in the footsteps of Britain’s Tate in Liverpool and Spain’s’ Guggenheim in Bilbao, the new Louvre-Lens comes upon the scene, helping to propel this once-thriving French coal-mining hub into the 21st century. Who knows, maybe Mona Lisa will pay a visit after all.

Photo credits: Courtesy of the French Tourist Board