New Haven, most commonly known for its Ivy League citizens, has been on pizza-lovers’ radar for decades (if quietly so) as a destination rivaling the best of the big cities. Apizza (pronounced “ah-beetz” by locals) is defined by its thin, chewy crust, which makes for a unique—and some would argue, superior—pizza experience. From white clam pies to mashed potato-topped concoctions, here are our picks for the best pizzas in the area. 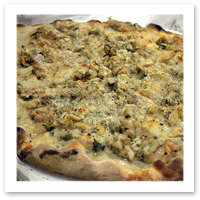 This is where it all began. Frank Pepe opened this eponymously-named pizza place in 1925, creating what would soon be known as the iconic New Haven-style pizza. Eager customers line up for hours to get a taste of the famous thin-crust pies, in particular Pepe’s pièce de résistance— the white clam pizza. This masterful creation, consisting of olive oil, garlic, oregano, grated parmesan cheese, and little-neck clams atop a thin crust is what has been drawing crowds for decades. Read the full Fodor’s review here for more info.

Just two blocks from Frank Pepe’s on Wooster Street (considered to be New Haven’s Little Italy) is Sally’s Apizza, a longstanding rival of Frank Pepe’s ever since Salvatore Consiglio, Pepe’s nephew, decided to break away from his relatives and open his own pizzeria in 1938. The result of this family-feud is two competing pizzerias and a divided city: those who believe Frank Pepe’s serves the best pizza in New Haven, and those who are devoted to Sally’s. If you want to decide for yourself and taste the pizza at both places, make sure to head to Frank Pepe’s first. Sally’s doesn’t open until 5 pm, Tuesday through Sunday.

It’s not what Modern Apizza has that sets it apart from the rest, but rather what it doesn’t have: toppings. The pizzeria’s signature “plain” pie is a thin crust with a layer of tomato sauce and just a sprinkling of parmesan cheese. If you want mootz (mozzarella in New Haven-speak) then you have to ask for it. But why mess with a classic? Modern Apizza has been serving their signature “plain” pies since 1934 and business is still booming. Although “plain” pies are served throughout New Haven, Modern Apizza does them best.

It doesn’t surprise us that BAR, a nightclub-cum-microbrewery, is located in a college town and that their signature pie just happens to be bacon and mashed potato topped-pizza—a college student’s comfort-food dream. Unlike Frank Pepe’s, Sally’s, and Modern, which are all deeply intertwined in the history of New Haven pizza, BAR is the newcomer to the group, giving these traditional old-timers a run for their money. If you want to taste what this place does best then push aside any creeping thoughts of carbs and calories and go for the masterpiece: a slightly-charred, crispy crusted pizza, topped with a thin layer of creamy mashed potatoes and bits of bacon. And yes, if you were wondering, it does taste as good as it sounds.