Coronavirus David Silverberg Are Your Kids Heading Back to Summer Camp? Here's What You Need to Know
Home  >  News   >   New England’s 6 Best Beaches 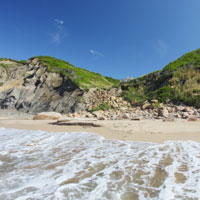 Long, wide beaches edge the New England coast from southern Maine to southern Connecticut, with dozens dotting the shores of Cape Cod, Martha’s Vineyard, and Nantucket. The waters are at their warmest in August, though they’re cold even at the height of summer along much of Maine. Inland, small lake beaches abound, most notably in New Hampshire and Vermont. Though most hit these sandy getaways in summer, beaches can even be enjoyable in winter (for a stroll, not swim), as you’ll likely have the shore to yourself.

Many of the beaches have lifeguards on duty in season; some have picnic facilities, restrooms, changing facilities, and concession stands. Depending on the locale, you may need a parking sticker to use the lot.

Twelve miles off Rhode Island’s coast, this 11-square-mi island has 12 mi of shoreline, 365 freshwater ponds, and plenty of hiking trails. Due to its rolling green hills, some liken the island to Ireland. Preserved homes and inns lend it a Victorian charm. Most visitors arrive via ferry from Port Judith, a one-hour trip, but if you’re strapped for time (and not for cash), you can hop a plane at the airport in Westerly for a 20-minute flight.

Plan a trip to Block Island»

With more than 150 beaches—roughly 40 mi worth—Cape Cod has enough to keep any beachcomber happy and sandy year-round. They range from the tourist-packed sand in Dennis to the almost untouched stretches of coast protected by the Cape Cod National Seashore. Favorite activities include swimming, bicycling, and even off-road ("oversand") travel (permit required).

Plan a trip to Cape Cod»

Along the North Shore, Gloucester is also the oldest seaport in the nation. Its trio of beaches—Good Harbor Beach, Long Beach, and Wingaersheek Beach—cools those coming north of Boston for some sun and sand. For a peek at a lighthouse, head to Wingaersheek. For excellent sunbathing, Long Beach is your best bet. For crowds, showers, and a snack bar, head to the large Good Harbor. All three have dunes.

Plan a trip to the North Shore of Massachusetts»

The Granite State’s ocean shore is short, but this state park along historic Route 1 takes full advantage of the space it has. In addition to swimming and fishing, there are campsites with full hookups for RVs and an amphitheater with a band shell for fair-weather concerts.

Think Coney Island on a smaller scale. A ghost town in the off-season, the main drag fills with cruising cars and amblers of all ages come summer. There’s a white sand beach to be sure (lapped by cold North Atlantic waters), but many come to ride the Pirate Ship at Palace Playland, drop quarters at the arcade, and browse the multitude of trinket-and-T-shirt shops. For a meal, grab a slice of pizza and an order of french fries doused with white vinegar.

Just east of Sheepscot Bay on Georgetown Island, oceanside Reid State Park, with its large dunes, is a beach bum’s wonderland. The water is cold much of the year, but it’s a beautiful and quiet place to spend some solitary time looking for sand dollars or climbing the rocks at low tide, exploring tidal pools. Great views can be had from the park’s rocky Griffith Head.

Plan a trip to Mid-Coast Maine»