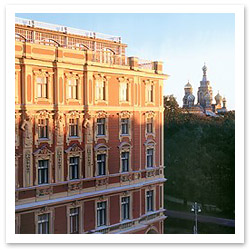 St. Petersburg was designed to be a city at a crossroads — Peter the Great’s “Gateway to the West.” Three hundred years and a few name changes later, the “Venice of the North” is still at a crossroads, only now it’s between pre- and post-perestroika Russia. Nowhere is the contrast between old and new more evident than in City Center, along the grand Nevsky Prospekt between the Neva and Fontanka Rivers. From the iconic Grand Hotel Europe (photo, right) to the unique shopping and wealth of historic and cultural sites, this neighborhood is the ideal base for any trip to the city.

Since 1875, the Grand Hotel Europe has been at the center of the St. Petersburg scene. It’s where Rasputin dined, Tchaikovsky honeymooned, Jane Fonda cooked, and the Queen of England slept. In keeping with the mood of the city, the hotel is enjoying a makeover. Late last year, it opened St. Petersburg’s first Ice Bar, located outside in front of the property’s neoclassical facade (it’s open through the winter months). Built by local ice sculptors, the bar is stocked with top-class vodka and champagne, caviar, and oysters, and is manned by an elaborately bundled-up bartender.

The hotel’s 301 rooms and suites have been spruced up with renovated decor, hypoallergenic mattresses, and modern electronics like flat screen TVs. (As of summer 2006, 120 rooms had been re-done, with the next round slated to start in October of this year.) Additionally, the hotel now boasts high-speed Internet and Wi-Fi capabilities throughout.

Rates start at $340 per night in low season. For more information and details on specials and packages, see www.grand-hotel-europe.com. 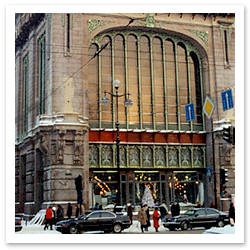 Just outside the hotel’s doors is Nevsky Prospekt, one of Russia’s most famous commercial avenues. Trendy shops and cafés line the street, and most stay open well into the evening.

Local brands are hard to find, but there are plenty of international designers, such as Escada and Trussardi, at the Grand Palace shopping mall (Nevsky pr. 44), and department store-style goods cram the shelves at the glass-roofed Passazh Arcade (Nevsky pr.48). Diagonal to the hotel are the 18th-century archways of the Gostiny Dvor (Nevsky pr.35), a vast yellow building filled with boutiques and vendors; frequented by locals, the complex houses everything from amber jewelry, carved wooden boxes, and lacquered wares to brand name watches, clothing and electronics.

For unique edible items, head a block down to Yeliseyev (Nevsky pr. 56; photo, above). Some call it a delicatessen but it’s unlike any food hall you’ve seen. Inside a handsome building adorned with statues of Greek gods, and lined up underneath the warm glow of chandeliers, are beautiful displays of fruits, vegetables, gourmet foods, caviar, and a staggering number of vodkas. You can also pick up chocolate bars here emblazoned with local monuments, or tea packaged in retro painted tins.

For more traditional souvenirs, the market at the Church of our Savior on Spilled Blood, on the other side of the Grand Hotel from Nevsky Pr., carries Russian dolls, Soviet-era military hats, handmade knits, and other local goods. This is one of the better street markets in the area, though a smaller set-up in front of the St. Catherine Church (Nevsky pr.32) focuses on art work. 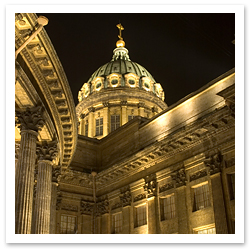 Nevsky Prospekt is also the city’s main cultural artery, leading to such sites as the Hermitage Museum, the monument to Catherine the Great, and the 96 columns of the imposing Kazansky Cathedral (photo, right). Walking between the Admiralty building on the Neva and the bronze sculptures of the Anichokov Most bridge, visitors will pass stellar examples of 18th- and 19th-century architecture, including the baroque Stroganov Palace at number 17, birthplace of the famous beef dish. At number 18 sits the Literaturnaya Café, site of poet Alexander Pushkin’s last meal before he headed to the duel that took his life. Nearby is the picturesque Griboedov Canal, which is no doubt familiar to readers of Dostoevsky’s Crime and Punishment.

On the other side of the Grand Hotel from Nevsky Pr. is Arts Square, surrounded by the Russian Museum and the Mussorgsky Theatre. Just beyond the square are the multicolored onion domes and spires of the Church of our Savior on Spilled Blood. An ornate homage to Tzar Alexander II, who was assassinated on this spot, the Church is a rare example of Russian Orthodox architecture in a city that is otherwise more European in feel.

Café SSSR (Nevsky pr. 54) is one of a number of restaurants and bars that pay ironic homage to Iron Curtain-era Russia. Apart from the red-and-white décor and a few related mementos, there isn’t much in the modern space that screams “Soviet,” but the late-hours, casual atmosphere, and reasonable menu (including blinis to go with the vodka shots) have made it popular with visitors and a pre-club crowd (expect to pay about $25 per person for a meal and drinks).