Coronavirus Leila Najafi Want to Stay in Costa Rica for Over a Year? A New Law Might Help You
Home  >  News   >   Neon Museum to (Re)Open: A Tribute to Vegas’s Past

Neon Museum to (Re)Open: A Tribute to Vegas’s Past 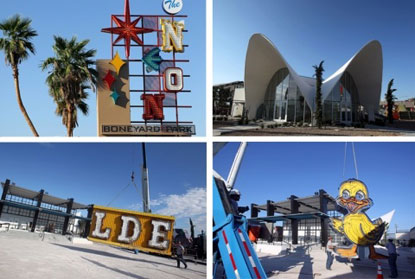 Finally Las Vegas will have a home for its formidable collection of neon art when the Neon Museum officially (and fully) opens its doors to the public on Oct. 27. Inside the two-acre Neon Boneyard sits a collection of more than 150 neon signs dating from the 1930s, the largest collection of electric lights in the world.

Within the boneyard, find signs from Las Vegas’ icons of the past—the Moulin Rouge, the Desert Inn, the Flamingo, and the Stardust along with ghosts of the bygone restaurants, hotels, and businesses that once thrived in Sin City.

Cranes and forklifts are moving signs into their final positions within the Neon Boneyard with the help of Federal Heath Sign Company, which is delivering new acquisitions to the museum including signs from the Sahara, the Frontier, and Fitzgerald’s.

Tourists start their journey in the museum’s new visitors’ center, created from the rehabilitated lobby of the La Concha Motel, a seashell-shaped, Mid-Century Modern architectural structure designed and built by architect Paul Revere Williams. The lobby, originally constructed in 1961 on Las Vegas Boulevard South, sat next to the Riviera. The Neon Museum saved it from demolition in 2005 and moved it to its current location in downtown Las Vegas in 2006.

Nine more restored signs make up the Downtown Gallery on Fremont Street at Las Vegas Boulevard and extends west toward Third Street. Signs in this gallery include Aladdin’s Lamp, The Flame Restaurant, the Chief Court Motel, Andy Anderson, The Red Barn, Wedding Information, the Nevada Motel, and Dots Flowers. Further south, the 5th Street Liquor sign, located on Casino Center Street near Garces Avenue, features a classic example of the type of animation that was frequently used on neon signs of the era, and the Landmark Hotel sign, located on Paradise Road near Convention Center Drive, has been placed near the site where the iconic property stood until its demolition in 2009.

When the Neon Museum opens, visitors can take a 45-minute tour of the space every Monday through Saturday from 10 am to 4 pm. Tickets are $18 for adults; $12 for students with valid ID, senior citizens, veterans, and Nevada residents. Children ages 6 and under are free.