11 Most Endangered Historic Places in US 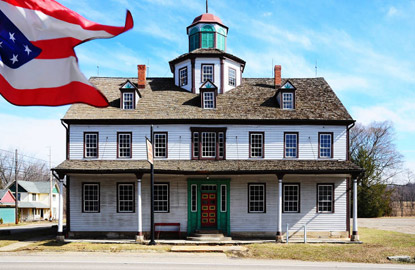 Travel itineraries in the US often include stops at historic sites, where American and foreign travelers alike can soak up the past and reflect on its importance to our present and future. But keeping these bridges, buildings, and districts vibrant and open to the public is not easy. It requires money and public support. And to help garner both, today the National Trust for Historic Preservation released its annual list of "America’s 11 Most Endangered Historic Places." The Trust released its first list in 1988, and to date has named 233 sites across the United States as endangered, whether from neglect, new development, or lack of funding. According to the organization, dozens of sites have been saved through this identification and campaign against their potential destruction.

"For 25 years, our list of America’s 11 Most Endangered Historic Places has called attention to threatened one-of-a-kind historic treasures throughout the nation and has galvanized local preservationists to help save them," said Stephanie Meeks, president of the National Trust for Historic Preservation in a statement to the press.

This year, the sites on the list include the courthouses of Texas, most of which are still active as government buildings. They first made the list in 1998, before then-governor George W. Bush created a program of grants to restore them. Those on the list are the buildings that have yet to be assisted by the program.

Unlike the courthouses, Theodore Roosevelt’s Elkhorn Ranch in North Dakota is not suffering from neglect and disrepair, but from development in the area. A new proposal for a road in the area threatens the serenity of Roosevelt’s historic hunting retreat.

In Philadelphia, the gym where Heavyweight Champion of the World Joe Frazier trained for his iconic fight against Muhammad Ali remains without the protection of historical designation at the local or national levels. According to the Trust’s website, "…inclusion in the National Register of Historic Places will promote the value of diversity within this roster of our country’s most important historic resources."

On Ellis Island, a public health complex, currently part of the Ellis Island National Monument, sits unrestored and closed to the public due to lack of funding. The Trust hopes to raise awareness for the funding necessary to restore these historic buildings.

Other sites on the list include the bridges of Yosemite Valley in California, which are threatened with demolition as part of a National Park Service management plan; a boyhood home of Malcolm X in Boston, which needs funding for restoration; Princeton Battlefield in New Jersey, site of an important battle of the American Revolution, which may be impacted by a new housing development; Sweet Auburn Historic District in Atlanta, the birthplace of Martin Luther King, Jr; Terminal Island in the port of Los Angeles, an important ship-building hub and historic site in the Japanese-American relocation program of the early 1940s; and the nearly 200-year-old village of Zoar, Ohio, representative of America’s role as a safe haven for religious separatists in the 19th century, which is endangered by the possible removal of flood levees.

In her statement, Ms. Meekes emphasized the need for public involvement in the preservation and restoration of these sites. "As it has over the past 25 years, we hope this year’s list inspires people to speak out for the important places in their own communities that help to define our nation’s past – and enrich its future."

To learn more about the National Trust for Historic Preservation and its list of endangered historic sites, visit PreservationNation.org.