There are so many great parks in the Southwest—Zion, Bryce, Arches, Mesa Verde, and the Grand Canyon are the most popular—it can be hard to choose which one(s) to visit. Luckily, now is the perfect time to go—and you can probably see them all, by focusing your road trip on the Four Corners region (the intersection of Colorado, Arizona, Utah, and New Mexico). During autumn’s mild days these parks are extremely comfortable, and with schools back in session, some of these stops will offer more savings and fewer crowds than during summer. Make it a grand circle trip or fly into one airport and out another. Tip: Las Vegas is one of the closest major airports to many of these Southwest parks.

Mix and match from the parks below to create your ideal trip. 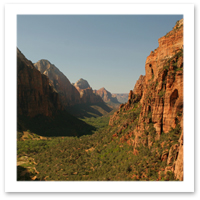 Getting There and Around: In southwestern Utah, not far from the Nevada border, Zion National Park is closer to Las Vegas (158 mi) than to Salt Lake City (310 mi). The nearest commercial airport is 46 mi away in St. George, Utah. Off Route 9, the park is 21 mi east of Interstate 15 and 24 mi west of U.S. 89. If you enter or exit Zion via the east entrance you will have the privilege of driving a gorgeous, twisting 24-mi stretch of the Zion-Mount Carmel Highway (Route 9). Two tunnels, including the highway’s famous 1 1/10-mi tunnel, lie between the east park entrance and Zion Canyon. From April through October, the park’s easy-to-use shuttle system ferries people into the canyon from the Zion Canyon Visitor Center.
Plan a trip to Zion »

Getting There and Around: The closest major cities to Bryce Canyon are Salt Lake City and Las Vegas, each about 270 mi away. The nearest commercial airport is 80 mi west in Cedar City, Utah. The park is reached via Route 63, just 3 mi south of the junction with Highway 12. Bryce has no restrictions on automobiles, but a free shuttle bus system operates from mid-May through September.
Plan a trip to Bryce »

Known for: The largest concentration of natural sandstone arches.

Getting There and Around: Interstate 70 is the speedway that gets you across Utah. To dip southeast toward Moab, veer off the interstate onto U.S. 191, a main artery running all the way south to the Arizona border, skirting Arches’ western border, Moab, and the Monti-La Sal National Forest along the way. U.S. 191 tends to back up mid-morning to early afternoon. Alternatively, you can take Route 128, Colorado River Scenic Byway, traveling just east of Arches. The nearest airport is Grand County Airport, also know as Canyonlands Field, 18 mi north of Moab. Flights are very limited. Plan a trip to Arches »

Getting There and Around: The park is located off U.S. 160, between Cortez and Durango in what’s known as the Four Corners. The nearest regional airport is 35 mi away in Durango, Colorado, a small city worth exploring. Most of the scenic drives at Mesa Verde involve steep grades and hairpin turns, particularly on Wetherill Mesa. Plan a trip to Mesa Verde »

Getting There and Around: The best route into the park’s South Rim from the east or south is from Flagstaff on U.S. 180. From the west on Interstate 40, the most direct route to the South Rim is on U.S. 180 and Highway 64. The South Rim is open to car traffic year-round, though access to Hermits Rest is limited to shuttle buses from March through November. If you visit from October through April, traffic will be lighter parking less of a problem. To go on to the more remote North Rim (closed from mid-October through mid-May), go north from Flagstaff on U.S. 89 to Bitter Springs, then take U.S. 89A to the junction of Highway 67 and travel south on the highway for about 40 mi. Plan a trip to the Grand Canyon »