News Larry Bleiberg You Can Finally Look Inside This Stunning D.C. Landmark. But Only for Another 25 Days
Home  >  News   >   Napier, New Zealand 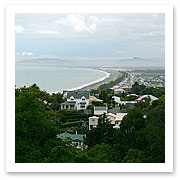 Where: Located on the east coast of New Zealand’s North Island in the Hawke’s Bay area, roughly 400 kilometers southeast of Auckland.

Why: After a 1931 earthquake flattened the city, most of Napier was rebuilt in Art Deco style. Hence, the city has some of the finest examples of Art Deco architecture in the world. But interesting architecture isn’t the only reason to visit. There are more than 50 wineries, plus dozens of shops selling everything from gourmet cheese and olive oil to meat and wild game. Napier is also home to a gannet colony—about 20,000 birds.

Top Outing: Book a self-guided bicycle winery tour. Companies such as Bike About Tours provide visitors with a bike, helmet, and map and set you loose to bike to as many wineries as you can. Stop for lunch at a picturesque winery such as Brookfields. Best of all, when you’re too tired or tipsy to pedal any more, Bike About Tours will come to the rescue (they’ll even transport the wine you’ve bought). 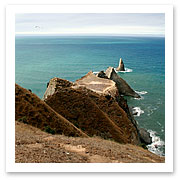 Also Worth a Look: Take a trip out to Cape Kidnappers to view the world’s largest mainland gannet colony. Gannet Safaris takes visitors there in 4×4 vehicles or by helicopter. The birds can be seen from September to early May. One word of warning: the smell is very intense.

Where to Eat: Pick up a copy of the Food and Wine Trail map from the tourism office for tips on where to eat (most restaurants use local organic meat and produce). Two standout restaurants are the casual Cafe Ujazi, at 28 Tennyson Street, and the more upscale Acqua Seafood Restaurant. Thai Chef Restaurant is also worth a stop.

Tasty Bite: Local snapper and crayfish (you can sample either one at Acqua). New Zealand lamb is common in these parts, and is quite delicious (Brookfields Winery does well by this dish). 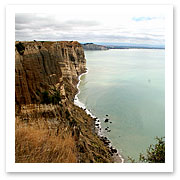 Where to Stay: If it’s luxury you seek, try The Master’s Lodge, which has only two suites and was once owned by a tobacco baron, or Mangapapa Petit Hotel, which is in the heart of Hawke’s Bay wine country.

When to Go: Napier has a mild Mediterranean climate, so it’s ideal to visit any time of year. If you’re after maximum sunshine, though, visit during the New Zealand summer, especially January/February.

How to Get There: Napier’s airport is served by two domestic carriers, Air New Zealand and Origin Pacific, and most flights to Napier depart Auckland, Wellington, and Christchurch. The Auckland-Napier flight is one hour, and Napier is just a five-minute drive from the airport.