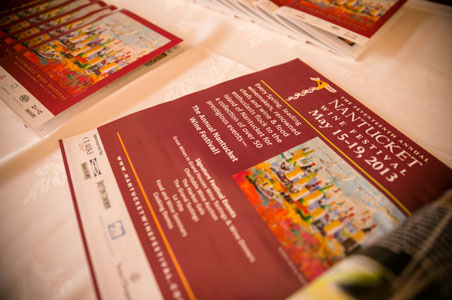 Hop on the train, catch a ferry, or just pop over in your private jet to Nantucket for the Nantucket Wine Festival’s grand annual 5-day wine and food fete. From May 15th to 19th, you’ll be clinking glasses with winemakers and chefs from around the world and living it up with both locals and visiting wine enthusiasts in the storied summer destination of the rich and famous. We caught up with Nancy Bean, Executive Director of the Nantucket Wine Festival, to get a taste of what’s happening and what’s new (a lot!) at this year’s festival.

You and new NWF President Mark Goldweitz have been involved in the Nantucket Wine Festival in the past, but this is the first year the two of you are heading it up. How did you come to take over the festival this year?

Nancy Bean: The Nantucket Wine Festival is in its 17th year. It was founded by Denis Toner, truly out of his love for wine and Nantucket—and his passion for food. He originally developed it as a small festival out in Sconset with a bunch of local people volunteering their time to pull it all together.

I ran operations and developed sponsorships for the festival from 2008-2010, but Denis and team took operations in-house from 2011-2012. During that time, I launched a new food and wine festival in Boston. Mark Goldweitz and I have been involved in a lot of food and wine projects together. Mark has been a longtime NWF supporter and a friend of Denis. He has hosted NWF wine dinners in the past and is very involved in the culinary scene in Boston. He acquired the festival this past summer.

Denis and his wife Susan will be honored guests at the festival. As the founder of the NWF, Denis is being honored this year as a "Premier Grand Cru Luminary."

Aside from the fact that it takes place on an island, what’s one thing that’s unique about the Nantucket Wine Festival?

NB: Winemakers and winery owners are actually in attendance. At our Harbor Gala, we have 41 winemakers (or proprietors of the wineries) from around the world. The winemakers fuel our wine tastings, seminars, and wine dinners. Brahm Callahan is our Wine Director. He has really keen insight into new wineries that haven’t been represented on the island before. We also have an incredible, loyal group of winemakers who have come for years. It’s a beautiful combination. 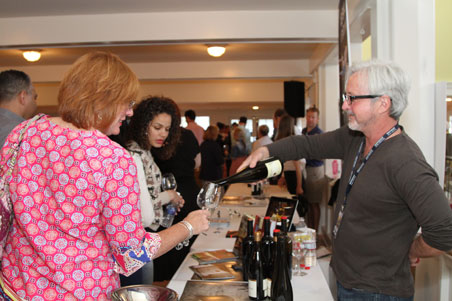 Who are some of the new winemakers you and Brahm have procured for this year’s festival?

NB: Paul Pontallier, the Managing Director of Château Margaux. Having Château Margaux has been a dream of Denis Toner’s for a long time, so that’s really wonderful. We’re just thrilled.

What are some of the new elements you’ve developed for this year’s fest?

NB: We have a new signature event: La Fete. It’s modeled after La Paulée in New York (although it’s not all about Burgundy). Attendees are invited to bring a bottle of special wine from their private collection to share at their table, and we curate each table so there will be a well-rounded portfolio complementing each course of the dinner. There will be five featured chefs and each table will be hosted by a winemaker and serviced by a sommelier.

We’ve doubled the number of Great Wines in Grand Homes dinner events this year, so we’ll have more wine tastings and wine dinners hosted by winemakers in historic Nantucket homes.

We’ve created a mentoring program to engage Nantucket High School students. They’ll compete for a $5,000 culinary scholarship on teams with culinary students in a Junior TOP CHEF competition. The event is open to the public with a $10 donation to the Nantucket Food Bank.

The Culinary Marketplace is something else new that we’ve developed this year. We’ll have live cooking demonstrations by local, regional, and national chefs, artisan food samples, and book signings. Eric Asimov, the Chief Wine Critic for the New York Times, is one of the authors who will be reading and signing his new book, How to Love Wine, in the Culinary Tent.

We’ll also be hosting the traditional Harbor Gala, Grand Tastings, 15 wine and food seminars, and a number of other special events. And the restaurants of Nantucket will be hosting their own wine dinners and tastings throughout the festival.

Was the culinary marketplace conceived with local food purveyors in mind?

NB: Very much so, and we’ve had an amazing response to that. In the past, there hasn’t necessarily been a place for them at the festival. There are some purveyors from off-island, but the majority of them are from Nantucket.

It seems that now the name of the Nantucket Wine Festival is a bit of a misnomer because it’s becoming more of a food and wine festival.

Do you have any plans to shift toward that, or are you going to keep the main focus on wine?

NB: It’s a topic of conversation for sure, and everybody who is learning more about it is saying, "Oh, this is really a food and wine festival." Clearly, that’s the image we want.

In fact, you do seem to give equal billing to both wine and culinary luminaries.

NB: Yes, definitely. We showcase local chefs first and foremost. Nantucket is a culinary destination and that’s why the winemakers want to be at the festival. We have a few new island chefs this year and many other new, up and coming, really fabulous chefs from Boston, New York, Austin, and California. We’re building the culinary focus, not at the expense of the wine focus, but we’re really celebrating that more. It’s one significant enhancement of the festival.

We’re also building the educational piece. We’re starting this sommelier program and we have 16 very high-level sommeliers from amazing restaurants all over Boston and New York coming to the island. Rather than having volunteer pourers at the events, we have a professional somms assisting the winemakers and doing the service.

It sounds like the festival has significantly evolved over the past year.

NB: I feel like it has. Again, it’s about holding fast to keeping it a boutique island event, and it’s got to be about Nantucket. We have a five-year plan that keeps the wonderful traditions of the festival in tact, while letting it grow a bit. But the changes are not about making the festival more commercial. We want to keep it fresh and exciting by inviting new luminaries each year and having exciting events. People welcome change, but they also love seeing the winemakers and chefs they’ve enjoyed meeting in the past.

What has been the most fun part of the work?

NB: It’s been so fun to see how enticing it is for people to be involved. People are so positive about the festival—whether they’re winemakers, chefs, sponsors, or partners. And we have an incredible team. I’m really proud of them. I have to mention Christine Flynn, in particular, who is our Culinary Director. She is phenomenal and every chef loves working with her.

What are you most looking forward to at the event this year?

NB: I’m looking forward to so many things, but particularly Wednesday, when all of the winemakers and chefs arrive from off island and they start congregating at the opening reception, where there will be beautiful, live music, delicious hors d’oeuvres, and the first bottles of the 2013 Nantucket Wine Festival will be opened.