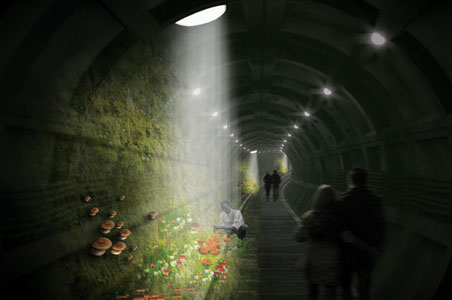 Maximizing urban spaces by incorporating natural elements is becoming a global trend. One of the latest re-imaginings, the "High Line for London" Ideas Competition by the Landscape Institute, has announced its winning idea. And it’s all about funghi. That’s right, London‘s closed Mail Rail tunnel, located under Oxford Street, will soon be the setting for "Pop Down," a subterranean urban mushroom garden by Fletcher Priest Architects. The garden will be lit aboveground by fiberglass mushroom sculptures.

The idea bested 169 others in the institute’s competition, which was co-sponsored by the Mayor of London and the Garden Museum. Inspired by New York City’s High Line, an urban garden space built on the skeleton of an old elevated railway in the city’s Meatpacking District, the competition was even judged in part by Joshua David and Robert Hammond, who co-founded Friends of the High Line in New York.

Runner-up to Pop Down was "The Lido Line" by [Y/N] Studio, a design for a clean public swimming area in the Regent’s Canal running from Little Venice to Limehouse. Other ideas included gardens atop bus shelters, and a park/farm/wetland project build on barges along Canary Wharf.