Beaches Kaila Yu Do You Enjoy Visiting Hawaii? You Should Pay a Fee
Home  >  News   >   8 American Museum Shows to Travel for in 2012

8 American Museum Shows to Travel for in 2012 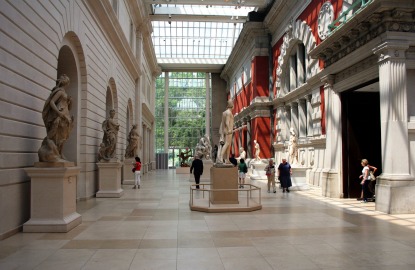 Whether you’re into painting, prints, photography, or fashion, major American museums from Los Angeles to Prouts Neck, Maine, are hosting exceptional art shows worth traveling for this year. We’ve picked the eight best, on now through the end of 2012, so you can plan ahead for memorable, art-filled weekend getaways from coast to coast.

Annie Leibovitz is known for taking glamorous portraits of celebrities for magazines. In Pilgrimage, however, her photography exhibit on now at the Smithsonian American Art Museum, Liebovitz shares over 70 photographs of subjects that shaped her view on cultural inheritance, including the homes of Emily Dickinson, Georgia O’Keeffe, and Elvis Presley, as well as Niagara Falls, Walden Pond, and Old Faithful. In fact, there are no people featured anywhere in this exhibition.

A Vincent van Gogh exhibition at any museum is almost guaranteed to be a success. This year’s show at the Philadelphia Museum of Art should be no exception. Focusing on the troubled artist’s fascination and powerful connection to nature through his still lifes and landscapes from his tumultuous final years, Van Gogh Up Close will display around 40 masterpieces, including Iris, Sunflowers, and Sheaves of Wheat.

The Details: The show runs February 1 to May 6, 2012 at the Philadelphia Museum of Art. Find Philadelphia hotels.

The Steins Collect: Matisse, Picasso, and the Parisian Avant-Garde

For Gertrude Stein and her siblings, art was truly a family affair. After the Steins moved to Paris, they amassed a vast art collection, befriended artists such as Pablo Picasso and Henri Matisse, and gained a reputation as being among the 20th century’s most important patrons of modern art. This winter and spring, New York’s Metropolitan Museum of Art will mount The Steins Collect and showcase some 200 works acquired from Picasso and Matisse, as well as other masters such as Paul Cézanne, Auguste Renoir, and Edgar Degas. The exhibition illustrates the Steins’ relationships with their artist friends and how their tastes for modern art evolved over the years.

Robert Adams: The Place We Live, a Retrospective Selection

As one of the foremost photographers of the American West, Robert Adams’ images have helped visually depict the region’s ever-changing landscape over the last four decades. The Los Angeles County Museum of Art retrospective, The Place We Live, is edited and sequenced by Adams himself, giving visitors a close look at his major and most significant works.

Keith Haring was one of the most popular American artists of the 1980s before his untimely death, at 31, in 1990. His creations are iconic; his style distinct and easily recognizable. With Keith Haring: 1978-1982, New York’s Brooklyn Museum examines the artist’s early career through 155 works on paper, seven experimental videos, and over 150 archival objects including sketchbooks, journals, and subway drawings. This exhibition is the first large-scale show examining Haring’s early years, starting from his arrival in New York City.

The Fashion World of Jean Paul Gaultier: From the Sidewalk to the Catwalk

A retrospective exhibition on contemporary fashion visionary Jean Paul Gaultier will arrive at San Francisco’s de Young Museum this spring. In Gaultier’s world of haute couture and prêt-à-porter fashion, anything goes. From his unconventional runway shows with barnyard animals, to his famous cone bra worn by Madonna on her Blond Ambition tour, this "enfant terrible" has left a unique, indelible, and highly influential mark in his industry, redefining fashion and turning it into an art form. The Fashion World of Jean Paul Gaultier: From the Sidewalk to the Catwalk will feature approximately 140 ensembles spanning over 35 years of the eclectic designer’s career. The multimedia exhibition will also explore Gaultier’s background and influences.

The Details: The show runs March 24 to August 19, 2012 at San Francisco’s de Young Museum. Plus, you can party with the designer himself at La Grande Fete, the exhibition’s opening event, on Friday, March 23 (tickets cost $300; $250 for museum members). Find San Francisco hotels.

The Art Institute of Chicago is gearing up for its major Roy Lichetenstein: A Retrospective exhibit in May, which will premiere in Chicago before traveling on to Washington, D.C., and London. Considered to be one of the world’s most renowned Pop artists, Lichtenstein gets the full treatment in what will be the first comprehensive exhibition since his death in 1997. More than 130 paintings and sculptures and over 30 drawings and collages—both famous and obscure—will be on display, giving visitors a close look at all of the different genres and materials with which he experimented.

The Details: The show runs May 16 to September 3, 2012 at the Art Institute of Chicago. Find Chicago hotels.

Prouts Neck, Maine may not spring to mind as a destination for fine art. For one American master, though, this small town by the sea served as the inspirational backdrop for many of his masterpieces. On September 25, 2012, the Portland Museum of Art will welcome visitors to the Winslow Homer Studio, where the artist lived and painted from 1883 until his death in 1910. The museum purchased the studio (located 12 miles southeast of Portland) from Homer’s great grand-nephew in 2006 and has since restored it to better reflect the time period of Homer’s residency. Over 30 oil and watercolor paintings created during the artist’s Prouts Neck period will be showcased in Weatherbeaten: Winslow Homer and Maine to commemorate the opening.

The Details: The show runs September 22 to December 30, 2012 at the Portland Museum of Art in Portland, Maine. Find Portland hotels.