Museum Hack Shows the Met’s Whacky Side in Alternative Tours

Have you ever gone on a guided museum tour, only to find yourself struggling to stay awake, even amidst the hundreds of historical artworks?

Museum Hack knows the feeling, and they’re out to put an end to it. This innovative ragtag team of museum enthusiasts picked up on the fact that sometimes the traditional museum experience isn’t up everyone’s alley—but that’s totally fine, according to them.

Their zany alternative approach to museum tours is designed to bring the playful, kooky side of the museum out for people who crave a more engaging tour experience. Using New York City’s renowned Metropolitan Museum of Art as their stomping grounds, Museum Hack send small groups on high-energy, "non-traditional" tours to experience a side of the Met you didn’t know existed, with lots of fun and games along the way. 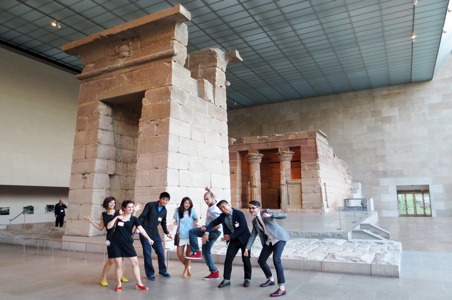 That even the most overlooked museum pieces have a fascinating story to tell is something Museum Hack firmly believes in—but we wanted to hear their story. We chatted with Mark Rosen, lead tour guide for Museum Hack, to get the lowdown.

Buy tickets ($39) for a 2-hour Museum Hack tour at museumhack.com.

Tell us a little about what inspired Museum Hack and how it came about.

Museum Hack came out of a simultaneous love for and frustration with museums. We can’t speak for everyone, but we think it’s pretty safe to say that most people, especially young people, don’t love museums. It’s rare to find a museum-lover who doesn’t have a degree in art history or a related field. We decided to create Museum Hack to appeal to the folks who visit museums, but don’t find them super exciting or particularly accessible.

We firmly believe that all museums, even the Mecca that is the Metropolitan Museum of Art, have a sense of humor and a ton of personality. We want to help people drill down to unearth it in the face of massive crowds and thousands of objects. It’s so rewarding to expose people to a new side of the museum, because whether or not you think the museum is elitist, the artwork certainly isn’t.

We dig for the hidden, unusual, and amazing stories that you wouldn’t typically come across, and craft museum adventures that combine those stories with antics and activities that get you to think about museum experience in new ways. We ultimately want the Met to feel like that really cool person you met at a party and can’t wait to meet again.

Can you give a taste of what exactly a Museum Hack tour entails?

The experience really varies depending on the group’s interests and familiarity with the museum. That said, here are a few things to expect:

–Lots of unexpected and fascinating stories about objects you typically don’t pay attention to (we’re addicted to hunting for alternative history).

-Group activities and antics that loosen you up, force you to spend time with individual works, and play to your innate sense of wonder.

What makes a Museum Hack tour different and better than the normal tours at museums? 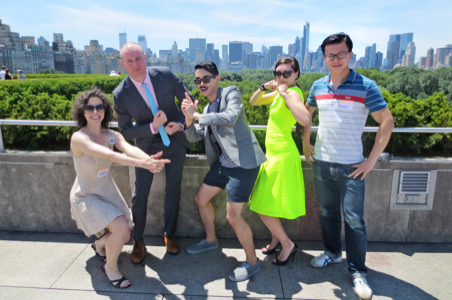 We typically tell people "if you came to the museum today expecting a highly academic, rigorously art historical tour, we sincerely apologize." Museums already provide that for visitors. We create genuinely fun experiences that get you jazzed about museums by breaking conventions. That means talking about artwork in honest "real speak," avoiding the highlights, being a little silly, and exposing you to new ways of tapping into the oodles of resources the museum has available. I wouldn’t say our tours are better, but they’re definitely different.

Can you tell me a bit about the individual tour guides of Museum Hack?

We’re a collective of renegade museum educators who are dedicated to engaging people in museums as real people. We have degrees in art history, museum studies, theater, etc. and have worked in a wide variety of museums. That said, we’re all a little rebellious and believe that the only way to change conventions is to break them.

Do you have any plans to expand the business? If so, which museum would be next? 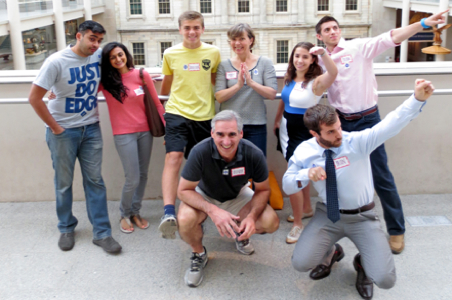 We’d like to expand someday, for sure. The American Museum of Natural History and/or the Brooklyn Museum might be next. They’re mega-museums like the Met and have tons of delightfully whacky bits as well.

What is your favorite museum in the world?

Personally speaking, my favorite museum might be the Chinati Foundation in Marfa, TX. It couldn’t be farther from the Met in every way, but I love that it’s a place that forces you to slow down, intimately experience the work, and remove yourself from the label-obsession you find in most museums. Donald Judd (its founder) was also highly critical of museum practice and I really admire that.

What is your favorite piece in the museum?

Choosing a favorite work is impossible, and my favorites change all of the time. Right now, I’m really feeling a truly strange 18th century armchair hidden in the Visible Storage floor of the American Wing. It looks like any other armchair, except one shocking element—a built in chamber pot (a.k.a, toilet) that would have been hidden under the cushion for your convenience. It forced me to research early American plumbing history and it’s hard not to love that. That’s what priceless masterpieces are made of.

What makes the Met such a great museum? 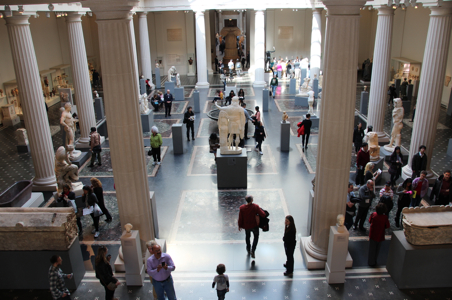 That’s like asking a fat kid why he loves cake…because it’s cake (disclosure: I was a very chubby child so I can crack that joke). The Met is unfathomably massive and encyclopedic; it literally has something for everyone and is full of hidden personality.

What is the craziest thing that’s ever happened during a tour?

There’s never a dull moment with these tours, so all kinds of things happen. There was one time when some folks from my tour were sitting on a bench and a really persnickety older woman stopped the tour to tell us that we were sitting on her bench and needed to move. I quickly moved the group and swore to them all that I hired her to do that. What if I had?