Coronavirus Esme Fox Spain Is Open to Vaccinated Tourists. So, What Can You Expect This Summer?
Home  >  News   >   Oktoberfest Celebrations this Side of Munich

Oktoberfest Celebrations this Side of Munich 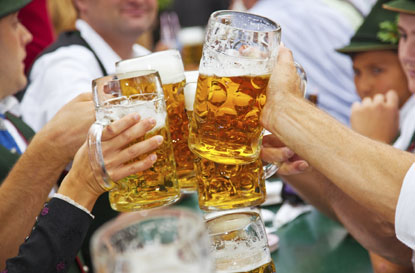 Two hundred years ago, on October 12, 1810, Crown Prince Ludwig (who would later become King Ludwig I of Bavaria) married Princess Therese of Saxony-Hildburghausen. The royal festivities that followed became an annual tradition: the Munich festival now known the world over as Oktoberfest. Its name notwithstanding, the event actually starts in September (this year’s runs from September 18 to October 4).

To celebrate the 200th Anniversary, part of the Oktoberfest grounds are dedicated folk music and dance displays and feature horse races to evoke the original celebration two centuries ago. Of course, most visitors come to experience the fantastic party atmosphere that pervades the event’s 14 beer tents.

Even if you’re not in Munich for the festivities, you can don a dirndl or lederhosen and grab a bier at these local events instead.

Fredericksburg, Texas Hill Country
October 1-3
The summer heat doesn’t really break until late October (sometimes even later). But once the weather cools, the Hill Country comes alive with food and wine festivals, such as New Braunfels’s Wurstfest and Fredericksburg’s Oktoberfest, both of which deliver plenty of beer, German sausage, and good times. October is also Texas Wine Month, with many of the Hill Country wineries offering tastings and special events. This year marks the 30th anniversary of Fredericksburg’s Oktoberfest celebrations, on the weekend of October 1-3. See our Texas Hill Country Guide

Catskills, New York
October 2-3, 9-10
Rising between the Hudson River to the east and the upper Delaware and Susquehanna rivers to the south and west, the Catskills—called Onteora, or “land in the sky,” by the Algonquians and “these fairy mountains” by writer Washington Irving—are among the most visited, written-about, and painted mountain ranges in the country. The Hunter Mountain ski resort stands in for the Alps during the first two weekends of October, when the harvest is celebrated with German and Austrian music, food, and dance as part of Oktoberfest. Watch men imitate courting rituals of the wood grouse during traditional dances; after a couple of beers, you may be tempted to try it yourself. Kids get free pumpkins. See our Catskills Guide

Columbus, Ohio
September 24-26
While past Oktoberfests were held in Columbus’ Brewery District, the current site lies on the grounds of the Ohio Expo Center and State Fair Grounds, about 2 miles from downtown. The three-day, late-September extravaganza boasts three stages of music with everything from polka to hard rock, plus German food, arts and crafts, and a kinderplatz (child’s place) area with kids’ entertainment. This year marks the celebration’s 45th anniversary. See our Columbus Guide

Milwaukee, Wisconsin
Ends October 3
The Bavarian Inn, a baroque clubhouse set on 15 acres displays stone carvings, embellished woodwork, authentic Bavarian coats of arms, and handmade chandeliers. The menu lists continental cuisine such as steaks and hamburgers, along with such classic German fare as sauerbraten and schnitzels. Every Friday, the inn hosts live German music and a fish fry. For four weekends after Labor Day each year, it turns into Oktoberfest central, with dancing, music, and, of course, bratwurst. See our Milwaukee Guide

Epcot Center, Walt Disney World
Year Round
Oktoberfest runs 365 days a year at Biergarten, a cheerful, sometimes raucous restaurant in Epcot Center. Crowds are what you would expect in a place with an oompah band. For a single price ($20 for adults, $11 for kids ages 3-9 at lunch; $29 for adults and $14 for children at dinner), mountains of sauerbraten, bratwurst, chicken or pork schnitzel, German sausage, spaetzle, apple strudel, Bavarian cheesecake, and Black Forest cake await you at the all-you-can-eat buffet. Patrons pound pitchers of all kinds of beer and wine on the long communal tables—even when the yodelers, singers, and dancers aren’t egging them on. See our Walt Disney World Guide

Cincinnati, Ohio
Every year in September, the six-block area around Fountain Square is turned into a German biergarten for Oktoberfest-Zinzinnati, a three-day celebration of the city’s German heritage. It’s the largest Oktoberfest outside Munich, and a more affordable alternative to visiting Germany. This year’s events have already been held, but plan ahead for 2011, don your lederhosen and quench your thirst with steins of beer. There’s plenty of goetta (a German dish made from meat and grain, similar to breakfast sausage), bratwurst, sauerkraut, and strudel to go around, too. See our Cincinnati Guide