News Robin Catalano Horses Run Wild on This Puerto Rican Island⁠—but for How Much Longer?
NewsJust Back from: Touring Vietnam by Motorbike

Just Back from: Touring Vietnam by Motorbike 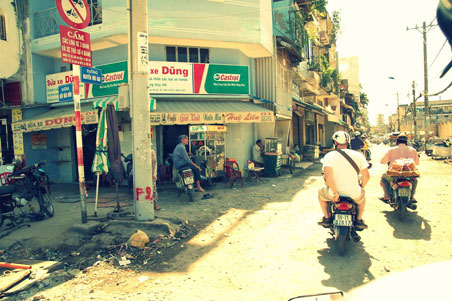 Before arriving in Vietnam, the thought of whipping around on motorbikes was more than a little scary. You’re just so out there in the midst of the frenetic traffic. But the first time my husband Brian and I caught a car taxi we quickly realized two wheels were the only way to go. Ho Chi Minh City’s streets are ceaselessly thronged with nearly six million each cars and motorbikes. I’ll give you one guess which half is moving more quickly.

Threading our way through the maddening, exhaust-choked frenzy on the back of Mr. Sau and Mr. Hoa’s motorbikes our first morning in Saigon (what locals call Ho Chi Minh City), Brian and I caught each others’ eye at every stoplight, grinning from under our helmets. I could tell he was smiling only by the crinkles around his eyes, since he wore the de rigeur face mask motorists don to block the worst of the fumes. 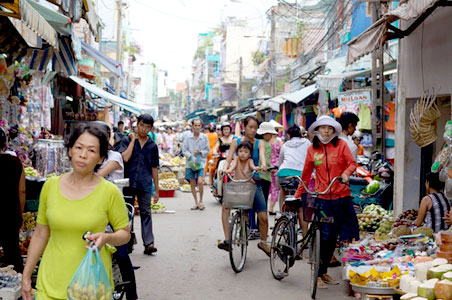 We’d signed up with Saigon Unseen for their Urban Kaos tour, which promised to show us a side of the teeming city most tourists don’t encounter. And indeed, after we whizzed by the major sites, stopping in front of the reunification palace to hear Mr. Sau’s sobering recollection of the fall of Saigon (as a teenager he lost his father to the American war), we set out for the further-flung districts of the metropolis. Jouncing along dirt paths and gravel roads, and squeezing our way through impossibly narrow alley markets where I kept my elbows tucked to avoid clocking the vendors of durian, coconuts, and myriad other wares, we took in the sights and sounds and smells of a city we’d never have discovered on our own.

Stopping in a neighborhood of ramshackle corrugated metal shacks perched on a sluggish, reeking river we unstuck our sweaty selves from the bikes. "Welcome to my home," said Mr. Hoa. We removed our shoes and stepped in to the dim interior. My whining about the WiFi and water pressure at our $37 a night hotel that morning suddenly sickened me. I gazed around his most humble of homes and grasped for something to say.

"Is this your father?" I finally asked, of the photos on the wall by the altar. "Yes. He built this house before I was born," Mr. Hoa answered in his heavily accented English. "You look like him," I said, smiling. What else do you say when thrust into the real world of a life most of us in the west can’t comprehend? He led us back out to the sidewalk to perch on low, plastic stools, and sip inky black coffee on ice, made sweet with a creamy swirl of condensed milk. Mr. Sau answered our many questions about life in Vietnam with unflinching honesty. 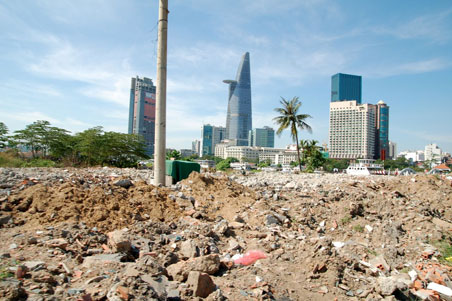 The tour continued to District 2, where we went off-road to bump along the banks of the Saigon River, alongside the detritus of the old city being torn down (pictured above). "They’re building a New Saigon," Mr. Sau explained. District 1, the shiny, bland city across the river, was outgrowing itself, and they needed room to accommodate the expansion.

We were bound for a Tao temple, Ngu Hanh Mieu, at the end of a grassy path. Padding around barefoot in the blessedly cooler temple, we met the caretaker, a man maybe in his 60s. "Many people come here to have their fortune told," Mr. Sau told me. "Would you like yours?" A skeptic of palm-readers and horoscopes at home, I wanted nothing more than to have the solemn caretaker tell my future.

I crouched on the floor in front of an altar and tossed some age-smoothed, carved wooden pieces onto the floor. Then I selected a numbered bamboo stick from a clutch the man presented. He donned glasses, and a button-up shirt over his stained white tank top, and removed a small book from a shelf, flipping to a page corresponding to the number I’d chosen. He read in sonorous tones, and then closed the book, smiling at me.

"You must not be in such a hurry," Mr. Sau said, translating. "Calm down. You have to just be calm." How did this man I’d just met 10,000 miles from home, who didn’t share a language, know I live on constant full throttle? "Be calm. A big change will come soon, in a month. But you have to be calm."

Feeling strangely peaceful in this quiet temple, which was also destined for the wrecking ball, I smiled at the man as I gave him a donation for the temple.

We climbed back on our bikes to continue the tour, stopping for pho, taking in the motorcycle market strewn with thousands of bike parts, meeting shopkeepers, and listening to Mr. Sau’s steady stream of commentary about his city. But my mind kept returning to the temple and the admonition to be calm—advice I took to the streets of Vietnam and to the very different streets back home.