News Apeksha Bhateja A Volcano Eruption Taught Me Something Unexpected About Travel
Home  >  News   >   Moscow & St. Petersburg: If You Like Exploring Communist Legacy

Moscow & St. Petersburg: If You Like Exploring Communist Legacy 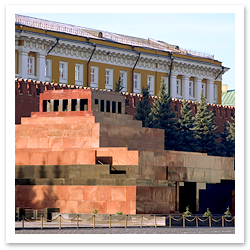 Since the downfall of the Soviet empire, Russia has been struggling to get over its totalitarian past. The monument to Felix Dzerzhinsky, the “Iron Felix” who established the country’s first security service under Lenin, was pulled down in 1991. But it survived that humiliating setback and was reinstalled outside the headquarters of Russia’s federal security service on Moscow’s Lubyanska Prochod.

Soviet culture is still very much alive. Some of the things bequeathed by the Soviets fill Russians with pride, and a number of Soviet icons also serve commercial purposes.

In an ironic twist, some of the businesses which spearheaded the return to capitalism, namely privately-owned restaurants and bars, are exploiting images from Communist times. Some adorn their walls with Soviet memorabilia, and others even re-hash Soviet era dishes. Judging by the booming business, the service must be a lot faster than it was pre-1991.

Lenin’s Mausoleum, Moscow. Many Russians have demanded that the Russian parliament remove Lenin’s tomb to a place where it can rest in peace. (photo, top)

Kirov Museum, St. Petersburg. Sergei Kirov’s unsolved murder in 1936 marked the start of the full-scale Stalinist Terror. This gripping and deeply personal collection offers fresh insights into the horrific way in which Stalin consolidated his power.

Russian Political History Museum, St. Petersburg. The only gallery of its kind documents all aspects of the Communist past, from Soviet realism to the paraphernalia of spying to propaganda.

Moscow Metro. The sumptuously ornate stations are palaces for the public.