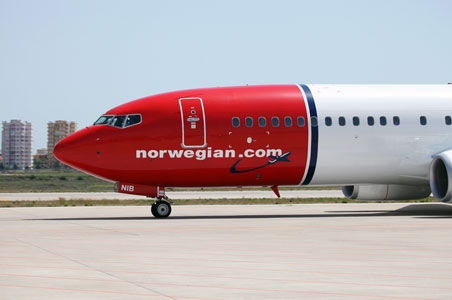 Between mergers and alliances it is getting harder to find airlines which are truly competing with each other, particularly in markets where low cost carriers (LCCs) are not present. For travelers looking to cross the Atlantic Ocean that often means higher fares, even in the off season, as the remaining players are better able to exert control over the capacity available and the rates they’re charging. Two airlines are hoping to capitalize on that gap, offering LCC-levels of service across the pond, with (hopefully) similarly LCC-levels of pricing.

First into the space is Norwegian Airlines. Already established as a significant carrier in Scandinavia, the airline has expanded its coverage to Thailand and the United States thanks to the Boeing 787. Norwegian currently operates from Copenhagen, Oslo, and Stockholm to New York City and Ft. Lauderdale. They have announced plans to expand their Scandinavia service to Los Angeles, Oakland, and Orlando starting in the spring of 2014. The airline is also going to be adding flights from London’s Gatwick airport to New York, Ft. Lauderdale, and Los Angeles starting in July 2014. Introductory fares start at $240 one-way, well below the typical peak summer season rates, though everything from seat assignments to checked bags to meals costs extra so the true price is a bit higher.

Close on the heels of Norwegian is Iceland-based WOW Air which will be launching service between Reykjavik and Boston in spring 2014 using Airbus A320 aircraft. There will be onward connections available to several destinations in Europe from there. WOW is slowly growing as an LCC; it expects to operate to a dozen or so destinations using 5 aircraft next summer during their high season. The carrier is also considering adding larger aircraft to their fleet to make more US destinations viable. At 30-31 inches of pitch the legroom on WOW Air is tight and, keeping with the LCC model, everything other than the basic ticket is charged extra. No pricing is available yet from WOW for the new route.

Both carriers hope to disrupt the market with less expensive offerings for leisure travelers with flexible schedules (most routes are not served daily) and who are willing to sacrifice a bit of comfort for the sake of getting to take the trip. It will be interesting to watch their progress and the response of legacy carriers (not much on that front to date) to see if the market is, in fact, changing.