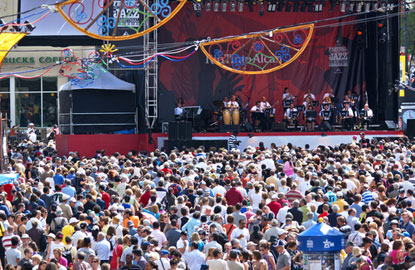 This weekend in Montreal one of summer’s most anticipated festivals gets underway. A small event christened by the late, great Ray Charles that saw the likes of 12,000 music lovers in 1980, Montreal’s Jazz Fest now welcomes more than two million attendees and 2,500 musicians from over 20 countries. Come Friday, the heart of the city’s downtown Quartier des Spectacles, will fill with the sound of music as the Festival International de Jazz de Montréal (as it’s officially called) will kick off its 33rd year with more than 800 concerts—many free—in addition to ticketed indoor events.

The Festival will be launched by native Montrealer Rufus Wainwright who will be performing at the Montreal Jazz Festival (on June 28) for the first time to showcase his new album, Out of the Game. The rest of the lineup includes Norah Jones (who returns after a nine-year Festival absence), James Taylor, Liza Minnelli, Seal, CéU, Esperanza Spalding (the one who beat out Bieber at the Grammys), Chris Botti, Ziggy Marley, Janelle Monáe, Meshell Ndegeocello, Billy Bragg, and electronic sensation Tangerine Dream.

Looking for a little friendly musical competition? The Battle of the Bands pits The Duke Ellington Orchestra against and The Count Basie Orchestra, but if it’s a guitar you desire, the Montreal Guitar Show—which takes place at the Hyatt Regency—will showcase hand-made instruments by 130 respected global guitar makers. Tickets can be bought on-site at the ticket counter of the Grand Salon Opera or the Salon Soprano at Hyatt Regency Montréal for $18.

Details: Though most outdoor events are free, ticketed indoor events vary in time, date, and price. Full schedule and ticketing information can found at MontrealJazzFest.com.

Where to Eat: When you need a break from the hum, Montreal is the perfect city for a culinary timeout. Everyone will tell you to try Montreal’s favorite fast food, poutine, which has French fries smothered in cheese curds and gravy, and you should. A carnivorous feast can always be found at Au Pied de Cochon where the title dish, "pig’s foot," is stuffed with foie gras. Sexy siblings Garde Manger and Le Bremner helmed by celebrity chef Chuck Hughes remain the hottest tables in town, but if you’re just looking for authentic bistro fare, the standout is L’Express for steak frites and glass of Bordeaux.

Head over to Lawrence in the Plateau Mont-Royal neighborhood for a serious mid-morning (or early afternoon) brunch. And after the music, find wine and late night bites on Old Montreal’s St. Paul Street at Barocco and Bocata. At Barocco, you can slurp some oysters with expertly mixed cocktails, while at Bocata an extensive wine list and elevated tapas like beef cheek and burrata await.

Where to Stay: Elegant and opulent, Hotel Le St-James is the indulgent choice, while the less grand, though equally impressive Hotel Nelligan wows overnighters with exposed stone architecture. Music lovers on a budget should check into Le Petit Hotel, a small, intimate spot in the heart of Old Montreal.