News Apeksha Bhateja It's a Tie: The 2 Most Annoying Airline Passenger Behaviors of 2022
NewsMiami’s Hottest New Hotels and Restaurants 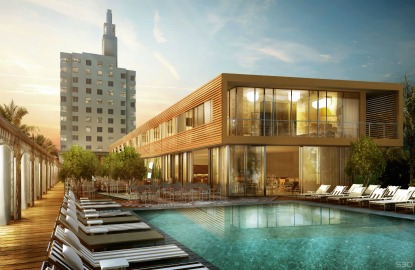 There are always plenty of restaurant and hotel debuts coming out of Miami, but this year’s shaping up to be one of the beach city’s most buzzworthy years yet. Whether your idea of the perfect Miami vacation is dining at the hottest new eatery in town or just bunking down poolside at one of its hippest new hotels, here’s a rundown of Miami’s most anticipated accommodation and restaurant openings.

Miami’s long-awaited SLS Hotel—opening in May in the heart of South Beach on Collins Avenue and 17th Street—promises to be a foodie magnet, with chef José Andres opening an outpost of his conceptual (and just plain fun) Bazaar restaurant there, along with an accompanying food truck (designed by Philippe Starck for quick snacks under the sun). In the meantime, gourmands have been heading to two restaurants that opened late last year: The Dutch at the W South Beach (a branch of Andrew Carmellini’s trendy New York restaurant) and Geoffrey Zakarian’s Tudor House, which serves one of the best weekend brunches in town. Also nearby: The Delano, which just opened new spots for cocktails (FDR Lounge) and sushi (Umi Sushi and Sake Bar).

Coming Soon: There’s a buzz about the major renovations underway at the Hotel Impala, aimed to make the hotel as stylish as The Webster, the tastemaker boutique next door, as well as about the new restaurant at The Raleigh, which Design District favorite chef Michael Schwartz is taking over, set to open this fall.

Over the past few years, the Design District has become a compact mecca of stylish shops, restaurants, and galleries. Chef Michael Schwartz, one of its pioneers, recently opened Harry’s Pizzeria on North Miami Avenue as an extra-casual take on the unpretentious, locally sourced cuisine he built his reputation on at Michael’s Genuine Food and Drink. Standouts include pizza with slow roasted pork and figs, plus a selection of four beers from local microbreweries on tap.

Coming Soon: Over the next few years, expect an influx of international designer shops, most notably Louis Vuitton, to nestle themselves near stylish neighborhood anchors like Christian Louboutin and Marni. Also rumored to be in development: a boutique hotel, with additional retail spaces in its lobby.

One of Miami’s ritziest neighborhoods, Bal Harbour now has a hotel that’s an ideal fit for the swank surroundings: a newly built St. Regis with spacious waterfront rooms and a sleek but just-glitzy-enough design by Yabu Pushelberg. As you’d expect from this upscale chain, there’s an indulgent spa, a restaurant helmed by a celebrity chef (in this case, Jean-Georges Vongerichten), and its trademark butler service for guests.

Coming Soon: The Bal Harbour Shops, directly across the street from the St. Regis, is an ultra-luxe mall with stores from the likes of Chanel, Hermes, and Prada. Due out this year are stores from Moncler and Alexander McQueen, alongside recently opened La Perla and Balenciaga boutiques.

Miami’s vibrant mix of cultures is summed up perfectly at the recently opened Dome Bar in Coral Gables: a sustainably built, Latin American fusion caviar bar (odd-sounding, but delicious nonetheless). At the other end of the city in Sunny Isles Beach—a few minutes’ drive north of Bal Harbour—the popular Acqualina Resort is just about to open Piazzetta, a relaxed restaurant co-run by Il Mulino (which has a more formal location on the property); it also offers gourmet takeout for a high-end picnic on the beach.

Coming Soon: Two hotels in development—a Miami branch of the Marriott/Schrager Edition chain and a new property on 32nd and Collins Avenue that was originally intended to be a Cipriani hotel—are highly anticipated, as is an overhaul of The Tides, one of the original hotels that helped attract style mavens to Miami a few decades ago.

Thinking of a trip to Miami?

For up-to-the-minute hotel and restaurant recommendations, plus the best planning advice, check out our online Miami Travel Guide.