Coronavirus Esme Fox Spain Is Open to Vaccinated Tourists. So, What Can You Expect This Summer?
Home  >  News   >   Top Three Reasons to Visit Mexico’s Capital

Reports of crime, air pollution, poverty, and, more lately, H1N1, have made it easy to dismiss Mexico City as a vacation spot. In the second in a series of articles on travel to Mexico, editor Laura Kidder takes a short trip to the capital and gets another story. It’s one about Aztecs and Spaniards; Frida and Diego; and a sophisticated, multifaceted city of 22 million people—most of whom didn’t catch swine flu and aren’t out to steal wallets.

For years, I was apathetic about—even dismissive of—Mexico City as a destination. My work as a Mexico editor here at Fodor’s focused on resorts, both Pacific and Caribbean. Other editors handled the capital. I had only a vague sense of it garnered primarily from the mainstream media, from the state department Web site, and from connecting flights at Benito Juaréz Airport en route to the beach.

In my defense, the city rarely gets good press, and the view from above isn’t spectacular: sandy earth and sparse, scrubby vegetation; shantytowns that sprawl their way into cramped city blocks; concrete buildings, stadiums, and highways. There’s generally a purple-brown haze.

Times change, interests change, and so do assignments. My turning point resulted from the H1N1 saga, President Obama’s willingness to visit Mexico City in the middle of the outbreak, and raging debates about the safety of Mexico and its capital on Fodors.com forums and elsewhere. I had to experience the city for myself. It took a single long weekend to find three compelling reasons to spend time there—if only for a day or two before a beach vacation or after a business trip. Oh, yeah, and I also find plenty of reasons to visit again.

1) For a Look at Ancient Culture 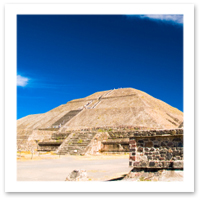 As a proud New Worlder, I was thrilled to discover that you don’t have to leave North America to find cities where ruins are part of the architectural mix. Mexico City’s Zócolo (main square) and the colonial edifices surrounding it sit over an ancient city. Some know it as Tenochtitlán; others as the place where the Aztec leader Moctezuma met the Spanish conquistador Hernán Cortés.

The excavated Templo Mayor, dedicated to the Aztec cult of death, is on the square. Nearby is the Museo del Templo Mayor, holding the kind of cool stuff that make cultures more real: weapons, tools, carvings, and skulls. For a crash course in Mesoamerica, spend a morning here and an afternoon at the Museo Nacional de Antropología, with artifacts from cultures throughout Mexico.

A bus trip to and from Teotihuacán, about an hour northeast of the city and once the hub of an enormous and mysterious indigenous kingdom, takes a half day. Word is that its impossibly broad and misnamed (by the Aztecs) Avenue of the Dead was more marketplace than ceremonial route. This trivia made it easier to cope with the hundreds of vendors who hastened to sell me every type of trinket.

The pyramids are enormous. I made it half way up the Temple of the Moon (126 feet) before my fear of descending all those steep steps took over. The more-than-mere-mortals kept going and/or climbed the Temple of the Sun (210 feet). I, like thousands of visitors before me, opted to simply snap photos of the world’s third largest pyramid from some steps across the avenue. Did I mention that the temples are enormous?

On the next trip: Tour the Museo Nacional de Antropología with an English-speaking guide to take things in properly. Take an excursion to Xochimilco, to see the floating gardens originally established by the area’s first settlers.

2) To Find a Touch of Europe 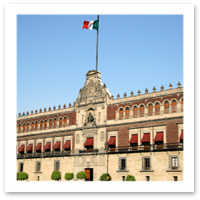 You only have turn your back on the Templo Mayor to encounter colonial Spain. The Zócolo is home to the Churrigueresque-style Catedral Metropolitano, started in 1573 and finished in 1813 or so. Stretching from the Templo Mayor and its museum is the Palacio Nacional, the seat of government since 1524. It was built at Cortés’s suggestion, which might explain its location atop Moctezuma’s palace. Inside, murals by Diego Riviera tell the history of Mexico in just over 1,000 square feet.

Across from the Palacio Nacional is the former home of Cortés himself. A portion of it now houses the Holiday Inn, whose sixth-floor terrace restaurant has fantastic views. This is a great place for a drink (avoid the buffet) or to stop at an ATM in a fairly secure spot (just outside the lobby). Surrounding the Zócolo is the Centro Histórico, whose tidy blocks are lined shops and restaurants in structures built from the 16th through the 18th centuries.

A dozen or so blocks northwest of here, the Paseo de la Reforma, a broad tree-lined boulevard, cuts through the chic Zona Rosa, Condesa, and Roma neighborhoods en route to the Bosque Chapultepec, the city’s main park and home to the Anthropology Museum among others. The paseo is one of the more surprising things about Mexico City: I just didn’t expect a boulevard modeled in 1865 on Paris’s Champs-Elysées. It also surprised me that one of the city’s most popular restaurants is Au Pied du Cochon, where you can get fois gras or other French fare 24/7. By the way, it’s in the Presidente InterContinental, which is where President Obama stayed on his April 2009 trip.

On the next trip: Browse the antiques stores in and around the Plaza del Ángel. Have a treatment in the Rèmede spa at the St. Regis hotel, which opened on the Paseo de la Reforma in August 2009, or the Spa Marquis at the Marquis Reforma hotel, a family-owned classic, also on the paseo.

3) For a Taste of Urban Mexican Style

Style here is often a blend of old world and new, of traditional and cutting edge. There’s one unifying factor, though: nothing is understated. Dishes are well seasoned, architecture is grand, and palettes are vivid. 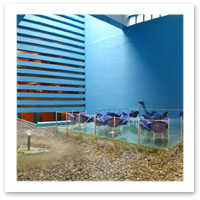 To see what I mean, head to the Camino Real hotel, just north of the Paseo de la Reforma in the ritzy Polanco district. It has clean, modern lines, but the shape and scale of an ancient temple. Its famous designer, Mexican architect Ricardo Legoretta, isn’t afraid of painting one wall or another fluorescent pink or canary yellow. As the sightlines in the lobby and elsewhere are amazing, the works of art throughout are always shown to their best advantage. It’s like being in a gallery—one where you can spend the night or at least grab a coffee, a drink, or a low-key Mexican lunch.

Among the best local style experiences are those in the more lived-in neighborhoods. The district of Coyoacán, south of the Zona Rosa, has lots of old-growth trees and houses with some patina. Among them is the colorful Museo de Frida Kahlo (a.k.a Casa Azul), where the artist was born and died. Every room is filled with memorabilia and artwork, much of it hers or that of Diego Rivera, who also lived here. If, like me, you find the place overwhelmingly intimate and poignant, chill with a soda in the shady courtyard.

Furnishings in the Condesa df hotel are sleek and international. Not so the building and neighborhood in which it’s set. La Condesa, the district next to the Bosque de Chapultepec, has lots of vest-pocket-size parks and architecture from the 1920s and ’30s—all protected by strict zoning laws. I loved the juxtaposition of new and old at this hotel almost as much as the courtyard restaurant-bar. A night out here is both entertaining and safe: after an evening watching wealthy chilangos in their environment, you can ask the staff to get you one of those reliable sitio cabs.

On the next trip: Learn more about 20th-century Mexican art at the Museo de Arte Moderna. Immerse myself in Mexican popular culture at the Museo del Estanquillo and/or the Museo Nacional de Culturas Populares. Eat at Izote (again) or Aguila y Sol for new takes on Mexican cuisine and Hosterìa de Santo Domingo or La Valentina for more traditional dishes.